Democrats are having a shattered-glass crack-up to the continuous good news coming from President Trump on the global peace front. Their famously discplined lockstep ‘narrative’ has gone haywire.

Over in Sweden, a legislator has nominated President Trump for the Nobel peace prize over his role in bringing peace to longtime foes Kosovo and Serbia. That’s the second one who’s done it. It follows a Norwegian legislator’s nomination of Trump this same week for the same prize over his role in brokering an Israel-UAE entente, the biggest peace breakthrough since the Camp David accords, which made peace between Israel and Egypt. That one earned its participants a Nobel prize, too.

Instead of saying ‘nice job’ with a pat on the back, hoping the news cycle moves on, Democrats are going nuts. The Swedes have noticed! Now their responses are absolutely crazy.

Start with sleepy, befuddled Joe Biden, who’s been famously wrong about every single foreign policy issue, according to old swamp thing Robert Gates. For him, this baffling breakout in peace must have just … happened:

Former Vice President Joe Biden acknowledged Thursday that President Donald Trump is making peace between Israel and several Arab states, but he said that he was doing so “accidentally.”

“I think Trump is going to accidentally do something positive here, in terms of this issue of … other Arab states” making peace and establishing normal relations with Israel, Biden told a fundraiser hosted by the far-left J Street organization, as quoted by the Times of Israel.

The Laurene Powell-financed Atlantic had another tack — that with Trump up for it, it’s time to get rid of the prize:

“Giving the peace prize to no one at all is a tradition the Nobel Committee should revive, perhaps on a permanent basis,” Wood continued, arguing “the committee should take a long break to consider whether peace is a category coherent enough to be worth recognizing.”

The article responded to reports that Trump’s name was submitted for the 2021 Nobel Peace Prize by Norwegian lawmaker Christian Tybring-Gjedde for brokering a peace agreement between Israel and the United Arab Emirates, and by Swedish lawmaker Magnus Jacobsson for Trump’s role in an economic deal between Kosovo and Serbia.

The article called Trump’s nomination “preposterous,” suggesting the president’s “main diplomatic maneuver is to adopt a lickspittle posture toward authoritarians.”

See, if Trump creates peace, then it’s time to pick up our marbles and go home. Trump isn’t allowed to create peace.

Meanwhile, over in Nancy Pelosi’s rat’s nest of leftism, news of peace spreading to Bahrain and Israel, in a nuclear chain reaction style, elicited this crazed response from the Speaker well known for her loose grip on reality:

On Friday’s broadcast of CNN’s “Situation Room,” House Speaker Nancy Pelosi (D-CA) reacted to President Donald Trump’s announcement of the normalization of diplomatic relations between Israel and Bahrain by stating she hopes the agreement and other peace agreements will help the region, and “good for him for having a distraction on a day when the numbers of people who are affected and the numbers of people who are dying from this virus only increased.”

A distraction. Just like those paycheck rises to American workers were ‘crumbs.’ Seriously, peace a distraction? From what, her party’s riots? That’s some weird peace potion she’s got going there.

What the crazy array of responses suggests is one thing: That the Democrats have been caught off guard. Trump has stolen one of their proprietary issues, peace, something they claim to know more about than anyone, and like lightning has actually converted their empty promises of peace, premised on kowtowing and appeasement, into real peace.

Better still, he did it without troops, with no the send-troops-first approach characteristic of the neocons, who are among Trump’s most vehement #NeverTrump opponents. He did it with actual diplomacy, that thing the Democrats have claimed they knew all about, but obviously didn’t.

And if Trump wins the Nobel prize from this, as he should, they know they’re going to go even crazier, having even less of intelligence to say than they do now.

There’s just no ‘narrative’ for this for them from their big-money puppetmasters, so their response was atomized, each leftist coming up with a different bizarre take.

What this peace news shows is not just that Trump has been right at every turn on how to create peace, he’s also still extremely good at exposing the left for what it is – taking them off guard, leaving them naked without a ‘narrative’ to repeat in lockstep, and watching them go bonkers in all directions.

One more reason, a very big reason, to vote for Trump. 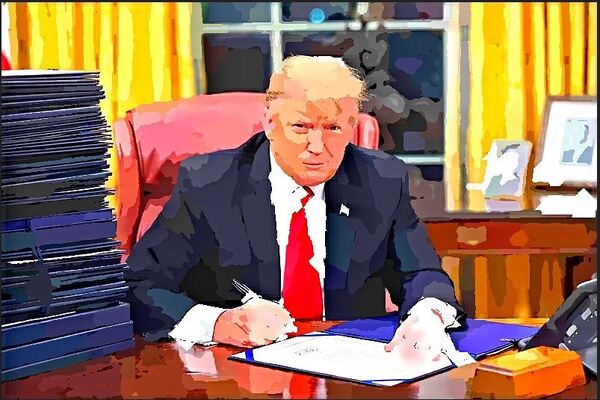