CNN and Other Networks to Boycott Trump Rally in Henderson, Nevada: Report

CNN and other networks will boycott President Trump’s rally in Henderson, Nevada Sunday night according to a report by CNN’s Brian Stelter who claimed concerns about the indoor event and the coronavirus have prompted a decision to only send a pool camera to the rally. 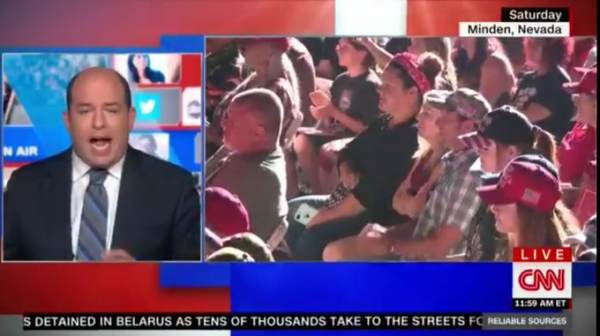 The rally, which was originally planned to be held outdoors at a hanger at McCarran International Airport in Las Vegas was relocated to a heavy equipment manufacturing facility in nearby Henderson. The Henderson rally at Xtreme Manufacturing located at 8350 Eastgate Road is scheduled to start at 7 p.m. PDT.

Both Trump rallies in Nevada this weekend–today’s and last night’s in Minden originally set for Reno–were forced to relocate over concerns by the proposed venues over violating coronavirus rules by Democrat Governor Steve Sisolak prohibiting gatherings of more than fifty people even though the Trump rallies, which the campaign has taken to calling ‘peaceful protests’, are protected under the First Amendment.

The Las Vegas Sun reported the town of Henderson issued a warning about the rally:

…It wasn’t clear how many tickets will be given out for the Henderson rally. Nevada prohibits gatherings of more than 50 people because of the pandemic.

The city of Henderson has warned event organizers to comply with any standing state orders, including those in regard to capacity and face coverings, a city spokesperson said.

In August, the city of Las Vegas issued a $250 fine to the Ahern Hotel for hosting an Evangelicals for Trump event with over 500 attendees. The event was headlined by Trump’s personal pastor Paula White…

Stelter reported the network boycott of the Trump rally on his Sunday program Reliable Sources:

President Trump’s defiance of social distancing guidelines, his denialism about the pandemic is forcing news outlets to make some tough decisions about how to keep their staffers safe. TV reporters have been attending his outdoor events like the one yesterday in Nevada.

Well, later today thousands of people are set to attend a Trump event inside a manufacturing facility in Henderson, Nevada. No social distancing, chairs so close together that they’ll be touching. That’s why some if not all the major TV networks have decided not to send their camera crews inside. Because they feel it will not be safe enough. It’s not wise to go along with the President’s loosey-goosey approach.

A TV news executive source tells me that there will still be a pool camera in the back of the venue to capture the event. But you will not see the usual contingent of correspondents from networks like CNN.

Trump is holding an *indoor* event with thousands of attendees today – no apparent social distancing. So some TV networks have decided not to send their camera crews and correspondents inside. There will still be a pool camera, per a TV news exec source. pic.twitter.com/JbsqSbcLSX

UPDATE: The Trump campaign issued a statement on the rally:

“If you can join tens of thousands of people protesting in the streets, gamble in a casino, or burn down small businesses in riots, you can gather peacefully under the 1st Amendment to hear from the President of the United States.”

The Trump rally tonight in Henderson, NV will be INDOORS.

This is his first indoor rally since Tulsa.