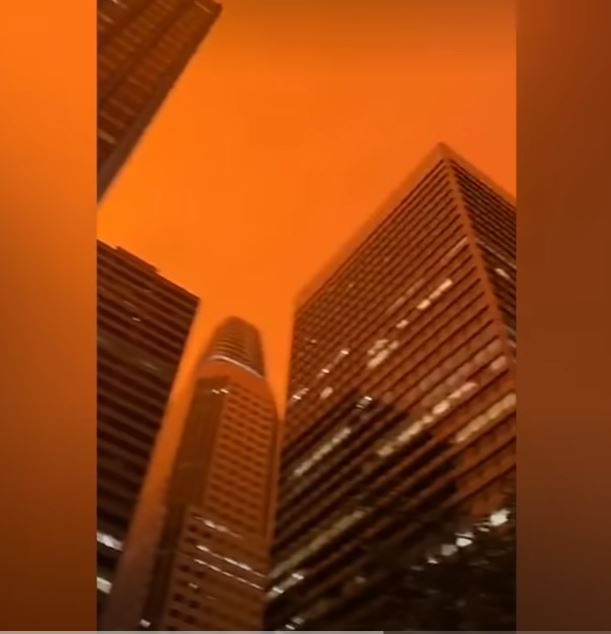 According to California’s governor, Gavin Newsom, global warming did the big fires raving his state, as well as its two ideological sidekicks, Washington and Oregon:

“The debate is over around climate change,” Newsom said as he toured a burn area in Northern California. “Just come to the state of California. Observe it with your own eyes. It’s not an intellectual debate. It’s not even debatable any longer.”

He also said he’s “exhausted that we have to continue to bait this issue.”

“This is a climate damn emergency,” he said. “This is real.”

So don’t blame him.

But there’s every reason to blame him and his greenie policies that are quite literally fueling the destruction.

Since the entire press searchable on Google repeats the global warming blather, I decided to consult some real science and got quite a different picture, and not a flattering one to Newsom.

According to the Cal State University fire scientists, whose website indicates they are the only ones studying this, the number one reason for the increased incidence of California’s fires is:

The forest floor grows dense with flammable dead branches and brush when it’s not cleared out, either manually or when burned. In many parts of California’s wildlands, these forest “fuels” have not burned or been cleared for decades, due in part to fire suppression policies by state and federal agencies.

“One of the reasons we’re observing more fires is because of 100 years of poor Forest Service policy where we didn’t allow prescribed fire or wildfires to burn,” says Craig Clements, Ph.D., director of the San José State University’s Fire Weather Research Laboratory and associate professor of meteorology and climate science.

To understand the history and context of wildfire suppression in the U.S., you have to go back to the Great Fires of 1910. After these enormous wildfires ravaged three million acres across Idaho, Montana and Washington, the then-young U.S. Forest Service made it their singular policy to stop fires whenever possible.

It wasn’t until the 1970s that policy shifted from fire control to fire management, with the recognition that some fire—including prescribed burns—is a necessary part of the wildland ecosystem. But decades of still-unburned forest means today’s wildlands are dense with vegetation that’s ready to spark. Drought conditions have only intensified the impending threat in many parts of the state. (See below for more on this.)

In a 2009 report, Chris Dicus, Ph.D., professor of wildland fire and fuels management at California Polytechnic State University, San Luis Obispo, wrote that before the Gold Rush, there were approximately 50 to 70 trees per acre in California’s forestlands. Today, there are more than 400 trees per acre.

Another contributing factor to the growing forest fuel load is the increasing number of dead or dying trees caused by bark beetle infestations. These insects, along with the drought, are responsible for killing 129 million trees across California since 2010, quite literally adding fuel to the fire.

The sheer bigness of the current rash of fires would attest to a lot of uncleared growth, much of it damaged and dead from beetles. Nobody was allowed to get that out of there because … ecology. Never mind that the natural state of California is to have fires and minimal brush and many wildflower seeds depend on getting a good burning from a fire in order to start. Never also mind that California’s topography, as cited in the piece, can create some big weather patterns as well as fire tornados due to the slopes of the land. Nope, the greenies want California to resemble forest-primeval Wagnerian Germany, with lots of trees and to heck with the climate conditions that include a natural propensity for fires. Uncleared brush and dead trees mean bigger fires.

The second reason listed is ‘climate change,’ but wait: The scientists very specifically cite heat waves, which doesn’t sound like the crazy hot-cold-wild phenomenon bruited about by the climate change lobby. It’s perfectly true that the state has been having heat waves, and yes, the drying action of the heat tends to create tinder for fires. The heats waves come and the heat waves go. They are not a constant of the claim to an entire earth’s temperature heating up, they are the result of high pressure phenomena driving the temperature higher in localized places, which in this case happens to be California.

And where do these heat waves come from? Well, solar activity is one candidate – the world is in a sunspot drought called a ‘solar minimum’ which while it could create cooler temperatures, also leave huge parts of the sun’s atmosphere exposed, according to this U.K. Express article, citing more scientists. The jury is out about what the sunspots do, but there are credible sources that say they do contribute to rising temperatures.

High pressure systems is another. According to HowItWorks.com:

A heatwave is a period of unusually hot or humid weather that lasts at least two or three days – and remaining hot throughout the nights – that affects large areas. Heatwaves are caused by a system of higher atmospheric pressure, whereby air from upper levels of the atmosphere descends and rotates out. As it descends, it compresses, increasing the temperature. The outward flow, meanwhile, makes it difficult for other systems to enter the area, and the large size and slow speed of the hot air causes the heatwave to remain for days or even weeks. The lack of clouds means that an affected area is struck with strong sunlight.

To atrribute the entire global warming phenomena to a localized weather event in one place is kind of absurd.

The third reason cited by the Cal State fire scientists is human activity – leftist housing policies drive poorer people into the wilderness areas where fires are more likely to happen. The scientists say that 95% of fires are caused by people, either intentionally or unintentionally, so….

The proof of the pudding that California’s fires are not caused by some vaguely definely global phenomenon as global warming is in the fact that these fires are only happening in places where bad greenie policy is the rule. California, and its sidekicks Oregon and Washington are up to their necks in these fire-starter greenie policies.

You sure as heck don’t see this stuff going on in Mexico, where there are some fires, but rarely near populated areas, and actually, not many fires at all. Brush is cleared in Mexico. Fire hazards are removed. The weather and topography are about the same as California, except a bit naturally hotter, and we never see these fires.

Seems that the darkl night of global warming, to paraphrase Tom Wolfe, which hovers the world, somehow only lands in California. The west coast governors who blame global warming for their states’ ills would be smart to ask Mexico how to fix this. But they won’t. They’ll just keep blaming global warming and hope it leads to more taxes and more state power. To the rest of us, though, it’s clear enough — California’s localized conditions are the perfect tinder for creating big, big, fires.