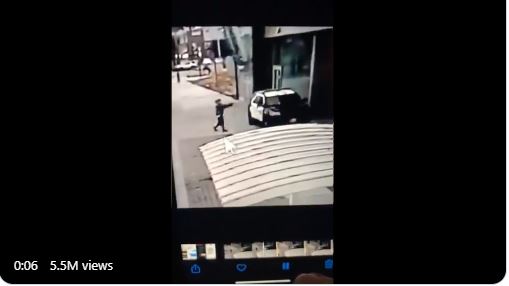 In a demonstration of astounding psychopathetic brutality, Black Lives Matter protestors blocked the entrance to a Los Angeles emergency room as two near-mortally wounded sheriffs, ambushed in cold blood in Compton, were brought in bleeding. And to make sure nobody misunderstood their intentions, they chanted in unison: “We hope they die.”

After deputies issued a dispersal order for the unlawful assembly of a group of protesters blocking the hospital emergency entrance & exits, a male adult protester refused to comply & cooperate…

Here’s the cold-blooded hit-job against the two cops sitting in their car in a well-lit area, done on camera. According to news reports, the victims now in critical condition and fighting for their lives were a male 24-year-old rookie and a 31-year-old mother of a six-year old child.

Update: The gunman walked up on the deputies and opened fire without warning or provocation. pic.twitter.com/cBQjyKkoxJ

Democrats, as of this writing, are silent. The district’s congresswoman, Nanette Diaz Barragan, is focused on keeping her congressional district’s population numbers high enough to keep her seat, is calling for an end to immigration enforcement. Not a word about the crime in her district, including this act with a striking resemblance to a Mexican cartel hit job.

Other leftists are gaslighting, questioning whether the chants ever happened:

Is there any evidence the “we hope they die” chant actually happened? Video? Someone who heard it? Someone admitting to it? I feel like I need a source beyond a law enforcement Twitter account.

And the mainstream media is covering up for them:

In quickly covering the cowardly ambush of two LA County Sheriff’s deputies last night, @ABC’s @GMA disgustingly covered up how Black Lives Matter extremists blocked the entrance to the Emergency Room and chanted “We hope they die,” according to the sheriff’s office. pic.twitter.com/OspPTTeVcW

This is the violent, ugly face of the money-rich Black Lives Matter movement, which is anything but peaceful in its protests. The act done is attempted murder, with stated intent. It’s quite similar to the last thing this protest movement attempted to pull, setting a Portland courthouse on fire with people in it, same as the M-19 Marxist guerrillas of Colombia once did, teaming up with Pablo Escobar. Now they’re blocking hospital entries on critically wounded patients, which is another bid to kill.

Next time some leftist brings this up, it needs to be thrown in their faces. Next time a Democrat brings it up, such a clown needs to be called out. This kind of act is a monstrosity by any civilized standard. The perpetrators must be identified and arrested. No civilized society can carry on without it.