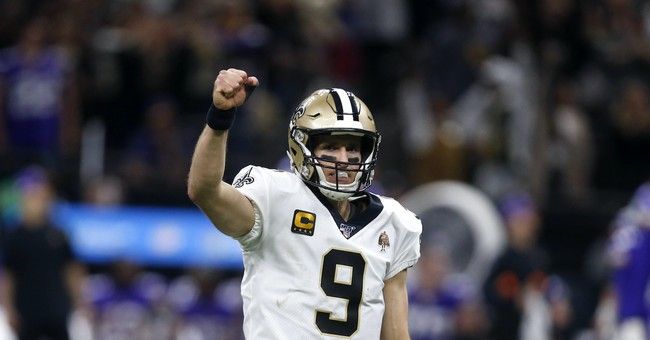 The New Orleans Saints are looking to set themselves apart from the run-of-the-mill social justice message of Black Lives Matter. The team is launching a #SayHerName campaign that focuses on black women in specific. The idea is that black women who are victims of police violence or injustice, in general, are not given the attention that is given to black males who have run-ins with law enforcement.

It’s like the NFL just wants to completely kill football for football fans. The team released a video to introduce their campaign. The message is if you aren’t on board with sports teams using their platforms to express political opinions, then you are a part of the problem.

Too often the intersectionality of racism and sexism creates a unique plight experienced by BLACK WOMEN. For a more just & equal society, we as a @saints team, will dedicate this season to uplifting the voices, exposing the oppression, and highlighting black women. #SayHerName pic.twitter.com/xiPMXAkDXy

You may remember that Saints quarterback Drew Brees found himself on an apology tour after he spoke truth to power in June. He spoke out against kneeling during the national anthem, saying he would “never agree with anybody disrespecting the flag”. When his own teammates came after him on social media, Brees caved and apologized not once but several times. Brees even posted a tweet blasting President Trump for speaking out against kneeling. One of his biggest critics at that time was Malcolm Jenkins. Jenkins now says the team is better for that public battle. Jenkins now says, “If anything the team is probably closer for it, because we’ve had to have those tough conversations.”

“Those tough conversations” led the team to launch the #SayHerName campaign. It’s not original to the Saints – the WNBA already wear shirts with “Black Lives Matter” on the front and “Say Her Name” on the back. Specifically, Breonna Taylor is mentioned as one black female victim who is overshadowed by black male victims. Each week during the football season the players will hold a roundtable discussion about issues related to black women. A video of the discussion will be shown pregame. The video will showcase a black woman who died by police brutality. The players will wear #SayHerName t-shirts before the games.

Linebacker Demario Davis is ready for the cops involved in Breonna Taylor’s case to be convicted, though the case is still under investigation. One of the officers has been fired and two others are suspended. A grand jury has been selected so the case is moving forward. Activists are willing to toss due process aside and assume law enforcement is guilty until proven innocent.

“When there’s so much emphasis on Ahmaud Arbery and George Floyd, she was often being left out of the conversation,” Davis said.

“Her killers still haven’t been convicted, so we wanted to look at a deeper dive into so many stories like hers, where those voices aren’t being heard and those cases aren’t being talked about,” Davis said.

The team owner, Gayle Benson, is supporting the team’s activism.

“Black women — grandmothers, mothers — they’re literally the backbones of community and for them to be left out of the conversation, it’s an extra responsibility on us as Black men to bring their voices and their lives to the forefront,” Davis said, adding that with Gayle Benson being one of the few female NFL owners, it gave them even more of a reason to focus on women’s stories. “The best way to bring change is to be the change, and that’s what we’re trying to do.”

Because of that, the Saints won’t just be focusing on victims of police brutality, like Taylor, they will be hosting larger conversations throughout the season on several topics.

“We believe that uplifting the voices of Black women will help lift up all women, and will uplift our country as a whole,” Davis said. “That’s the stance we’re taking as a team.”

It’s true that black women are “the backbones of community” and that is often because black men abandon their family responsibilities to women and children. Single black moms have been raising children for generations because of the destruction of the black family. That has nothing to do with police violence. Perhaps the Saints can do some more PSAs and encourage black men to step up and be responsible.

The Saints players have brought on an advisory board of black women which includes Washington Mystics guard Natasha Cloud, Maria Taylor of ESPN, MJ Acosta of the NFL Network, Taylor Rooks of Bleacher Report and Chelsea Heyward of the Players Coalition.

If you, like me, are tired of being beat over the head with political messages during sports games, you are part of the problem, according to one Saints player.

“If you need more evidence, if you need to see more, to hear more, at this point, you’re a part of the problem,” Armstead said, quoting Davis. “It’s all out there. Everything’s out there that needs to be said to take a step in the right direction of change.

“It’s at the point now where it’s a disservice to our families, our communities to stick to sports. We have a platform. We have voices. We have opportunity to be expressive and call for change, not just ask for change. We’re out here, boots on the ground trying to make noticeable change.”

The Saints are calling attention to black women and I understand that. It’s true that black men like George Floyd are all but turned into saints themselves, regardless of their criminal past or actions during interactions with police. In the case of Breonna, her boyfriend shot first and caused the police response. The evidence coming out in the investigation points to her past boyfriend’s involvement with drugs and perhaps her home was used by him in his illegal endeavors. We don’t know the complete story yet, as the case hasn’t been completed.

What is missing from the discussion about black women and their victimization is a conversation about women like Jacob Blake’s ex-girlfriend, the mother of his children. Blake is being made out to be just some poor black man who the police killed but the reason he was in that position in the first place was that he was violating a restraining order against him. Not only did he go into her home but he digitally raped her in front of her children, according to reports, before leaving. He was fleeing the police who responded to a call by her. Where are the voices speaking out for her? Kamala Harris went so far as to tell Blake that she is proud of him during a phone call with him. How about the woman, Kamala?

People watch sports as a distraction. This campaign will be in addition to the standard Black Lives Matter message. Drew Brees was wrong to apologize for voicing his opinion in the first place and now he must continue to apologize. He’s a good guy who has devoted huge amounts of time and money to New Orleans and its people.