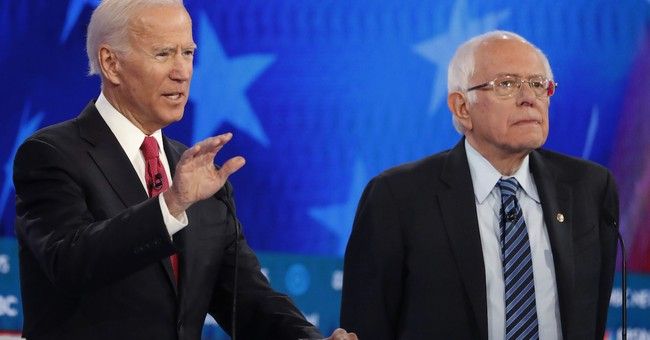 There appears to be a bit of annoyance between Vermont Senator Bernie Sanders and former vice-president Joe Biden on the direction of the latter’s presidential campaign. A report in The Washington Post (covered by John here) suggests Sanders wants Biden to move more to the left on issues and not focus on simply wooing centrist voters.

Sen. Bernie Sanders (I-Vt.) is privately expressing concerns about Joe Biden’s presidential campaign, according to three people with knowledge of the conversations, and is urging Biden’s team to intensify its focus on pocketbook issues and appeals to liberal voters.

Sanders, the runner-up to Biden in the Democratic primaries, has told associates that Biden is at serious risk of coming up short in the November election if he continues his vaguer, more centrist approach, according to the people, who spoke on the condition of anonymity to describe sensitive talks.

The caveat here is WaPost’s reliance on unnamed sources meaning those who leaked the talks (likely within Sanders’ camp itself) don’t want to upset any sort of delicate balance or alliance within the fractious Democratic Party, particularly as it attempts to navigate the populist uprisings of Sanders, Massachusetts Senator Elizabeth Warren, and New York Congresswoman Alexandria Ocasio-Cortez. House Speaker Nancy Pelosi and her leadership team desire remaining in power, after all, meaning their focus is sating the hyper partisans while making sure the more mainstream Democrats rally around their causes. The latter are likely the ones with the money, of course.

Sanders, for his part, admits grumbles with Biden’s campaign but remains ever the Democratic Party creature.

“Of course they’re not true,” Sanders told MSNBC this morning while pushing the Biden campaign to do more than just be ‘Not Trump.’ “I think what people want to hear is what Joe is going to do to raise the minimum wage. And he supports a $15 an hour minimum wage. What he’s going to do to make sure that we create millions of good-paying jobs in the country and he has a very strong plan for the infrastructure. He knows that we can create jobs combating climate change which God knows we need to do seeing what’s going on in the West Coast right now. They want equal pay for equal work, they want us to expand health care to as many people as possible, lower the cost of prescription drugs. I think those are some of the issues that people want to hear more from the Biden campaign about.”

Sanders is correct on one thing: Biden being “Not Trump” only works for a certain segment of the population. It’s a segment that sees Trump as a danger to America and will put however many clothespins and fingers necessary to cover their noses when they go to the ballot box in November and pick Biden. The ones I’ve encountered tend to be more centrist Republicans who believe Biden will restore some semblance of respect for Congress given his role as Chief Congressional Negotiator in the Obama Administration.

Perhaps Sanders’ prodding of Biden is a reminder of his original general election campaign strategy of moving more towards the left on certain issues. The one laid out in The New Yorker in late August even after the Democratic National Convention featured Republicans or ex-Republicans who see Biden as the only way to stop Trump. Biden must stand for something, however, and appearing as some sort of semi-nebulous, calming influence only goes so far. It’s hard to justify especially seeing Biden’s previous record of involvement in the 1994 Crime Bill and his decades in Washington, DC. That might be why Biden wants to stay as amorphous as possible going into November, outside of being “Not Trump.”

But Trump isn’t helping himself by making rather dumb statements like suggesting Biden is “on drugs” to Fox News. Is it any wonder why the 2020 election seems rather nihilistic at times?