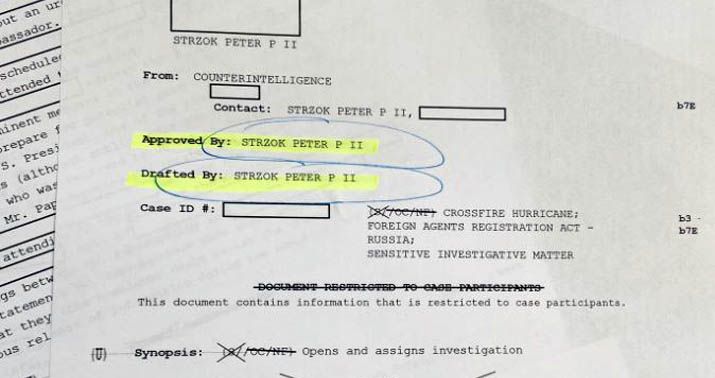 Catherine Herridge obtained an Electronic Communication (EC) via Judicial Watch which announced the launch of the Crossfire Hurricane investigation. The memo was drafted by Trump-hating FBI agent Peter Strzok and also states it was approved by Strzok. Herridge suggests that may be a problem.

“Former senior FBI agent tells @CBSNews that same person drafting + signing off on an ‘EC’ is unusual + may violate the ‘DIOG’ or Domestic Investigations Operations Guide which is the roadmap/rule book for FBI agents. Based on “DIOG, Crossfire Hurricane appears to fall under ‘Sensitive Investigative Matter’ because it involved a political candidate/organization – DIOG states these cases should be brought to attention ‘FBI HQ + other DOJ officials’

is the roadmap/rule book for FBI agents. Based on “DIOG,” Crossfire Hurricane appears to fall under “Sensitive Investigative Matter” because it involved a political candidate/organization – DIOG states these cases should be brought to attention “FBI HQ + other DOJ officials”

It’s worth noting that there’s no need to intuit that this was a “Sensitive Investigative Matter” because the front page of the EC clearly labels it as such. But NY Times reporter Charlie Savage argued that while it’s true a “Sensitive Investigative Matter” has to be approved by higher ups, in this case it was. He highlighted this bit of the IG report which says that Counterintelligence Division Assistant Director Bill Priestap approved the investigation.

The reason @CBS_Herridge put this insight on Twitter rather than in a @CBSNews article is that Strzok’s supervisor Priestap signed off on opening the Crossfire Hurricane case in line with the DIOG, per the IG report. https://t.co/Fn4XDzruEu pic.twitter.com/BlzQ6Fa1aZ

That seems straightforward enough but if Priestap approved the investigation why isn’t his name on the EC? Isn’t that what the “approved by” line is there for? Maybe there’s a perfectly reasonable answer to that question based on how the FBI normally does its paperwork, but given the significance of this document it’s worth asking. The document really does make it look as if Strzok approved his own draft.

It’s also worth keeping in mind that both AG Barr and John Durham said last December that they had disagreements with IG Horowitz on exactly this point, i.e whether or not the opening of the investigation was properly predicated:

On Monday, when the Justice Department’s inspector general, Michael E. Horowitz, rejected one of Mr. Trump’s main attacks on the F.B.I. and declared the bureau had adequate reason to investigate the Trump campaign’s ties to Russia, Mr. Barr again stepped in, issuing a statement saying that the F.B.I. instead should not have opened the investigation in 2016.

“The F.B.I. launched an intrusive investigation of a U.S. presidential campaign on the thinnest of suspicions that, in my view, were insufficient to justify the steps taken,” he said…

John H. Durham, a federal prosecutor whom Mr. Barr appointed to run a separate criminal investigation into the origins of the Russia investigation, backed Mr. Barr’s findings in his own highly unusual statement. “Last month, we advised the inspector general that we do not agree with some of the report’s conclusions as to predication and how the F.B.I. case was opened,” Mr. Durham said.

That doesn’t necessarily mean that this document has anything to do with what Durham has uncovered. Still, given that this is not yet a settled matter and won’t be until we see what Durham’s investigation has turned up, there ought to be a bit of hesitation on the part of reporters to cite the IG report as conclusive on this particular point.