Jane Fonda thinks you’re stupid. Well, not you, maybe. But she sure doesn’t think much of people who watch The View. (And really, who can blame her?) 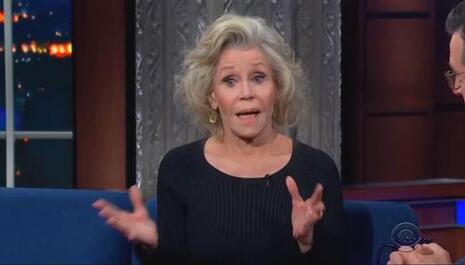 On Sept. 10, Fonda joined the yappers to stress that everything bad in the whole world is that way because of  her pet issue: Climate Change. (Communism used to be her pet issue, which was probably more fun, seeing as how she got to pretend to aim anti aircraft guns at American pilots.)

ABC’s Joanne Rosa helpfully summarized the appearance, saying Fonda “delved into the seriousness of the global climate crisis by drawing attention to its health impacts on Black communities,” and she “explained why she believes the climate crisis and racial injustice are intertwined.”

First of all, the fossil fuel industry very deliberately puts its infrastructures, its wells, its fracking bits, its refineries and incinerators in communities of color thinking that these people don’t have enough power to push back and complain. As a result the people who live there are getting sick, especially respiratory problems which makes them extremely vulnerable to the COVID pandemic.”

Yes, you’re supposed to believe that, from the oil fields of Chicago and the giant refineries of Washington, D.C. to Harlem’s booming fracking industry, the oil barons are making black people sick.

Fonda’s nothing if not an opportunist, and at 82, she’s impressively well-versed in current lefty blather — picking up the lies of the 1619 Project:

What has brought us to this point in terms of the climate crisis comes from the same mentality that brought — that had slavery create the economy in this country. Treating people like they weren’t human, and putting them into bondage. It’s the same mentality.

Except that’s not how the American economy was created. But why nitpick when crazy Aunt Jane is proving she knows all the woke jargon:

Essentially, it’s whatever the hell Jane Fonda and like-minded lefties say it is. Hey, it’s good enough for The View.