Back when the WaPo and other media outlets weren’t campaigning for Joe, sometimes they reported the truth about Biden’s lies 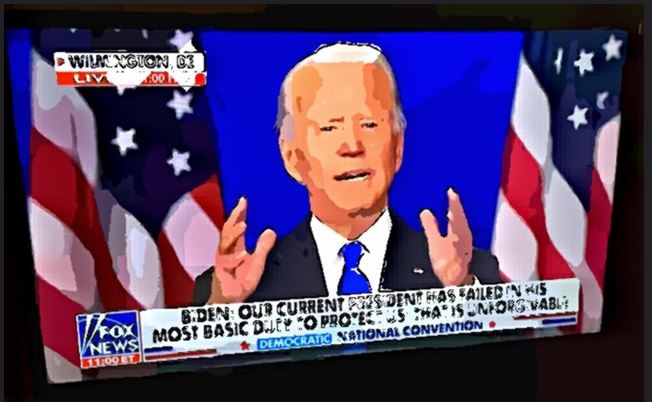 Joe Biden, most of the media, and other Democrats continually attack President Trump for things that are clearly made up or based on anonymous sources.

Meanwhile,  they claim that Trump says things without evidence even when there is evidence.

In 2019, when the Washington Post and other media outlets weren’t actively campaigning for the corrupt, incompetent Joe, sometimes they did their job. The WaPo called out Biden for fabricating a war story.

As he campaigns for president, Joe Biden tells a moving but false war story

This is the God’s truth,” Biden had said as he told the story. “My word as a Biden.”

Except almost every detail in the story appears to be incorrect. Based on interviews with more than a dozen U.S. troops, their commanders and Biden campaign officials, it appears as though the former vice president has jumbled elements of at least three actual events into one story of bravery, compassion and regret that never happened.

Biden visited Konar province in 2008 as a U.S. senator, not as vice president. The service member who performed the celebrated rescue that Biden described was a 20-year-old Army specialist, not a much older Navy captain. And that soldier, Kyle J. White, never had a Silver Star, or any other medal, pinned on him by Biden. At a White House ceremony six years after Biden’s visit, White stood at attention as President Barack Obama placed a Medal of Honor, the nation’s highest award for valor, around his neck.

The upshot: In the space of three minutes, Biden got the time period, the location, the heroic act, the type of medal, the military branch and the rank of the recipient wrong, as well as his own role in the ceremony.

Here are some examples of things the media reported as true even when there was no evidence:

Without evidence, the Atlantic reported that Trump called fallen heroes ‘losers.’  Biden is using this story in ads to attack Trump. The collusion between journalists and the Biden campaign is despicable and dangerous.

Without evidence, the media has repeatedly claimed that Trump colluded with Russia to rig the 2016 election.

Without evidence, many members of the Obama administration committed fraud on the FISA court in order to spy on the Trump campaign as they sought to elect Hillary. They used a fake dossier, by a foreign spy, that was paid for by the DNC and Hillary campaign to justify their unlawful spying.

Without evidence, Adan Schiff, James Clapper and others repeatedly claimed they had absolute evidence of Russian collusion as an excuse for endless witch hunts intended to destroy Trump’s presidency.

Without evidence, Dan Rather targeted George Bush with lies about his military service right before the 2004 election as he campaigned for Kerry.

Without evidence, the NYT ran a fake story in 2008 claiming then-presidential candidate John McCain having an affair with a lobbyist as they campaigned for Obama. After McCain became an opponent of Trump, McCain was suddenly lionized.

Without evidence, Harry Reid claimed then presidential candidate Mitt Romney in 2012 hadn’t paid taxes in ten years as he campaigned for Obama. He certainly didn’t want to defend the policies of Obama/Biden.

Without evidence, the media sought to destroy Christian teenagers for the crime of being Trump supporters. They had to pay for their known lies when at least one of the kids sued them.

Without evidence, the media and other Democrats, including current vice presidential candidate Kamala Harris, sought to destroy Judge Brett Kavanaugh on his nomination for the Supreme Court with phony claims that he sexually abused girls 30 years ago.

Without evidence, the media continues to claim Trump caters to dictators when it was clearly Obama/Biden who catered to dictators.

Without scientific evidence, the WHO claimed the COVID-19 virus would not transfer human-to-human, in a bid to protect China’s ruling communists.

Without scientific evidence, the UN and other supposed experts repeatedly say that oil is causing temperatures and sea levels to rise and increases storm activity in order to push a radical leftist agenda to destroy capitalism and redistribute wealth. How many dire made up predictions have to be 100% wrong before the media does its job and asks questions instead of just repeating what they are told?

Without scientific evidence, California’s Governor Gavin Newsom and other Democrats are claiming that human caused climate change is causing the fires to be worse than ever. It is actually decades of mismanagement of the forests that is the main problem.

Without evidence, House Speaker Nancy Pelosi claims she was set up by a beauty salon owner when she was caught red-handed padding around a beauty parlor against the lockdown rules with no mask on and no social distancing. The media and other Democrats always claim they care about the little guy, but they show every day how they will seek to destroy anyone who gets in their way as they crave power.

Meanwhile, there is much evidence that universal mail in voting can cause a threat to election integrity but when Trump tells the truth, the media says there is no evidence.

When Trump and Republicans tell the truth that Biden and Harris want to defund the police, because it is on tape, the media calls that a lie. Moving funds from the police is defunding. Democrats are now calling the defunding “reimagining the police.”

If Trump or anyone tells the truth about the kickbacks from foreign parties to the Biden family, the media will dutifully say that there is no evidence of wrongdoing. They did the same thing with Hillary. Is there any wonder why there is so much corruption throughout the U.S. by government officials when most of the media only cares about getting the Democrats into power and keeping them in power?

It should be a huge story that the Trump administration is getting new peace agreements between Arab countries and Israel but that great story for the world is essentially buried.

Biden is so stupid that he said Trump is accidentally making peace between Israel and the Arab states. He, most of the media, and other Democrats thought the way you get peace is by giving the biggest sponsor of terrorism hundreds of billions as they pledge death to Israel and death to America. Trump understands that you get peace through strength.

Why would we want to go backwards and start rewarding the tyrants in Iran again and again making the world and Mideast more dangerous.We can only dream that the media will someday report the truth about all of Biden’s lies as they did in 1988. Sadly, they won’t because all they care about is power for the leftists today. .

We know that Twitter, Facebook and Google don’t really care about the truth because they have never blocked the known lies about Russian collusion. They only seem to block things from conservatives, like Trump.

The media is much more dangerous to the integrity of our elections than the Russians, Chinese or Iranians.

It should also be a huge story that Biden clearly is having someone type in answers on a teleprompter in some question and answer sessions?  Can anyone imagine the reporting if Trump had to read his answers to questions instead of having the knowledge to answer the questions?

Funny how they notice nothing when leftist power is at stake. The proof of the pudding is in their wayback machine, back when they once fact-checked Joe Biden.