In Wisconsin Campaign Stop, Mike Pence Says 2020 Is About Whether ‘America Remains America’ 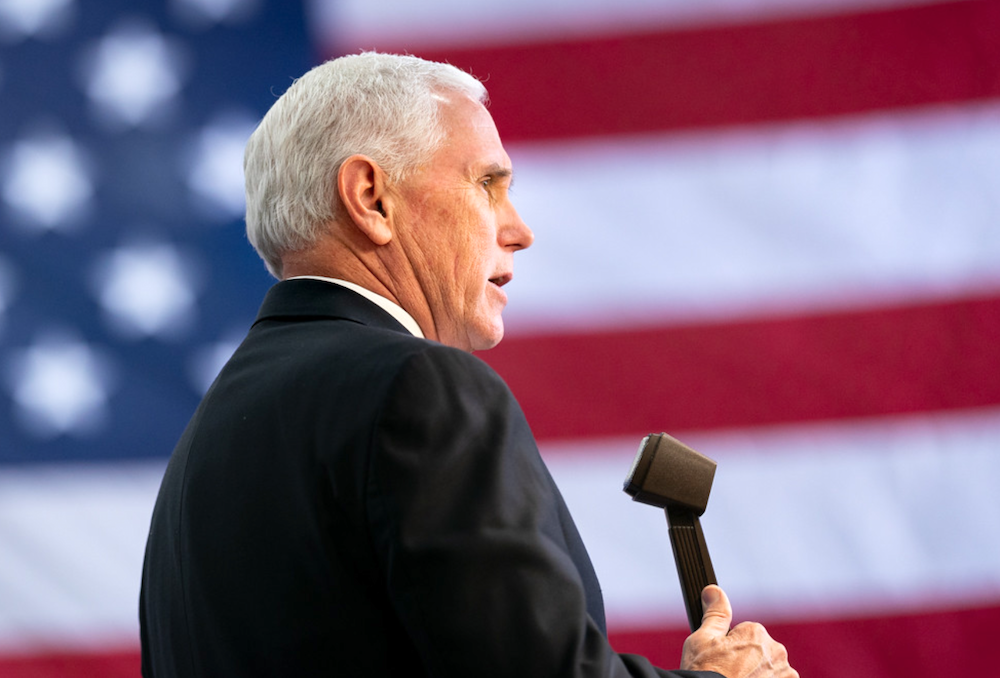 JANESVILLE, Wis. —Supporters of the Trump administration filled the Holiday Inn Conference Center Monday morning to welcome Vice President Mike Pence, who made a stop in the Dairy State just three weeks after riots broke out 70 miles east in Kenosha and just 50 days before the 2020 election.

At the door, organizers distributed hand sanitizer and face masks — for those who weren’t already sporting red, white, and blue masks or Green Bay Packer masks — and chairs were distanced throughout the rally room. Attendees of all ages turned out, filling the seats, with people left standing along the periphery.

Crowd gathering in Janesville, WI to hear from @VP Pence. Chairs are spaced out, and organizers are handing out masks and hand sanitizer at the doors. @FDRLST pic.twitter.com/cVUh3SllmJ

Springboarding off the recent southern Wisconsin mayhem, law and order was the most prominent theme of the event, as Republicans sought to draw a stark line between the two parties’ stances on the violence. Both Rep. Bryan Steil, R-Wis., and the vice president thanked police officers, who received a grateful standing ovation from the crowd.

Pence also condemned the rioting that has plagued America’s cities over the summer. The most recent victims are two Los Angeles County sheriff deputies, who were shot in the head in an ambush over the weekend.

“The president and I will always support the right of Americans to peaceful protest,” Pence said, echoing his remarks from Fort McHenry in late August. “But rioting and looting is not peaceful protest. Burning businesses is not free speech. bringing violence against innocent civilians or those in law enforcement must stop, and it must stop now.”

Cheers rang out as the vice president continued, reminding supporters that the Trump administration sent 200 federal law enforcement officers into Kenosha to work with state and local officers to bring an end to the violence.

“For months, all Joe Biden ever talked about was peaceful protesters, as the American people watched businesses and communities in our major cities burn. Two weeks ago, he did condemn violence in every form it takes, but right after that, he criticized law enforcement,” the vice president said of the Democratic presidential nominee. “Joe Biden has never called out his campaign staff or his running mate for raising money for bail for violent criminals, and he still hasn’t called on Democrat mayors to get their cities under control.”

Pence doubled down on the former vice president, whom he called “nothing more than a Trojan horse for the radical left,” saying:

You know, the truth is, Joe Biden would double down on all the policies that have led to violence in America’s cities. When you signal a lack of support or waning support for law enforcement, it emboldens those — it emboldens those who threaten our families and our cities. So let me be clear, we’re going to stand with the men and women who serve on the thin blue line of law enforcement, whether it’s in Los Angeles or Rochester or Kenosha, we are going to back the blue.

“I’ll make you a promise,” Pence pledged. “We’re not going to defund the police, not now, not ever. President Trump knows and the people of Wisconsin know, we don’t need to choose between supporting law enforcement and standing with our African American neighbors, or any of the minorities that live in our cities. … We have done both for three and a half years, and we’re going to do both for four more years,” Pence said, his comments evoking chants of “four more years!” from the crowd.

‘It’s Going To Be a Landslide’

“I think it’s going to be a landslide,” Tammie Smith told The Federalist. Smith, who drove two hours from Manteno, Illinois, about an hour south of Chicago, said she’s excited to go to the polls to vote for Trump on Election Day, despite having received a ballot in the mail, courtesy of the Democrats’ push for mass mail-in voting.

“If we want freedom, we better vote for President Trump,” Mary D’Agostino, a 69-year-old from Rockford, Illinois, told The Federalist. She said she’s concerned for what kind of country this generation will leave to her grandchildren.

“Freedom,” D’Agostino replied when I asked her what she thinks is the most important issue at stake in 2020. “And this,” she said, smoothing out a fold in her mask to reveal the words “Make America Pro-life Again.” “I just can’t believe [abortion] is legal.”

Defunding Planned Parenthood was another theme of the vice president’s speech, as were religious liberty, jobs and the economy, affordable energy, China, and the Wuhan coronavirus. Supporters signaled their approval with enthusiastic cheers when Pence indicated his support for reopening businesses and getting kids back into classrooms: “We’re opening up America again, and we’re opening up America’s schools.”

Like Smith, D’Agostino is hopeful for the election. “I do believe President Trump’s going to win,” she said, although she’s “a little afraid” to show her support by putting a Trump sign in her front yard for fear rioters might take out their wrath on her house.

The enthusiasm in Janesville was reminiscent of the palpable Trump support in Kenosha during the president’s visit, following the shooting of Jacob Blake and the ensuing riots that left businesses burned and the town in shambles. While many on the left who talked to The Federalist said they aren’t fans of Biden but merely want to get Trump out of the White House, the president’s supporters are excited to vote for him. As MAGA cheesehead-wearing Danell Vincenti told The Federalist in Kenosha, “We love our president, and he’s got our support 100 percent.”

Like during the 2016 election cycle, the GOP ticket is rallying its base and prioritizing flyover country, where swing-state voters are feeling the toll of the lockdowns and are concerned about violence infiltrating their communities. Wisconsin is no exception. Trump visited Kenosha earlier this month, Pence stopped in Janesville today, and the president will return to Mosinee, a city with a population of fewer than 5,000, for a rally later this week.

“In this election, I think 50 days from now, it’s not going to be so much whether America ends up more conservative or more liberal, more Republican or more Democrat, more red or more blue,” Pence said, as if reading the minds of so many concerned Americans. “I think the choice in this election is whether America remains America.”