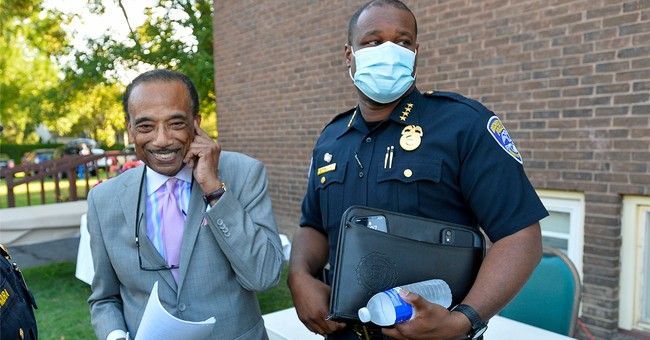 As John reported last week, the Chief of Police in Rochester, New York resigned, along with his entire command staff, in the wake of riots and unrest over the death of Daniel Prude following his arrest in March. The mob taking to the streets had already injured three police officers and engaged in the usual acts of arson so many cities have experienced this year. Chief Le’Ron Singletary was scheduled to depart at the end of the month after a replacement was identified, but that apparently wasn’t good enough for Mayor Lovely Warren. She fired Singletary yesterday, effective immediately. (NY Post)

Rochester Mayor Lovely Warren on Monday fired Police Chief Le’Ron Singletary over his department’s handling of the death of Daniel Prude — less than a week after the top cop announced his intention to retire at month’s end.

“This initial look has shown what so many have suspected, that we have a pervasive problem in the Rochester Police Department,” said Warren in a press briefing announcing the shake-up. “One that views everything through the eyes of the badge and not the citizens we serve.

“It shows that Mr. Prude’s death was not taken as seriously as it should have been by those who reviewed the case throughout city government at every level.”

In addition to firing the Police Chief, Warren suspended both the City Attorney and her communications director for thirty days without pay. The message she’s trying to send seems to be clear and the audience for that message is obviously the mob that has swollen to numbers in the thousands.

The new investigation into Prude’s death isn’t even two weeks old and can’t possibly be close to a conclusion yet. This makes the Mayor’s decisions here seem all the more arbitrary and capricious. And given the history of events in Portland, Seattle, Minneapolis and Chicago (among other cities), it seems highly unlikely that the angry crowds are going to be satisfied with these actions or return the city to a normal state of order.

It may indeed be necessary to take a fresh look at Daniel Prude’s death, but the conclusions being drawn by both the media and the mob are far from obvious. The body camera footage that’s been released definitely paints some of the officers in a bad light for the gallows humor on display during the arrest and the jokes being made at Prude’s expense, but poor taste and disrespectful comments are a far cry from murder or the other serious charges being alleged. As we discussed here previously, Prude had a long history of mental health issues and drug addiction.

On the same day of his fateful encounter with the cops, police had already taken him to a hospital for a psychiatric evaluation at the request of his family after he had threatened to do himself harm. After being discharged a few hours later, Prude was massively high on PCP and running around in the street naked when his brother called 911 yet again. Prude began spitting on the responding officers, who had no idea of his COVID status or other health issues, aside from his mental illness. The paramedic who responded to the call along with the cops declared that Prude had “coded” because of a massive PCP overdose, not the effects of having a “spit hood” placed over his head.

So it’s possible that some corrective action and adjustments to the procedures followed by the cops that night are in order. A thorough investigation should be able to determine what’s required. But it’s not at all clear that this incident bears any resemblance to the death of George Floyd. The Mayor of Rochester appears to be overreacting without all of the required information in an effort to appease the mobs in her streets. And that’s an effort that is almost certainly doomed to fail.