RUSH: Trump has weighed in on the National Football League and its opening weekend. Here’s the story on the ratings. And they come from Deadline.com. In numbers certain to change because we have the overnights, and as the day goes on, we’ll have the rest of the country added in. But the overnight ratings saw a fall of 28% in the ratings from Sunday night last year to Sunday night this year. The Sunday night game last year I think — no. Now I’m not sure which it was. The Steelers were either the Thursday night opener or a Sunday night game, the Patriots, got blown out 33-3. That game rated higher than the blowout — well, it wasn’t a blowout. It was actually a very close game last night. 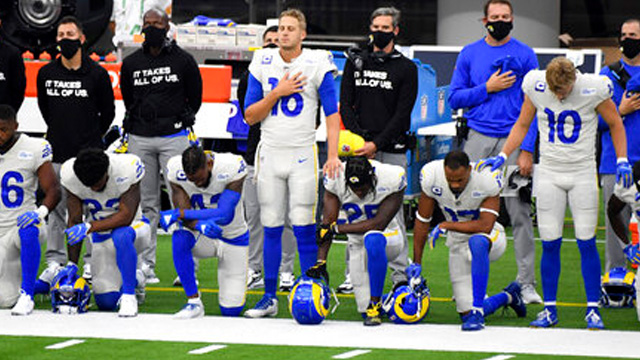 So a 28% drop in the ratings. A hard decline of 23% in the number of eyeballs from the September 8, 2019, official start of Sunday Night Football. So ratings, that’s number of sets, number of TVs in use, down 28%. Twenty-three percent drop in eyeballs. That’s number of people. So either way you cut it, it’s a dramatic drop in the overnights. This is early Nielsen data. It does not have West Coast numbers, for example. They’ll be added in later, which is important because one of the teams playing was the Los Angeles Rams.

So the numbers are gonna pick up from what the overnights were. But for some context, the 33-3 pummeling of the Pittsburgh Steelers by the New England Patriots last year went on to pull an audience of 22.2 million on NBC, which pretty much even for Sunday Night Football 2018 premiered. The numbers last night — 14.8 million viewers. So that’s the 22% drop, the 23% drop, 22 million in 2019, 14.8 million last night with the left coast to be added. So the numbers will go up somewhat. But it’s flat at best. 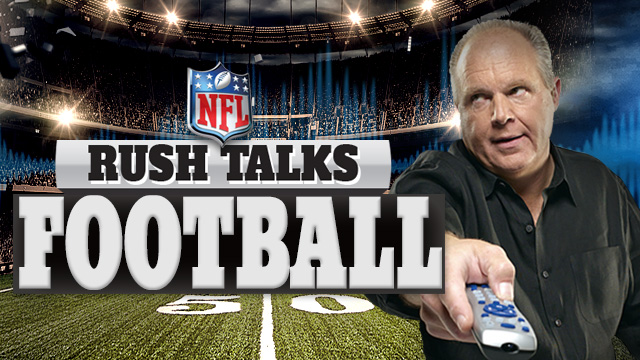 And here’s another textbook example of it. Colin Kaepernick tweeted yesterday that the social justice messaging that took place during the opening weekend the NFL is more lip service than legitimate. Kaepernick tweeted, “While the NFL runs propaganda about how they care about black life, they are still actively blackballing my friend Eric Reid for fighting for the black community.”

Here’s the president at his rally in Henderson, Nevada, last night his comments on the NFL.

THE PRESIDENT: Let’s have a little fun. We got plenty of time, I mean here… (:04 seconds cheers) I mean, you know, what do we have? Football’s boring as hell. (:06 seconds cheers) It’s just not the same, right? I don’t know. It used to be said, people would say, “Hey, could you keep it away from a football game?” Now they say, “Could you possibly do it during a football game. (laughter) We have some free time.” 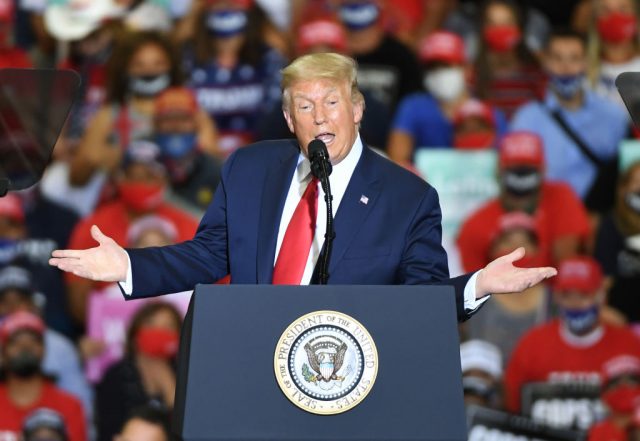 The Seattle Seahawks and Atlanta Falcons — now, this was interesting. The kickoff. And I think it was the Seahawks that kicked off. I’m not sure. Doesn’t matter. Every player took a knee. Offense and defense. The only player that moved was the kicker. He kicked the ball, ran to the ball, kicked it, the ball ends up in the other end zone, not a single player moved. They were all on their knees during the kickoff which starts the game. 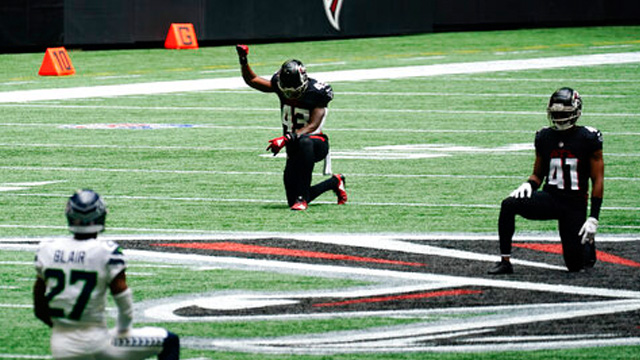 The NFL, however, for its purposes is not happy with something that happened yesterday. You know what it is? Not everybody was wearing their masks on the sideline. NFL policy was flouted. NFL policy was flaunted. The NFL doesn’t like it. And so today the National Football League has warned teams of potential discipline for failure to properly wear their masks. Of all the things that happened, this is what the NFL is upset about today.

Troy Vincent is the executive vice president of football operations for the NFL. He sent a memo to all general managers, to all head coaches, to all athletic trainers regarding the joint NFL-NFL Players Association protocol. He said, “We must remain vigilant and disciplined in following the processes and protocols put in place by not only the league, union and clubs, but also by state and local government. Becoming careless or ignoring face covering and physical distancing requirements will put the 2020 season at risk.”

The memo then reminds all the recipients of the memo that the protocol requires everybody with bench-area access — this would be coaches, trainers, medical staff, they all are required to wear face cover — i.e., masks at all times. “Two of our stadiums are in locations in which this requirement is mandatory for all individuals, including players. Failure to adhere to this requirement will result in accountability measures -”

Anyway, so while they’re demanding that everybody on the sidelines, from the coaches to the medical staff to the trainers to whoever, all wear masks and all maintain social distancing, right out there on the field you got 22 players not wearing masks who are not maintaining a social distancing of six feet. They’re out playing the game of football. They are exchanging bodily fluids in one of many different ways, including sweat and spit, and there are no steps being taken whatsoever to mitigate. And yet the league is insistent that over there on the sidelines everybody wear the masks. 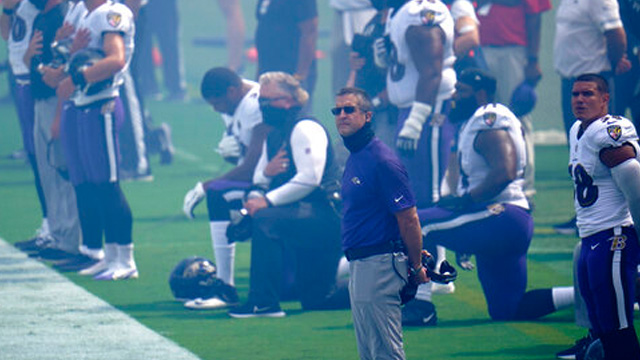 Now, to me — look, I understand the league. They’ve got a bunch of local and state authorities that they have to keep happy here if they’re gonna get exemptions to have these games played eventually with fans in the stands. But just the hypocrisy of this is illustrative of the cockamamie aspects of all of it. If you can have 22 guys out there playing the game and not protected in any way, then you’re gonna get upset over people on the sidelines not wearing masks and so forth — is it okay for the 22 guys playing to get infected? Is it okay that they run the risk? Is it okay that they take no steps at mitigating?

Well, obviously it is because if they were to wear masks and if they were to maintain proper social distancing, guess what? There wouldn’t be any games. No way you can play football with a social distancing requirement of six feet. And there is no way you’re gonna get top athletic performance from skilled players wearing masks who need to be able to breathe unencumbered.