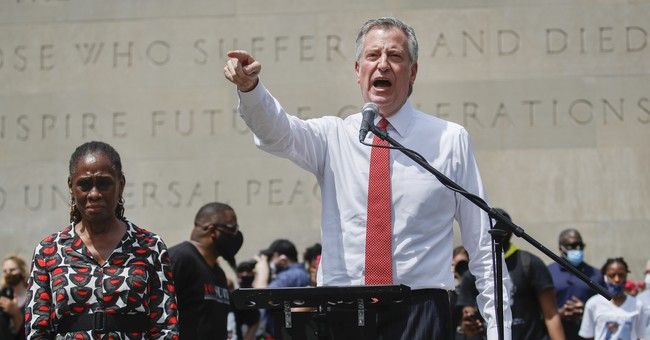 It was only this week that one of New York City Mayor Bill de Blasio’s fellow Democratic colleagues ran an advertisement calling him “the worst Mayor in the history of the city.” It really takes a significant effort to build up that level of disunity in your own party. Earlier this month, the New York Post editorial board declared that Hizzoner was no longer in any condition to function and was desperately in need of a vacation. It’s rare to find this level of bipartisan unity in politics anywhere in America these days, but the consensus seems to be clear. Mayor de Blasio has been a disaster and he should probably take a break.

Well, the good news arrived only today. People will be getting their wish. The Mayor is furloughing his entire, massive staff for a week. And he’s furloughing himself in the process. (NY Times)

Mayor Bill de Blasio on Wednesday is expected to announce that he is furloughing his own staff at City Hall, himself included.

The policy would affect 495 mayoral staff members, who would have to take an unpaid, weeklong furlough at some point between October and March 2021. The furloughs would apply to everyone from administrative assistants to Mr. de Blasio and the office of his wife, Chirlane McCray…

Facing a $9 billion, two-year revenue shortfall because of the coronavirus’s impact on the economy, Mr. de Blasio this year closed the city’s budget with $1 billion in unspecified labor savings.

Sadly, as much as I’ve enjoyed making fun of this news, the really good part of it isn’t even real. While de Blasio will technically be furloughed, he plans to stick around and continue “working” the entire time, albeit without pay. The same will likely be true for many of his aides.

The underlying plan here is ostensibly to save the city some money because they’re facing a massive shortfall. De Blasio has already warned that he may have to lay off tens of thousands of workers if the city doesn’t receive some combination of bailouts from the state and federal governments, a prospect that looks unlikely to say the least.

But this is all just window dressing anyway. The amount of savings realized from slashing his staff’s budget for a single week is $860,000 That’s a lot of money to most of us, but it’s a drop in the bucket compared the gaping budget hole that the city is facing. He’s going to need to find a way to come up with billions in some combination of savings and revenue, or the municipal government is going to be hamstrung.

In his generosity, the Mayor has said that his wife’s staff would also be furloughed for a week. If he’s looking for bigger savings, perhaps he could consider just cutting her staff since she’s not an elected official with any duties anyway. And as the local press is fond of pointing out, Chirlane McCray’s 14-person staff costs the taxpayers more than two million dollars per year. And her “contributions” have been dubious in quality, to say the least.

The city has lost more than a million jobs since the virus blew into town. That translates to a million people no longer paying local taxes. Landlords aren’t being paid rent, so they’re starting to miss their payments as well. Revenue is way down across the board. The Mayor’s request for five billion dollars in long term loan relief from the state hasn’t been acted on and it’s not expected to be any time soon. Is all of this Bill de Blasio’s fault? He didn’t create the virus and cities all over are struggling. But he’s the one who wanted this job and the burden falls on his shoulders to find a solution.

There’s an old saying about how a smooth sea never made a skilled sailor. Bill de Blasio is sailing through the worst storm of his time in office. We’ll see whether or not he can bring this thing safely back to port.