POLL: Majority Of Americans Who Have Seen Anti-Police Violence In Their Community Are Turning To Trump 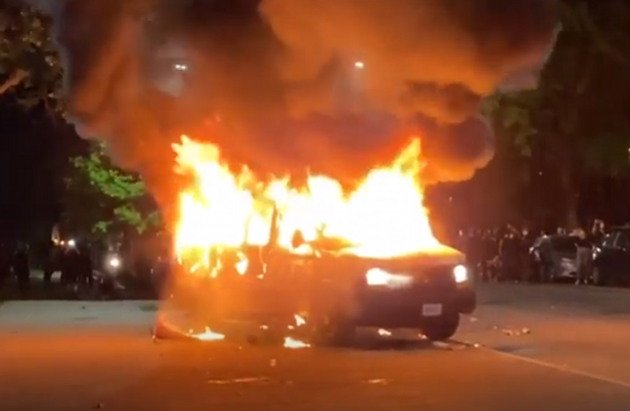 For some bizarre reason, Democrats seemed to think that the anti-police violence and riots America suffered through over the summer would help them politically.

How else can anyone explain the fact that they failed to address it at their national convention?

It was only when their poll numbers started to sink that they began to talk about it and even then, they tried to blame it all on Trump.

Now it is really backfiring on them in the polls.

Three-out-of-four voters who’ve had violent anti-police protests in their community rate those protests important to their vote in the presidential election. Among these voters, a sizable majority like the job President Trump is doing.

The latest Rasmussen Reports national telephone and online survey finds that 42% of Likely U.S. Voters have had anti-police protests in their community this summer…

Nearly half (48%) of these voters say the protests in their community have turned violent.

Among all voters, 65% say the violent protests are important to their vote in the presidential election this fall, with 41% who say it’s Very Important.

Among those who have had violent protests in their community, even more (76%) rate them important to their vote, including 54% who say they are Very Important. Sixty-three percent (63%) of these voters Strongly Approve of the job Trump is doing versus 35% who Strongly Disapprove.

This is going to hurt Democrats and help Trump in November.

Oh boy. Sounds like the Dem’s plan backfired. Where has most of the violence occurred? Urban areas, which are usually a hotbed of Dem voters.

Why did Democrats think this would help them win over voters?