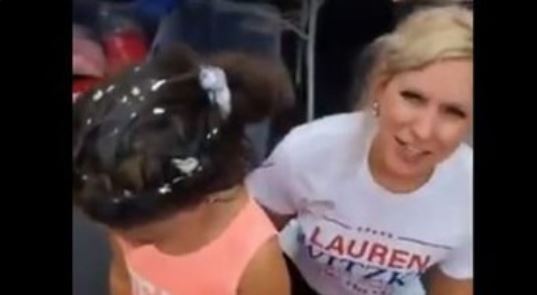 No, it’s not Portland…

Out in Joe Biden’s home state of Delaware, small children seem to be special targets for assault.

The picture depicted is that of a sweet little girl with a splatter of eggs and egg shells all through her hair. She was the biggest victim of a scrum of screaming Democrats who approached a group of small children attending a Lauren Witzke for Senate rally in Delaware, and then hurled eggs at the little ones. According to Red State:

Witzke explained that leftists drove by in a car and began throwing eggs at her. While other kids apparently also got hit, this little girl was hit the worst. The candidate explained that the girl wasn’t doing anything but standing there when the attack happened.

Children. As targets. For assaults with flying projectiles, such as hard-shelled eggs, with messy interiors.

What kind of a sorry excuse for a human would enact that kind of assault on a small child in a bid to get people to vote for Joe Biden? Only the most depraved of minds, nobody assaults a kid. As Red State notes, some kind of ‘uncrossable line’ has been crossed now that children can be targets.

And shockingly, it’s not the first time in Delaware, either. Less than three weeks ago, the same sort of Democrats launched an assault on a seven year old boy, stealing his prized MAGA hat as the child cried and begged for them to return it, sadistically walking away with the hat and then flinging it into a fenced rail yard where the child could not retrieve it. The pair of assailants also stomped on the child’s hand and made him cry.

They’ve since been charged with hate crimes, including inappropriate touching, since they were caught on video.

No such luck for the little girl covered in eggs and undoubtedly traumatized because of the incident.

Apparently, there’s no free speech in this country, and going to a rally is now hazard to one’s heath. The left has also assaulted old people exiting the GOP convention, such as these.

Seems they have a special attraction to attacking the most helpless. You’ll never see them target the beefy young men, they go for the old and the children in considerable numbers. According to this report in the Washington Times, they’ve stepped up their violent attacks against Republicans as election day approaches, and noted a long series of specific incidents:

While no one tracks exact statistics of political violence, a Washington Times review of reported incidents uncovered at least 15 major skirmishes since February. The number is likely greater, however, since so many incidents are unreported.

“The hard left is certainly getting more active,” said Brian Levin, director of the Center for the Study of Hate & Extremism at California State University, San Bernadino. “We had the first homicide from the far left in many, many years this year.”

Incredibly, neither Joe Biden nor Kamala Harris, nor any Democrat, has said a thing about these thugs in the ranks, doing their attacks and assaults in the name of voting for Joe Biden.

The egg attacks on the innocent are particularly poignant, to me at least, because I remember the egg attacks on innocent and fun Trump supporters in 2016 in San Jose, California, way back then, and was so outraged by them I began to open my mind to voting for Trump.

Something like that might happen multifold now that the targets are children, and Camp Biden has continued to say nothing  — even with the crimes happening right under their noses in their own district.  Because with the left sliding into rank terror against the helpless and attempting to subvert the political process itself, the voters can’t help but take notice. This may just backfire badly on them.