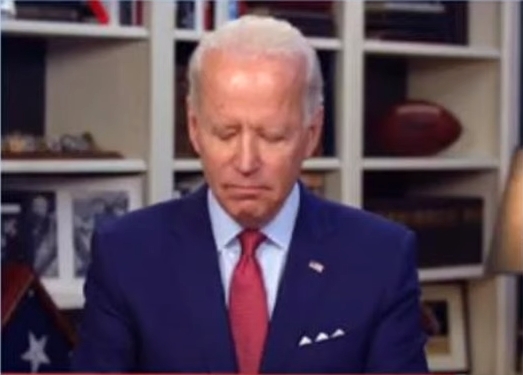 By now, it’s the worst kept secret in the world that Joe Biden is having cognitive difficulties. He’s tethered to a teleprompter, fed only pre-approved questions, and speaks in short increments to friendly audiences. Rumors are floating about that his dementia is quite advanced. Rush Limbaugh came up with a theory that suggests that those rumors are correct.

On Sunday, Thomas Lifson reprinted a post that’s been circulating on the internet. It purports to come from a former Biden staffer who quit the campaign and cannot keep quiet about Biden’s mental incompetence. Briefly, it says that Biden has advanced dementia and that the medicine he takes for it causes incontinence. Although the post accurately describes Biden’s behavior and his brief appearances, an anonymous author means it has dubious utility.

Rush Limbaugh, however, has noticed another piece in the puzzle, and this one yields to empirical evidence rather than first-hand knowledge. This is the fact that, other than the long-ago Democrat debates and his acceptance speech (which may have been live, rather than prerecorded), Biden is never seen at night. In that regard, he is the “un-vampire.”

Indeed, most of Biden’s appearances are early in the day. He may do this because he tires easily and, by afternoon, is running on empty. Rush, though, posits that Biden may be suffering from sundowning, something strongly associated with dementia in the elderly, especially with Alzheimer’s. Sundowning is so named because it consistently appears as the sun is setting.

I’ve seen this first-hand with both my parents, neither of whom had Alzheimer’s, but both of whom sundowned badly as they developed age-related dementia. What I learned was that, for the people sundowning, the illusions are real. These are not nightmares from which they can awaken. You cannot “snap” them out of it. They cannot be perked up and trotted out with a little medicine. While sufferers are sundowning, they’re gone.

And that gets us to Rush (h/t Ace of Spades):

People with dementia often, not always, but often get more confused and nervous in the late afternoon and the evening. If you have had someone in your family suffer from dementia or Parkinson’s — not Parkinson’s, but Alzheimer’s to one degree or another, you probably have seen this.

You’d have an average day where you would think, “Hey, grandma doing great today. Grandma’s really cool today.” And families are filled with hope when those days happen, and then on those same days, when you get to sundown and later, the deterioration picks up, and you can see it, and you get depressed because earlier in the day you thought, “Okay. This is gonna be a good day.”

I have heard Jill Biden say that her husband Joe was up early every morning on the phone with all sorts of people. And she says this as a way, “Hey, don’t believe this stuff about Joe having mental problems. He’s up, he’s up every morning early, he’s talking to countless people on the phone.” That’s not the time to look. You need to look at Joe Biden at sunset.

I’ve been looking at this. I can’t recall when Biden is out in public at night, save for the Democrat debates which were way earlier this year. You gotta go back to January, February, March, and even then there weren’t very many. But of recent campaign appearances, I can’t recall, I can’t remember Biden out in public at night. And certainly not after a full day of negotiating world peace and having a helicopter ride to the hangar, two-hour speech and banter with 15,000 people and then going out and doing a debate. I haven’t seen Biden engage in that kind of rigorous schedule.

Biden’s not all there, and we all know it. It’s an absolute scandal that the Democrats are trying to prop him up long enough to get him through the election so that Kamala Harris, a leftist’s leftist, can be installed in the White House.