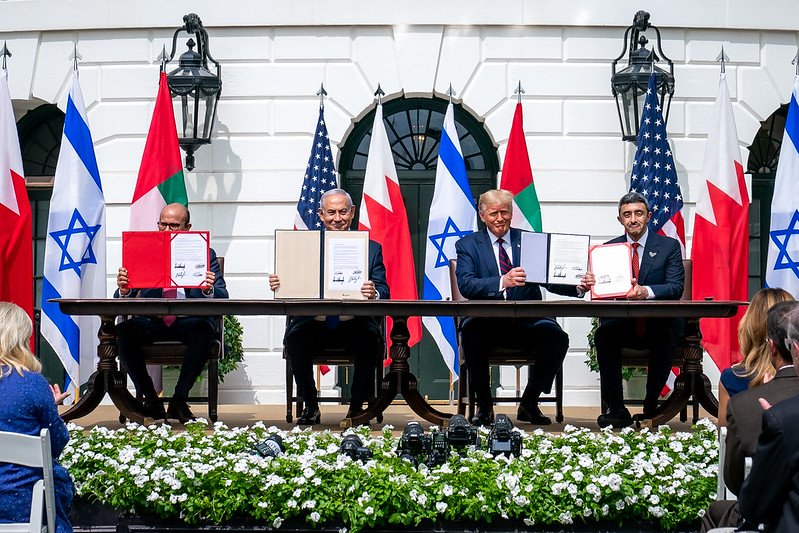 President Trump declared that there would be “peace in the Middle East” after he facilitated the official signing of two historic peace deals between Israel and two other nations on Tuesday. The signing of The Abraham Accords, which occurred on the White House South Lawn, ushered in the formal agreements between Israel and the United Arab Emirates, and Israel and Bahrain to establish diplomatic relations.

“We’re here to change the course of history,” Trump said. “After decades of division and conflict, we mark the dawn of a new Middle East.”

“We’re here to change the course of history,” declared Pres Trump, speaking from the first floor balcony of the WH overlooking the South Lawn signing ceremony. Said these are the first two such peace agreements in a quarter century and there’ll be more to come. pic.twitter.com/Ug7XLqhTZR

Israeli Prime Minister Benjamin Netanyahu and foreign ministers from the United Arab Emirates and the Kingdom of Bahrain signed the official documents decreeing the normalization of relations between the nations.

Pres Trump, PM of Israel, and the Foreign Ministers of Bahrain and the UAE, sign documents for normalization of relations, the first between Israel and two Arab states in a quarter century. pic.twitter.com/ZpQKzQygna

Leaders end the signing ceremony waving to invited guests on the South Lawn from the WH balcony. pic.twitter.com/gdeZGKfdHS

According to the president, the nations will “establish embassies, exchange ambassadors, and begin to work together as partners.”

“They’re going to work together. They are friends,” Trump said. “There will be other countries very, very soon that will follow these great leaders.”

Israel, the United Arab Emirates, and Bahrain will establish embassies, exchange ambassadors, and begin to work together as partners.

Under the peace deals, the nations will be establishing diplomatic relations and different policies to ensure freer travel and religion in the regions.

“Thanks to the great courage of the leaders of these three countries, we take a major stride toward a future in which people of all faiths and backgrounds live together in peace and prosperity,” Trump said.

Before the ceremony, Netanyahu joined Trump in the Oval Office where he was awarded “a special token of affection,” a key to the White House. Netanyahu thanked Trump saying that he “has a key to the hearts of the people of Isreal. He also praised Trump for assisting in giving the Middle East peace.

“This is unimaginable a few years ago. But with resolve, determination [and] a fresh look at the way peace is done, this is being achieved,” Netanyahu said, praising the Trump administration for their assistance in brokering the deals.

PM Netanyahu receives a “Key to the White House” from Pres Trump. He calls it “a special token of affection” for Netanyahu, who responded by telling Trump he has “a key to the hearts of the people of Israel,” for all he’s done. pic.twitter.com/W20rxxaBOw

Trump also signaled that brokering more peace deals in the Middle East is a priority for him, claiming that Saudi Arabia might be the next.

Now Pres Trump says he expects 7, 8, or 9 additional countries to agree to normalization of relations with Israel. Just a few hours earlier, he put the number at 5, 6, or 7. Before leaving WH for a Town Hall in Philadelphia, he said he thinks Saudi Arabia will be one of them.

White House advisor and Trump’s son-in-law Jared Kushner praised the decision that he helped orchestrate on CNN Tuesday evening, saying that none of it would be possible if Trump had stuck to the DC narrative.

“The diplomacy I’ve done over the last years, obviously it’s been untraditional. We’ve taken some criticism for doing it that way, but we’ve kept our cards very close to our vest, and it’s produced results,” he said.

“A lot of the people who criticize the approach that we took on this deal are the same people who said that if Trump was elected, we’d be in World War III and quite frankly that hasn’t worked,” Kushner continued.

Others pointed out that this strategy, while far-fetched to some on the Hill, proved to be successful.

There’s a simple foreign policy lesson here: reward your friends and punish your enemies, because then you’ll have more friends and fewer enemies. Trump understood this intuitively, and had the guts to ignore basically the entire DC foreign policy establishment to pursue it. 9/