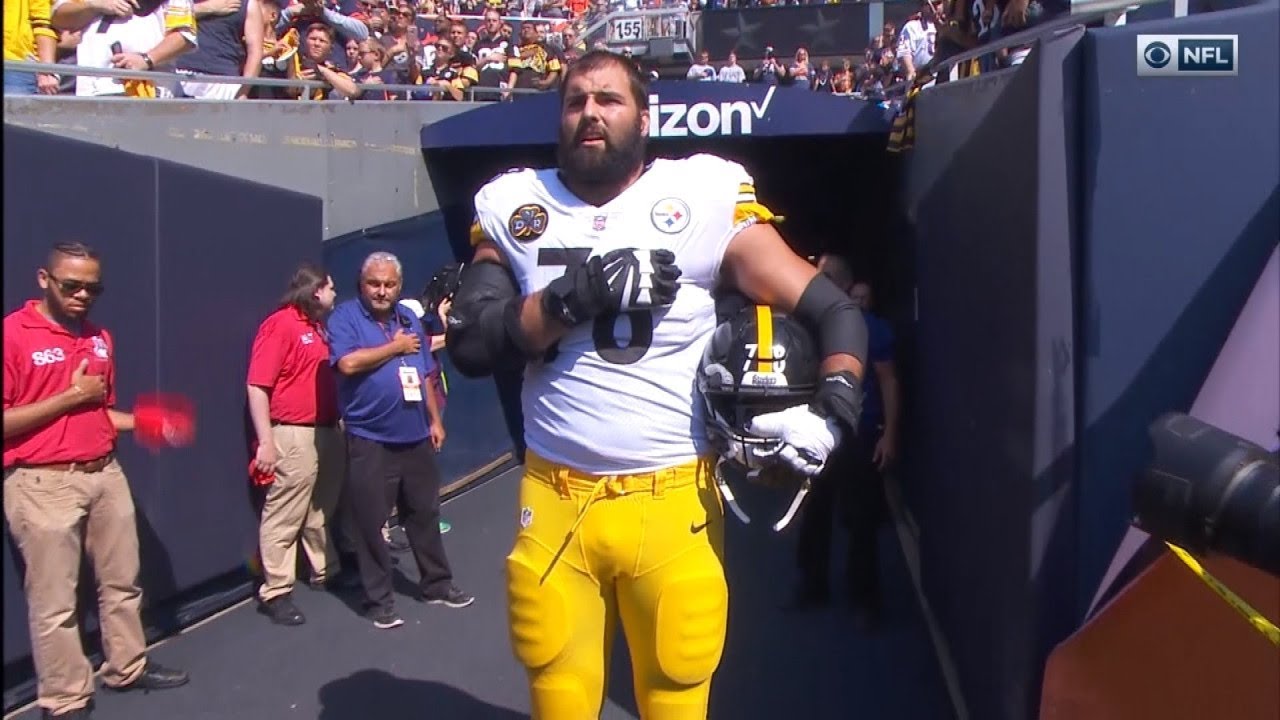 Alejandro Villanueva plays for the Pittsburgh Steelers. He is a military combat veteran, having served in Afghanistan.

Cashe, a black man, was a U.S. Army sergeant. He died of injuries suffered in Iraq in 2005.

Rose, also black, was a criminal. He was part of a group that committed a drive-by shooting in the Pittsburgh area, and likely was the shooter.

The police stopped the group’s car which, they observed, had bullet holes in the side. The officers ordered the driver to get out of the car. As they were handcuffing the driver, Rose and another accomplice left the car and ran away. An officer shot at, and killed, Rose. At the time of his death, Rose had gun powder residue on his hand. However, Rose was unarmed when he was shot.

Rose had participated in at least one other drive-by shooting. Video footage showed him in the front passenger seat of a car while another man, the guy who was running away with Rose when Rose was later killed, fired at a man through the rear window.

The officer who killed Rose was tried for criminal homicide. A jury acquitted the officer. Three African-Americans were on that jury.

It’s shocking that the Pittsburgh Steelers want to honor a guy who participated in at least two drive-by shootings and was likely the shooter in one of them. How anyone could root for a team with such players is beyond me.

Couldn’t the players have picked another “victim” of “racial injustice” to honor? Maybe not. It seems that Rose was the first person killed by the East Pittsburgh Police Department since at least 2015 and that no more deserving victim has come along since Rose’s death in 2018.

I guess “systemic police racism” isn’t all it’s cracked up to be. Not in Pittsburgh, anyway.

It’s not just the Steelers’ players who are to blame for honoring a two-time drive-by shooting participant. According to this report, the NFL has said that only pre-approved names can appear on helmets this year, and that the approved names list will consist only of victims of “racial injustice.”

I take this to mean that Rose’s name is (or soon will be) on the NFL pre-approved list.

Will the NFL allow Villanova to wear Caste’s name on his helmet anyway? We’ll see. At least his coach, Mike Tomlin (also black), reportedly is supporting the patriotic player.

Readers may recall that Villanova bucked the team once before. In 2017, Tomlin told the entire team to stay in the locker room for the national anthem. Villanueva left the locker room, stood, and saluted.

Villanova’s decision not to a wear Cashe’s name on his helmet drew criticism from Rose’s mother. She complained:

The Pittsburgh Steelers took a team vote. Obviously one person didn’t like the results so they chose to do something different. I have nothing against vets and absolutely appreciate everything that they have done and continue to do for us. But this one person showed us exactly who he is and obviously he didn’t approve of how the vote turned out.

I agree that Alejandro Villanueva is showing “exactly who he is,” and I salute him.