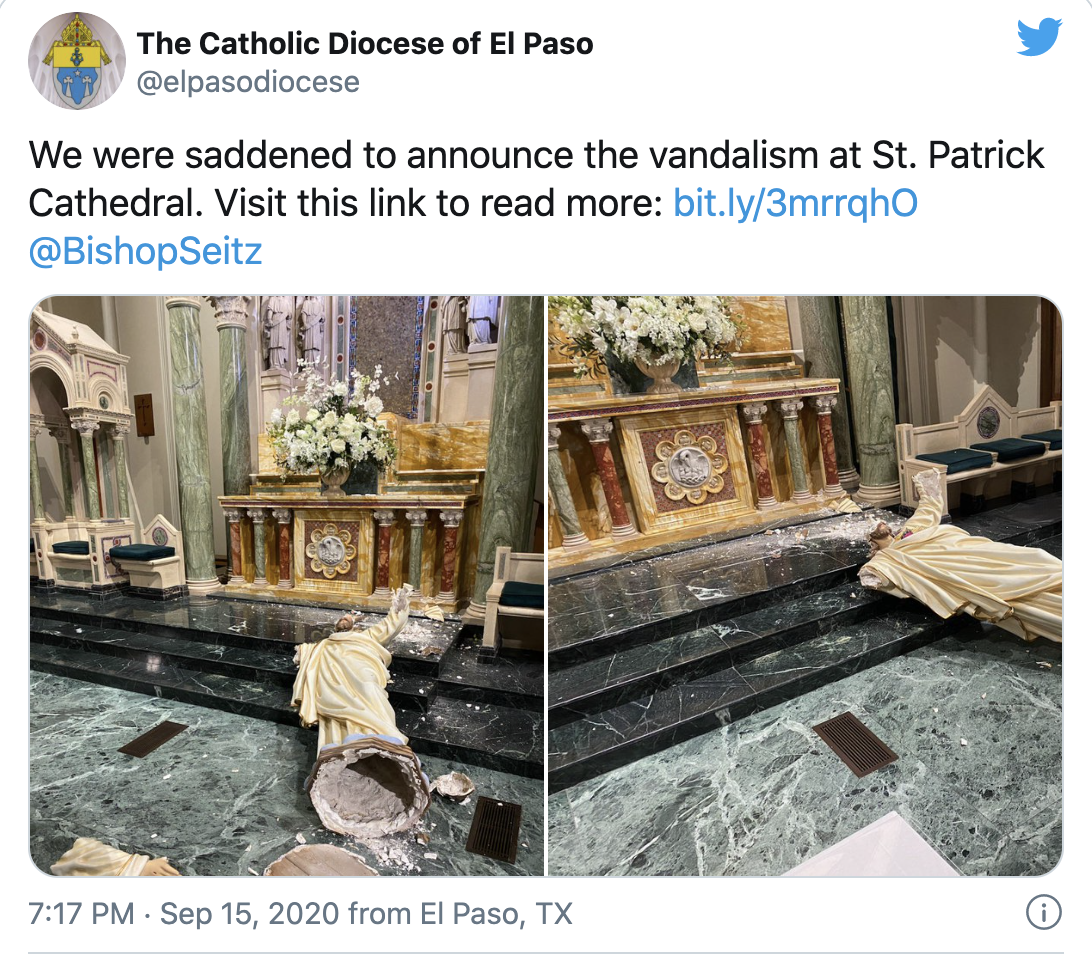 An almost 90-year-old religious statue was destroyed in an El Paso, Texas cathedral on Tuesday, making it one of approximately 200 historical and religious statues vandalized over the last six months.

“I am in shock and we at the Cathedral are heartbroken over such an unexpected situation,” said the rector of St. Patrick Cathedral, Fr. Trini Fuentes.

“I am devastated at this irreplaceable loss as I know members of this parish community and the whole Church of El Paso will be. In this moment we will reach out in confidence to the One this statue represented and I know he will console us,” Bishop Mark J. Seitz added.

We were saddened to announce the vandalism at St. Patrick Cathedral. Visit this link to read more: https://t.co/6x3oGkimH1 @BishopSeitz pic.twitter.com/Dg8lALkzaZ

According to the Catholic Diocese of El Paso, the Sacred Heart of Jesus statue behind the altar was decapitated by a suspect who entered St. Patrick Cathedral during open prayer hours around 10 a.m.

“This statue is one of my favorite representations of Jesus—his arms open wide in welcome, his heart aflame with love for us. I would often take inspiration from this image as I prepared for Mass,” Seitz remarked.

Police are investigating the incident and questioning one detained suspect. While Seitz says that there is no further information at this time, he will be praying for the “greatly disturbed” suspect who committed the crime.

“At this point we do not know anything about the person who carried out this assault, but he certainly must be a person who is greatly disturbed to have attacked this peaceful place in our city and this image of the King of Peace,” Seitz said. “I hope this might be the impetus for him to receive the help he needs. He will be in my prayers.”

While the bishop says he is disappointed that this incident occurred, he is thankful that no one was hurt.

“As sad as I am to see a statue attacked and destroyed, I am grateful that it was not a living person,” Seitz said. “But a statue, particularly this statue, concretizes and connects us to persons and ideals that are not visible to our eyes. They reveal to us realities that are close to us, but unseen.”

The Diocese asked for the intercession of St. Patrick, patron of Ireland and of their Diocese.