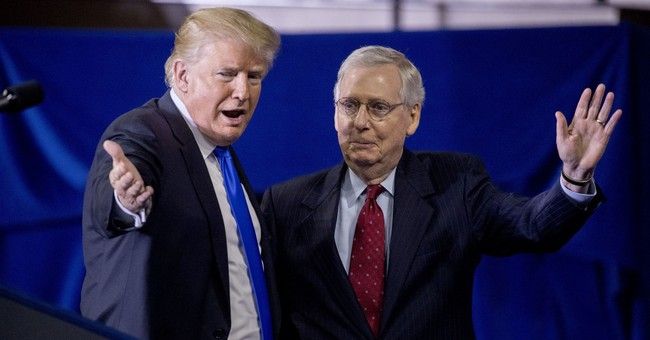 Best idea he’s had in months, one which I suggested myself in this post last week.

In fact, if he successfully twisted Senate Republican arms on this, I’d argue that that alone would do him more good in November than pretty much the entirety of his “law and order” bellowing this past summer.

Which raises a question: Why did it take him until mid-September to send this tweet? They’ve been mulling over a new COVID economic relief package since June.

Democrats are “heartless”. They don’t want to give STIMULUS PAYMENTS to people who desperately need the money, and whose fault it was NOT that the plague came in from China. Go for the much higher numbers, Republicans, it all comes back to the USA anyway (one way or another!).

It’s the House Democratic bill, not the “skinny” Senate Republican alternative, that provided a new round of $1,200 stimulus payments for taxpayers, but oh well. Senate Republicans responded to his tweet with feigned fiscal-conservative resolve, which makes me laugh:

“If the number gets too high, anything that got passed in the Senate will be passed mostly with Democrat votes and a handful of Republicans so it’s gonna have to stay within a realistic range if we want to maximize, optimize the number of Republican senators that will vote for it,” Thune said…

“I think that was a marker that was put out there,” said Sen. Mike Braun (R-Ind.). “I think politically the president still benefits from maybe asking for more but I think that was pretty clear that that was voted upon by 52 senators … you’d lose a bunch of fiscal conservatives if you did anything other than what we voted on for last week.” Sen. Rand Paul (R-Ky.) was the only Republican in the caucus to vote against advancing the measure.

“We did the right thing,” added. Sen. Ron Johnson (R-Wis.). “The president has his opinion, we have ours.”

Trump should call their bluffs. Senate Republicans understand the potential stakes here but the president could crystallize it for them with a single tweet. “If I lose this fall because Republicans in the Senate refused to go big on a stimulus, every one of them who voted no will be responsible! Or do they secretly want Sleepy Joe to win?” Cruz, Hawley, Cotton and all the other 2024 hopefuls repositioning themselves as deficit hawks under Biden will tremble when faced with that charge.

Trump doesn’t even need them, though. All he needs is 13 Republicans to join with Schumer on the Democratic plan, or something in the same ballpark, to get this done. If he can’t command the loyalty of a dozen or so Republicans when his own election is on the line, then he’s washed up. He might as well resign.

Joshua Green wrote this morning that President Trump has forgotten an important lesson that Candidate Trump understood, namely that most of the GOP base doesn’t give a wet fart about fiscal conservatism except when it can be used as a cudgel against Democrats. He also knew that Paul-Ryan-style attempts at entitlement reform were political losers in a general election, however important they might be as a basic budgetary matter. Candidate Trump would have been howling at Senate Republicans to go big on a COVID stimulus from the start of this summer’s negotiations. It’s very much in his own electoral interest to do so now, argues Green:

Larry Bartels, a Vanderbilt University political scientist who studies the economy’s effect on elections, says changes in people’s personal income, even more than the overall state of the economy, are what will shape their impression of Trump. He and Princeton University professor Christopher Achen “found a strong relationship between changes in real disposable income per capita in the second and third quarters of presidential election years and the incumbent party’s electoral fortunes,” Bartels told me. That window is closing fast.

“What in the world is Trump thinking?” asked Derek Thompson in a piece for the Atlantic, wondering why the president had been so passive (until this morning) about demanding more stimulus. “I don’t ask the question rhetorically. I desperately want to know, as I cannot imagine why an incumbent president, without any ideological commitment to government restraint, facing imminent judgment over the struggling economy, would lose interest in stimulating it.” Trump’s pre-pandemic economic record is his strongest credential against Biden, probably the one thing keeping him in the race right now. And he’s been losing ground on it lately in head-to-head polling, with many surveys showing the candidates nearly tied or Trump’s lead down to single digits. The evidence that rioting might scare voters into giving him a second term is thin and getting thinner by the day. He should have been all-in on a new stimulus months ago.

Thompson’s best guess at an explanation for Trump’s passivity is that POTUS is operating in a bubble of magical thinking, as he tends to do. Just as he believes he can convince Americans that things are getting better on COVID by simply repeating that claim ad nauseam, he probably believes — or used to believe, until this morning — that he could convince them the economy is soaring by doing the same thing. “Trump is unwilling to advocate for stimulus,” Thompson posits, “because he doesn’t want to acknowledge that the economy is broken in the first place.” Combine that with the vast array of economic advisors and congressional Republicans around him who still subscribe to zombie-Reaganist policies about shrinking government and you have a lethal combination, a team that’s convinced itself that more stimulus will discourage recovery and a president who’s forever too credulous when people tell him that things are on the right track.

Benjy Sarlin offers a few more theories for why Trump has been reluctant to make a deal thus far:

If I had to guess, two Trump-specific issues:

1) Sees all negotiations as zero-sum, doesn’t like idea of handing Nancy Pelosi an implicit victory

2) From the start, has blamed economic losses on health restrictions rather than the virus, aid is disincentive to get rid of them https://t.co/PNrL6LF4ga

I guess a third factor would be: Trump does not follow policy details closely himself, but tends to empower conservatives who mesh with him on a personal level and are very skeptical of fiscal stimulus. This neutralizes his own personal willingness to do deficit spending.

Yeah, it may be as simple as the fact that, with rare exceptions like tariffs, Trump doesn’t do policy. Trump simply trusts the people around him to look out for his best interests, which helps explain how the most populist Republican president in ages ended up with a huge tax cut that mostly benefited the rich as the major domestic achievement of his first term. He trusted McConnell and Ryan on that, and McConnell and Ryan went full zombie-Reagan. He seems to now be realizing, however belatedly, that he has to be more assertive about a COVID stimulus. I think Senate Republicans are betting that they can politely ignore this morning’s tweet in the belief that Trump has a political attention span of about three seconds and won’t continue to hound them about this. Are they right? His reelection may depend on the answer.