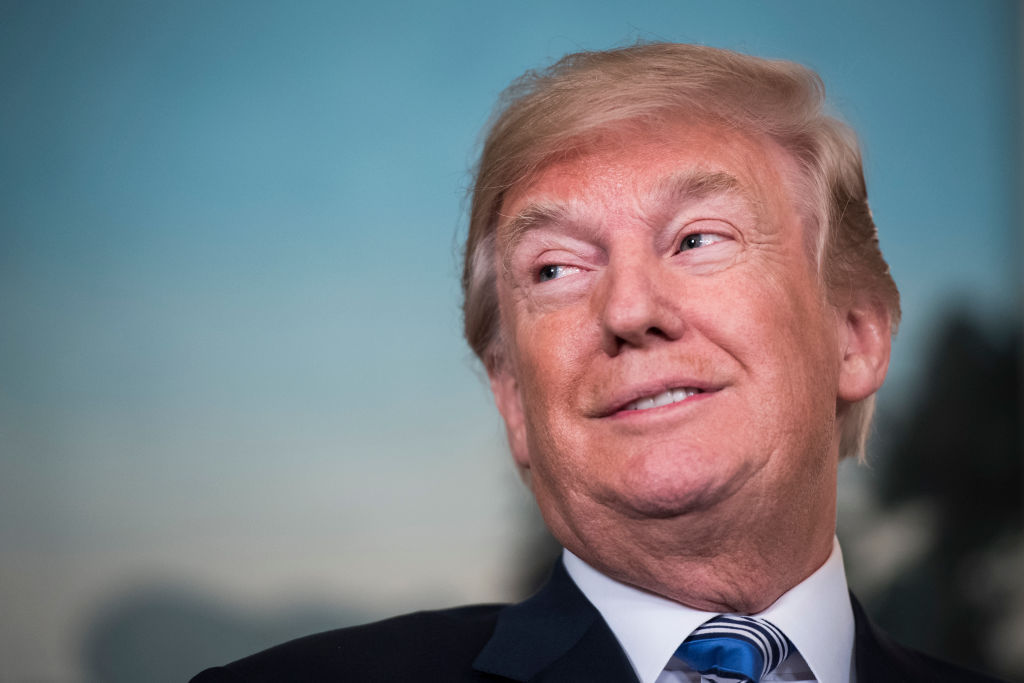 “I had him all set. Mattis didn’t want to do it,” President Donald Trump told Fox News this week. Back in the day, the president explained, he would have rather “taken him out,” but relented to the warnings of Secretary of Defense James Mattis.

I could “have lived either way with that,” Trump said of Syrian strongman Bashar al-Assad. “You know I considered him certainly not a good person, but I had a shot to take him out if I wanted to, and Mattis was against it. … Mattis was against most of that stuff.” For those plugged-in on the convulsions of the Trump presidency and this administration’s foreign policy, it was a truly shocking remark, even for a White House that’s long lost its capacity to astonish. For the uninitiated just starting to pay attention, it must have been truly bewildering stuff, as Trump’s re-election campaign has in recent weeks beat the drum with a counterclaim: Trump is anti-war.

In August, an ad was cut for a Republican presidential candidate with the phrase “make peace, not war.” Old favorites like Rand Paul told the Republican National Convention in August that Trump was the first president in a generation “to seek to end war rather than start one.” And traditional hawks, perhaps sensing which way the wind is blowing, even got in on the act. “A lot’s changed in four years,” Tom Cotton told the convention. “No one who has seen the face of war desires to see it again. … Too many of our fellow Americans are already honored at the hallowed grounds of Arlington.”

But now Trump’s back is against the wall, especially on national security. And his flippant remark about Assad does little to assuage concerns that he is just not a steady hand.

Twin revelations — first, Jeffrey Goldberg’s recent reporting that Trump denigrated military service in shocking terms, and second, Bob Woodward’s recent reporting that Trump intentionally downplayed the Coronavirus threat in an effort to stave off panic — have damaged the president politically. Keeping Americans safe is the cardinal duty of the president. This is true, even if you’re uncomfortable with Mr. Goldberg’s murky-at-best record on Iraq, or have noticed that Mr. Woodward always seems to be licking his chops to oust Republican presidents. The effect is the same: none of this is helping Trump.

But until the Fox interview, Trump had been responding to his latest bad news cycle in an interesting way. He was telling the truth.

“I’m not saying the military is in love with me,” Trump said. “The soldiers are. The top people in the Pentagon probably aren’t because they want to do nothing but fight wars so that all of those wonderful companies that make the bombs, that make the planes and everything else, stay happy.” Combined with the “make peace, not war” ad, it seemed another way the last Boomer president, in his own way, tipped his hat to his generation’s hippie roots. “The figure most associated with this kind of thinking is Noam Chomsky, the famous linguist who emerged during the Vietnam War as an anti-war prophet,” said neoconservative reporter Eli Lake this week on Trump’s remark.

But the Assad comment truly poured cold water on the idea of Trump the peacenik. And on Syria, at least, the comment throws into serious doubt the idea of Trump the realist. This is all the more astonishing — because, think what you will about Trump  — few others in American politics have been willing to point out what is commonplace knowledge in the rest of the globe: the world is complicated, and it is clear that America does not always help. The late Obama years were dominated by a will-we-or-won’t-we oscillation on action on Syria, in particular. President Obama, supported by his most significant chief of staff (Dennis McDonough), eventually passed on more robust action to oust Assad, after flirting with war. But the duo was a minority in its own administration, with even Secretary of State John Kerry signing on to dissent cables critical of America’s alleged heartlessness.

Far more than Obama, Trump brought to the 2016 campaign trail a more overt enunciation of why America should stay out. The reporting on the vast crimes of Mr. Assad’s government was acknowledged. “I don’t like Assad at all,” Trump said in the campaign. But Trump promised to bring a tough-minded mentality to the region, one that belied a reasoned understanding of what nasty actors like Iran and Russia were up to. “Assad is killing ISIS. Russia is killing ISIS and Iran is killing ISIS,” Trump said. Trump reported on what Assad had become: a gangster with serious blood on his hands, but also a protector of religious minorities, and in a country where Islamic State and al-Qaeda are serious minority parties, Trump had the termity to suggest maybe it was best for America to take a pass. With all his caterwauling about Iraq, Trump’s memory of the last time the United States knocked off a mustachioed Ba’athist seemed searing.

But Trump’s flippant remark about killing Assad would seem the coup de grace of four years of incoherent Syria policy. Trump attacked Assad twice, in the springs of 2017 and 2018, after likely chemical weapons use by the regime. In 2018, specifically, Trump considered an expansive assault on the government in Damascus, championed by newly-installed national security advisor John Bolton. At Mattis’ urging, Trump went with a smaller airstike, but not before apparently considering an outright assassination of Assad, despite strenuous previous denials.  “I heard somewhere where they said the assassination of President Assad by the United States. Never even discussed,” Trump said in 2018, apparently lying.

But Trump’s Syria policy continued to be all over the map. A spat with Mattis forced the military man’s ouster in late 2018. The conflict? Trump wanted to pull all U.S. troops out of Syria. Then, it was Mattis the hawk, Trump the restrainer. But almost two years on, American forces are still in the country, and Trump’s pointman on the conflict is Washington foriegn policy grandee — and former NeverTrumper — Jim Jeffrey. Jeffrey said this year that the U.S. remains in the country to counteract Assad’s booster, Iran, which Trump previously touted for its role in annihilating ISIS.

The main counterpoint to any frustration with Trump’s foreign policy is one defense: the so-called “madman theory.” Cribbed from the Richard Nixon White House, it holds there is nuanced continuity in Trump’s approach. Trump threatens “fire and fury” on North Korea, before sitting down for a deal. He punishes Assad, before laying the groundwork to leave the country. And to hear some Iran hawks, he assassinates senior Iranian officials like Qasem Soleimani, in order to increase his leverage at a future bargaining table. But there is another theory: Trump is simply playing with fire, and has grown enamored with the awesome power over life and death. The Soleimani strike, in particular, remains concerning. The fact that (so far) such a daring moving has been met with minimal reprisal — combined with comments on Assad to Fox — indicate that Trump could just be getting used to assassination as a staple of statecraft.

The journal Responsible Statecraft argues that Mike Pompeo, the hawkish secretary of state, could be pushing for an October surprise. The problem with the “madman theory” and the Nixon years is that Nixon is now generally seen as needlessly prolonging the war. Nixon, of course, was also prematurely ejected from Washington, a potentiality that no doubt now weighs heavily on Trump’s mind. The worry for the Trump campaign is that all this “nuance” is lost on the voter.