Former top Pence aide on COVID flips to Biden: I can’t support Trump given his disregard for human life 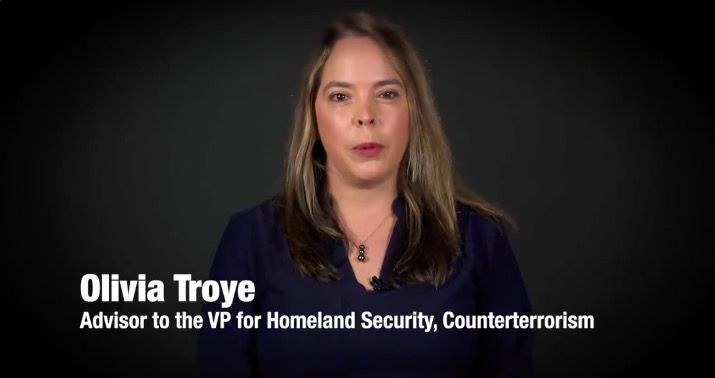 Probably the closest we’re going to get to a “Lonesome” Rhodes moment from Trump is her claiming in the clip at the end of this post that he once said the pandemic might at least spare him from having to shake the hands of “disgusting” people.

Olivia Troye worked for Pence for two years on counterterrorism, then shifted over to the coronavirus task force when he took charge and helped him plan and prepare for the daily meetings, including writing and editing his comments, according to an interview she gave to WaPo. In keeping with that, she claims she co-wrote his now infamous op-ed in the Wall Street Journal insisting there was no COVID “second wave,” which was published in June right around the time that a second wave started breaking across the Sun Belt and California. The piece was “ludicrous,” she now admits.

Asked about her turning on Trump, White House staff resorted to the same playbook they’ve used for the many, many, many other Trump alumni, senior and otherwise, who’ve walked away from their experiences believing that the president is unfit for office. She’s “disgruntled.”

White House deputy press secretary Judd Deere said, “Outside of generally watching the White House Coronavirus Taskforce from the overflow staff room, this disgruntled former detailee was never in private meetings with the President and her assertions have no basis in reality and are flat out inaccurate.”

“Ms. Troye directly reported to me, and never once during her detail did she every express any concern regarding the Administration’s response to the Coronavirus to anyone in her chain of command,” Kellogg said.

Pence joined the refrain even though Troye told WaPo, “I still have a lot of respect for the vice president. I worked very loyally for him to do everything I could for him. I don’t want this to become a speaking-out-against-him thing.” He has his eye on 2024; if preserving his chances in that primary means knifing Troye, oh well.

The Vice President just responded about his former homeland security adviser. Olivia Troye, who is now supporting Biden. Pence describes her as “one more disgruntled employee who’s left the WH decided to play politics during an election year…”

It’s weird that her supposed disgruntlement doesn’t extend to her own former boss, the VP. Anyway, in every White House there are big egos, they collide frequently, and most of their pet ideas end up being rejected by the president, but only one administration recently has seen so many staffers leave “disgruntled” that they now have the numbers to staff an entire organization designed to move the party away from him. That would be REPAIR, which launched today and counts a bunch of Trump ex-staffers, including Troye, among its advisors. Also among them is Betsy DeVos’s former chief of staff, the newest member of the “disgruntled” club.

Maybe they’re disgruntled because they’ve concluded from first-hand observation that Trump and the people around him are unfit for office?

Senior aides to Pence held a contemptuous view of the administration’s scientists and tried to project a far too rosy outlook about the virus with cherry-picked data — and key public health agencies including the CDC were marginalized throughout her tenure, Troye said. Advisers were afraid to express positions contrary to the president’s views because they feared a public denunciation or “that they would be cut out,” she said…

Trump rarely attended task force meetings and was briefed only on top-level discussions by Pence or the government’s public health officials. When Trump attended one meeting, Troye said, he spoke for 45 minutes about how poorly he was being treated by certain personalities on Fox News.

“He spent more time about who was going to call Fox and yell at them to set them straight than he did on the virus,” she said.

The most interesting part of the WaPo piece comes not from Troye but from independent reporting claiming that James Mattis, John Kelly, Rex Tillerson, Gary Cohn, and Kirstjen Nielsen have all been critical of Trump privately, with Kelly reportedly describing Trump as “a narcissist who does not understand the military, cares only about his political fortunes and is unqualified to be president,” per sources. Are they about to come out of the woodwork publicly? Another former senior official who’s in the mix is Dan Coats, who supposedly once said that Trump “doesn’t know the difference between the truth and a lie,” according to Bob Woodward. Coats has an op-ed out today about protecting the integrity of the election that includes this passage, which features no names but whose subject is clear enough:

Our democracy’s enemies, foreign and domestic, want us to concede in advance that our voting systems are faulty or fraudulent; that sinister conspiracies have distorted the political will of the people; that our public discourse has been perverted by the news media and social networks riddled with prejudice, lies and ill will; that judicial institutions, law enforcement and even national security have been twisted, misused and misdirected to create anxiety and conflict, not justice and social peace.

Normally a “disgruntled” staffer might accuse a president of being a fool who should have taken that staffer’s precious advice. The choir of “disgruntled” Trump staffers all sing from a different hymnal: He’s an egomaniac, freakishly callous, a pathological liar, has his priorities out of whack, and doesn’t know what he’s doing.

They must be colluding to have all arrived at the same impression. I mean, what other explanation could there be?

I actually hope Mattis et al. don’t speak out against him before the election, as it’s increasingly depressing to watch people like Troye be dismissed out of hand one after the other even though what they’re saying is frightening and unprecedented. They’re not claiming that Trump’s policies are bad for America, they’re claiming that the country is in danger if he’s reelected. These are people who have served inside the Trump White House and are burning the many professional bridges they’ve made during their careers working for Republicans in order to sound this alarm, and yet they’re waved off with a sniff: “Disgruntled.” One could maybe conceivably justify that if the face Trump presented to the public was different from the private character described by Troye and others like Coats, but it isn’t. Just the opposite. His public persona is *precisely* that of a guy who’d walk into a meeting about a deadly pandemic and rant for an hour about how mean Chris Wallace was to him on the air that day or whatever.

This is who he is. Half the country doesn’t care at all, no matter how many people tell them, “Seriously, he’s even worse behind closed doors.”

The *best*-case scenario for anti-Trumpers in having a barrage of Trump’s own former employees warning people not to vote for him under any circumstances is that it might verrrrrrry slightly move the margins in some key states, which could be relevant if the election’s ultra-tight. But that’s just a fancy way of saying that this country is so broken by partisanship that a harsh consensus judgment on the president rendered by multiple former officials from his own cabinet would likely scarcely matter at all. I think that reality comes through in Troye’s clip here. She’s under no illusions that anyone will heed her warning. She’s doing it for herself, purely as a matter of conscience.

In this new ad @OliviaTroye reveals that during a COVID task force meeting, President Trump said “Maybe this COVID thing is a good thing. I don’t have to shake hands with these disgusting people.”