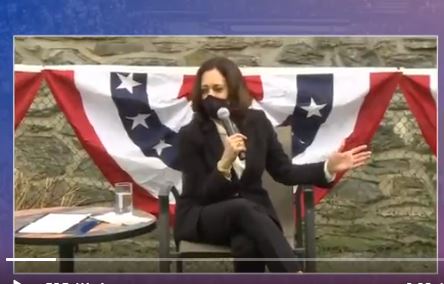 We often talk of Joe Biden’s diminished mental state, characterized by his inability to hold a thought and tendency to fly off the handle in frustration, but has anyone questioned the similar issues of his running mate?

See for yourself if this encounter with Biden’s vice presidential candidate, Kamala Harris, looks normal:

Somebody on her team has got to address the #KamalaCackle. It is such a dealbreaker. pic.twitter.com/AewyLbA3QT

She bursts into a deep, continuous belly laugh on the question of whether children should be going back to school, in two bursts, both inappropriate in their context and unnerving to others as a result.  If you heard someone on the bus doing that, you’d move to another seat.

It’s not the first time she’s done it, either.  Here she was on Stephen Colbert’s show, asked about her harsh scoring of Biden himself at one of the presidential debates:

Strange extended cackling laughter there, too.

It make one wonder if something is just a little off about her.

What does psychology say about people who burst into inappropriate laughter?  According to Wikipedia, what’s called “paradoxical laughter” could be a sign of bipolar, mania, hypomania (where a person is in a manic state but is outwardly normal), or schizophrenia.  We can probably rule out the last item, but she might be a candidate for one of the two formers.  The bipolar spectrum often involves feelings of grandiosity and then deep lows, which wouldn’t be utterly surprising for someone in the political arena.  It also has roots in mood disorders such as depression — and with Kamala’s record of fakery (fake Twitter followers, a curious election that flipped in her favor at the last minute), she might inwardly feel like a fraud.  But most people in politics don’t slide into episodes of manic laughter as she does.

Whatever it is, and perhaps is none of this, it seems to suggest she’s handling the pressure of being a candidate badly.  Nobody does that kind of manic laughter without being thought a little off.  In her case, it’s a particularly disagreeable cackle, which is bound to turn some voters against her even more.

As James Woods points out, it’s strange that her handlers haven’t said anything.  That may well be because she’s famously difficult to work with, based on the leaks that came out during her primary campaign, another sign of potential personality disorders.

Does Harris have a mental health issue she’s not disclosing?  Combined with Joe, whose mental faculties are failing, it’s worth it for voters to know.  Maybe someone should ask her.