The Meaning of an Oath 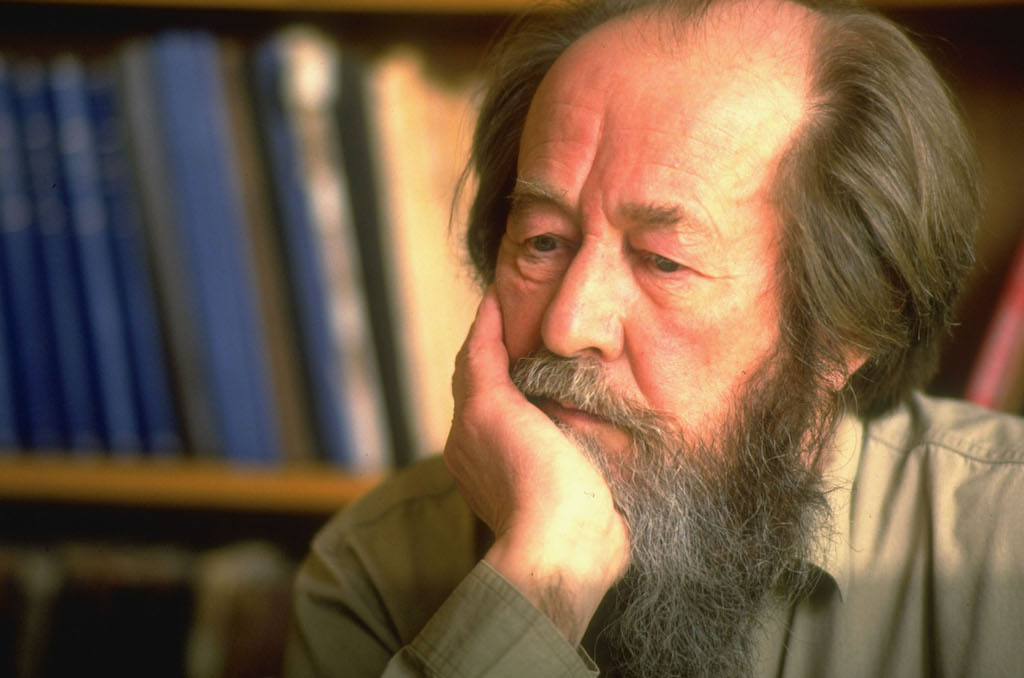 Editor’s Note:Aleksandr Solzhenitsyn and his family lived as “stateless persons” after the stripping of Solzhenitsyn’s Soviet citizenship and his forcible exile to the West in February 1974. Solzhenitsyn was a passionate and self-critical Russian patriot but a deadly enemy of the Communist totalitarianism that lay at the heart of the entire Soviet enterprise. Contrary to legend, he was neither anti-Western (rather, he spoke critically of “the weakness of the West”) nor unappreciative of American virtues: the magnanimity of its people, its impressive capacity for democratic and local self-government, and the ample freedom it gave him and his family. But as this provocative excerpt from Book 2 of his memoir about his years of Western exile (Between Two Millstones) demonstrates, Solzhenitsyn finally could not assent to becoming an American citizen when he had the opportunity to do so in June 1985.

But we were brought low when Alya [Solzhenitsyn’s wife—Ed.] fell ill and remained unwell for two whole years. In April 1986, on the very day of the Chernobyl disaster, she had serious surgery. Thank God, it was successful. But it coincided with agonizing worry about our Russian Social Fund: a crucial bit of its backbone, a key link in the supply chain of our aid sent into the Soviet Union, had been dislodged in the autumn of 1983. In the increasingly terrifying circumstances on the ground, perhaps only Eva [Solzhenitsyn’s “invisible ally” Natalia Stolyarova—Ed.] could have found a replacement—but, less than a year later, our dear Eva died during a failed operation.

Alya would have to patch up, or even perhaps rebuild, the chain of tightrope walkers—and doing so required meetings with the “starting” links in person, rather than by mail, and that meant trips to Europe. She’d already done this in the autumn of 1983—she’d seen Eva in Switzerland (for the last time, as it turned out) and Vilgelmina (“Mishka”) Slavutskaya in Vienna, and the meetings had evidently been noted. Mishka was searched on the train going back, and when they got home there was a noticeable increase in surveillance of them both. Alya was distraught that it was her fault: having no citizenship, she was obliged to request a visa for any trip, and for several weeks the documents would wander around European consulates, from which informers could easily report—and, in that case, all her movements, down to the exact dates, would have been known in advance. For that reason, the already great risk to our selfless volunteers would have increased many times over.

The only solution Alya could see was to take US citizenship, to which we had already been entitled for four years but had never acquired. It would enable rapid, unimpeded travel in the West, without special passports or visas. However, the spotlights were trained on us at the slightest movement, let alone a step like this, and Alya felt that taking citizenship on her own, without me, was unthinkable—it would look like she was making some kind of point. (Just then, at the beginning of 1985, a film attacking the Fund was shown, quite openly now, across the whole of the Soviet Union.) Alya was burning up, insisting the goal was more important than striking a pose, and I could find nothing to contradict her.

And, really, why stand out like a solitary heron in a marsh?

We turned to the Vermont branch of the immigration service. They sent us forms full of little boxes and questions. I couldn’t even be bothered to read them closely—after all, they were rather like the ones we filled in for every visa, in duplicate or triplicate; I never read those either. I gave my secretary, Leonard DiLisio, instructions to fill them all in and, if need be, to come back with questions. And he did, asking for some biographical information about both Alya and me, nothing more, everything was fine. We sent them off. I did know that, as part of the procedure, we would also have to raise a hand to swear an oath of some kind—I’d seen pictures, but I thought nothing of it, a mere formality. They swear on the Bible any time they bear witness.

Some weeks went by—Alya and I were summoned to that same immigration branch office. An obligatory interview took place, with each of us separately. We had to answer some very simple questions about the constitution. We’d brushed up. But the clerk asked me more, about myself. From lack of practice (I hadn’t conversed in English for years) I listened intently to understand what she was saying. Again, please. —“Are you willing to bear arms on behalf of the United States?” Absolutely not! I hadn’t even been expecting the question. I replied: “But I’m sixty-six.” —“But, still, in principle?” What is this principle? You’ve got young men here of an age to be drafted; they burn their draft cards and get away with it, whereas I, at more than sixty years of age, could be called up? I expressed bewilderment. Then she said that, on the form, I’d already confirmed and signed that I was willing. Wha-a-a-t? (DiLisio had filled it in without the slightest hesitation, and hadn’t told me.) I felt sick. . . . All I could do was mumble, “Well, in principle, not literally . . .”

I had been shockingly lax to miss this—that’s how casually I’d approached the issue of citizenship.

We went home and now I did read the form and, at the same time, the text of the oath—it turned out to have been sent us as well.

“. . . I absolutely and entirely renounce . . . allegiance and fidelity to any foreign prince, potentate—(they’ve kept that since the eighteenth century)—state, or sovereignty, of whom or which I have heretofore been a subject or citizen . . .”

But to which state was I renouncing fidelity? The Soviet state? My Soviet citizenship had been taken away eleven years ago. And there’s no Russian state on the planet.

But all the same, it jarred. I didn’t feel right.

“. . . I will support and defend the Constitution and laws of the United States against all enemies, foreign and domestic. . . .”

Well now, I’ve been trying to warn you about your domestic enemies, about the loony-left press and crooked politicians for years, but you never picked up on it.

There it was. I’d have to fight against my own country. And yet you’re not even capable of waging war on the Communists as such, you’ve already declared it a war on the “Russians.”

“. . . and I take this obligation freely, without any mental reservation or purpose of evasion . . .”

Ah, there’s the rub. Of course I did have a reservation: I wouldn’t go fight Russians.

But so what? Hadn’t we told plenty of lies at Soviet meetings? Hadn’t I once taken an oath of allegiance when I was in the Red Army, without identifying myself with Stalin’s top brass? And wasn’t it water off a duck’s back?

True enough, but it still jarred. An oath is laughter to the foolish and terror to the wise.

I felt very perturbed. Somehow I’d wrong-footed myself into a dark impasse. Hurting my own cause.

Meanwhile, we already knew the exact date and time of the procedure, and in which building of which town it would take place.

Alya, like a lamb to the slaughter, her face darkened, did go (accompanied by a teenage Yermolai, attenuating my absence); and there, already, was a crowd of reporters, and photo upon photo of her raised hand—and questions about me.

And the news in the American papers was confused: either both Solzhenitsyns had taken citizenship, or only his wife had and he would soon. The American press approved, of course (and even interpreted it as follows: now he’ll throw himself into US politics!). A bureau chief from the Washington Post brazenly proposed that he would spend the upcoming Independence Day at our house, for reporting purposes. (While the irrepressibly vehement Lev Navrozov did not miss the chance to check in, writing that I’d taken citizenship because his articles had frightened me.)

In Europe, though, and especially in France (we hadn’t even given this any thought beforehand, nor even imagined it) there was discomfiture and distress at this outcome: what if he really does take it? “Solzhenitsyn—US citizen? . . . This is heart-wrenching news. . . . Is this mighty figure really going to take the practical option? He wants to secure the future of his three sons. . . . He has said that America is not yet a nation. But it can, nevertheless, provide a refuge.” By coincidence, moreover, two months earlier, a rumor had arisen in France, and had found its way into the magazines, that “because of the paucity of attention in the United States” towards me—it couldn’t have been greater!—I intended to move to France. We’d never even discussed such a thing, but perhaps taking citizenship was seen as a response to the rumor?

And that rumor struck those who remained of the old wave of Russian émigrés as an insult: never, not even in direst straits, had they considered it possible to take foreign citizenship.

What could I do? I’d made a mistake. Shame comes to us all in due course.

Inwardly, though, I felt liberated that I hadn’t sworn an oath to America. (And gradually, American writers caught on: no, he hasn’t! no, he’s in no hurry! then Navrozov said that I’d “given America a slap in the face.”)

And really, what sort of a country is America? Naïve (although supposedly so enlightened and democratic): through a clutch of its professional politicians, it blithely betrays itself on a daily basis, yet will fly into a sudden brief fury—but an utterly blind one—and destroy whatever is in its path. The Soviets bring down a Korean Air Lines plane—then, in New Haven, the windows of a Russian Orthodox church are smashed in revenge and filth sprayed on the frescoes. A US army barracks in Beirut is blown up—and a quarrelsome resident of the small town of Pittsfield, Vermont, a people’s avenger, arms himself with a revolver, goes off in the morning to a local shop run by an Iranian and his Russian wife, Tanya Zelenskaya (the daughter of First Wave émigrés), and shoots her dead, thereby expressing America’s revenge on the Iranians and “the Russians standing behind them.”

Shaky. Russian soil may not be accessible to me for a long time to come, perhaps until death, but I cannot sense American soil as my own.

With no solid ground beneath my feet. With no visible allies. Between two World Forces, to be finely ground up.