Trump slams Biden for using teleprompter — while using one himself!

President Donald Trump criticized Democratic rival Joe Biden for using a teleprompter while using one himself during his Wisconsin rally on Thursday night.

‘This isn’t fair,’ he said. ‘I mean I’m watching what they’re doing with Biden where he’s using teleprompters.’

It was a cool 46 degrees in Mosinee, Wisconsin, for Trump’s rally which was crowded with supporters who did not social distance and few were wearing masks. 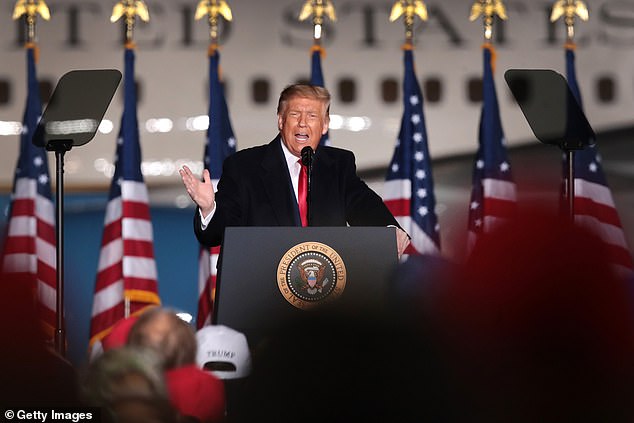 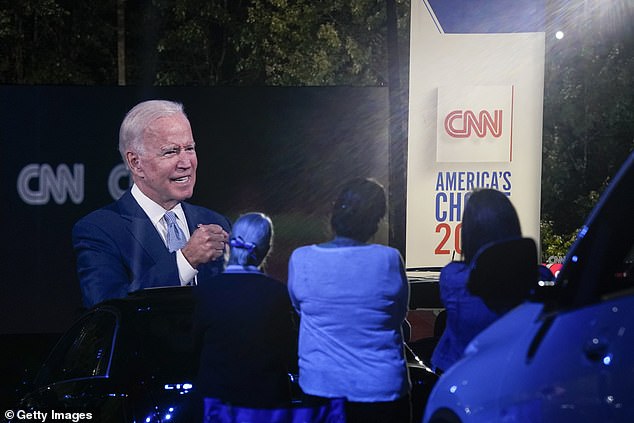 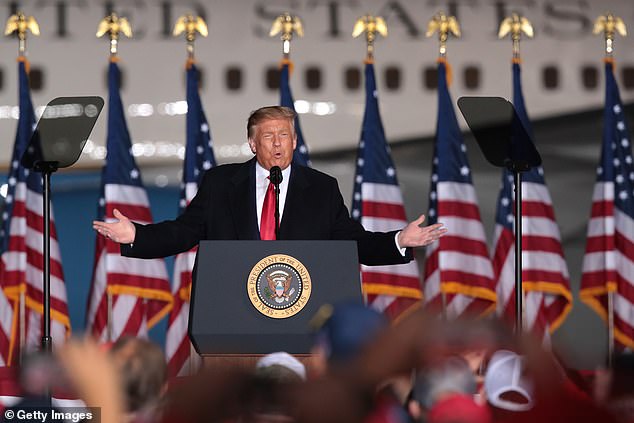 It was his fifth visit this year to the critical battleground state, which Trump carried by one point in 2016, a surprising win that helped put him in the White House.

He arrived on Air Force One with the distinctive blue and white presidential airplane pulling up to the rally site in the Central Wisconsin Airport hanger as the crowd cheered and held up their cell phones to record the arrival.

During his nearly 95 minutes of remarks, he again questioned Biden’s mental ability to be president, saying it was not because of his age – Biden is 77 and Trump is 74 – but that Biden is ‘off’ and that is ‘not disinformation.’

‘And I have no problem saying that anymore when I watch the disinformation because this is not disinformation, this is fact,’ he said.

He also attacked Biden and his running mate Kamala Harris for their recent verbal gaffes where they mixed up the order of the Democratic presidential ticket, talking about a Harris-Biden administration.

‘They are a disaster together,’ he said.

He predicted Biden, who is leading in the national polls and in many polls in critical battleground states, would not win in November.

Trump’s last visit to Wisconsin came on Sept. 1, when he met with law enforcement and toured damage from protests in Kenosha after Jacob Blake, a black man, was shot seven times by police.

President Trump, who has called himself the ‘law and order’ president, praised the police during his rally speech and said they ‘did a great job in Kenosha.’

The president spent a good chunk of his remarks touting his past victories and bragging about how he’s saved the suburbs.

Suburban voters – particularly suburban women – are expect to be a key voting block in November that could decide the election.

Biden has been polling well with this group that Trump won in 2016 but voted for Democrats in the 2018 election, handing that party back control of the House.

‘You know four years ago. Oh, he’s not gonna do well with women – I did great with women,’ the president said.

He argued that he won four years ago because Hillary Clinton voters didn’t bother to vote because they were so sure she was going to win.

‘Your wife looks at you and said darling I love that guy but he’s not gonna win; he doesn’t have a chance because in the polls he’s down,’ Trump said, making up one of the fake conversations he likes to use in his rally speeches. ‘He can’t possibly win Let’s go have dinner, then we’ll come home and watch his concession speech.’

He added: ‘But my people didn’t buy that. because my people went out to vote.’

He also claimed he lost all his friends after winning the election.

‘I lost all my friends. It’s respect for the office. Let’s face it.’ He said and added: ‘I know a lot of important people. Actually the people I like the best are the people that are less successful because it makes you feel so powerful.’

‘So I have to rely on people in Congress to be my friends,’ he noted.

He singled out lawmakers in the crowd, including former Congressman Sean Duffy, who Trump predicted would return to elected office. Republican Senator Ron Johnson of Wisconsin, a prominent Trump ally on Capitol Hill, was scheduled to join the president on Air Force One but is  now under quarantine after learning he was exposed to someone earlier in the week who has tested positive for COVID.

And the president declared game on for 2020.

‘The gloves are off,’ President Trump declared at his rally with less than 50 days to the general election. 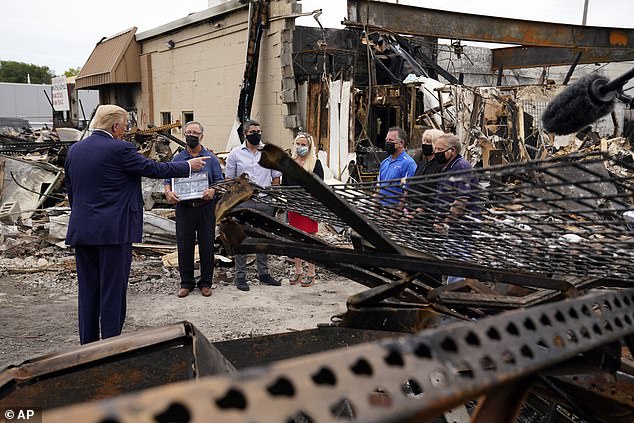 President Trump’s last trip to Wisconsin was on September 1, when he toured damage from demonstrators in Kenosha 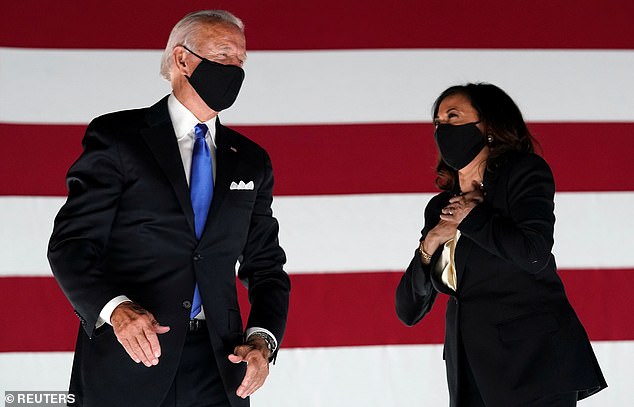 President Trump attacked Joe Biden and Kamala Harris for mixing up the order of the Democratic ticket, talking about a Harris-Biden administration 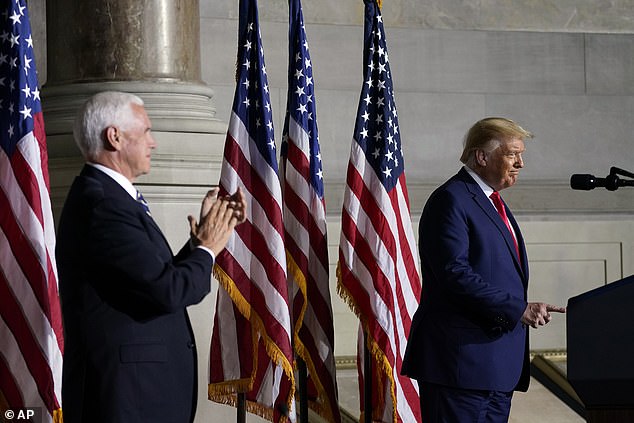 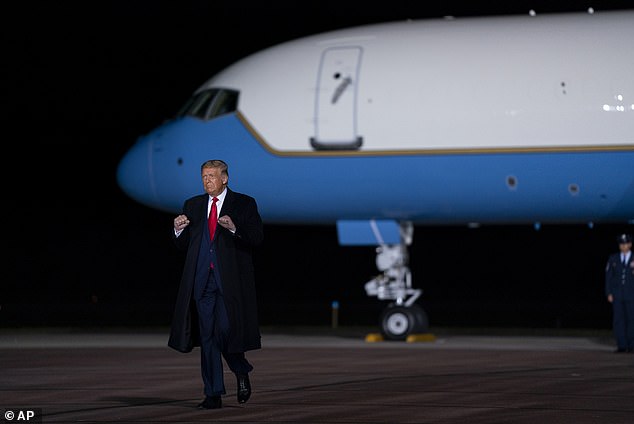 President Trump arrived at his rally on Air Force one, pulling up to the hanger location to cheers for the crowd

He noted it was Biden’s campaign ad, in which Biden cited an article by The Atlantic that alleged Trump called American troops ‘suckers’ and ‘losers’ that prompted the new level of campaign vitriol. Trump has denied the allegations in The Atlantic piece.

‘I said the good news about that as the gloves are off, I can now call him grossly incompetent The man is incompetent been there for 47 years, he didn’t do a thing. Now all of a sudden, in years where he was never considered smart, but now he’s really concerted smart. And now all of a sudden he’s gonna do what he never did it 47 years you’ve got to do this and that, everything that I’m doing everything that we’re doing,’ he said.

Trump started off his rally attacking Biden, who was appearing at a town hall broadcast on CNN and hosted by Anderson Cooper.

‘I see he’s up there tonight getting softball questions from Anderson Cooper. They don’t ask me questions like that,’ he said. He then attacked the format of the town hall, which featured people in their cars as a ‘drive up’ town hall out of concerns about COVID: ‘They’ve got cars and it’s the weirdest thing I’ve ever seen.’

Cooper, in return, at the end of Biden’s event, noted President Trump was also invited to join the network for a town hall.

‘We’ve also invited President Trump for a CNN town hall. We look forward to having the president join us before Election Day perhaps,’ he said.

Trump, meanwhile, touted the return of football and said it meant people could enjoy games and then go home to their mansion.

He also said he turns off the TV sometimes because he can’t watch himself.

‘We have enough politics. We don’t want to watch now on Sunday – oh here we go again with the politics – let them play football, let them stand and salute or put your hand on your heart and be proud of our country, and be proud of our great American flag, and then go home to the mansion and have a good time,’ he said. 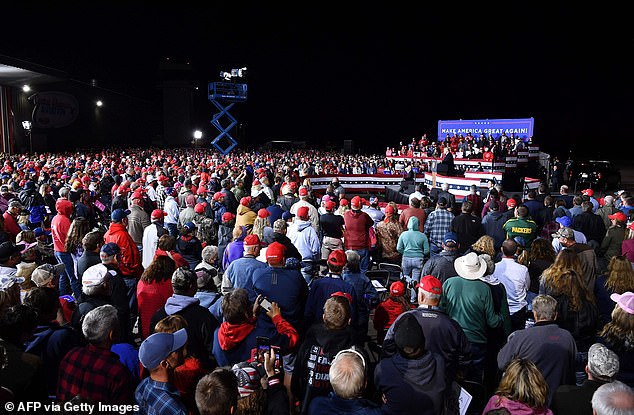 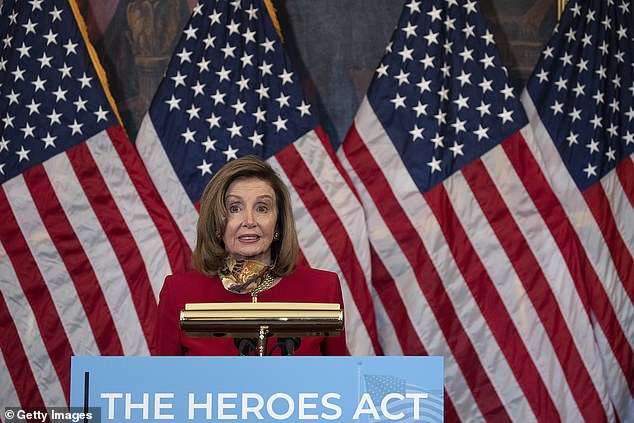 President Donald Trump also attacked Speaker Nancy Pelosi in his remarks, saying she is crazier than a bed bug 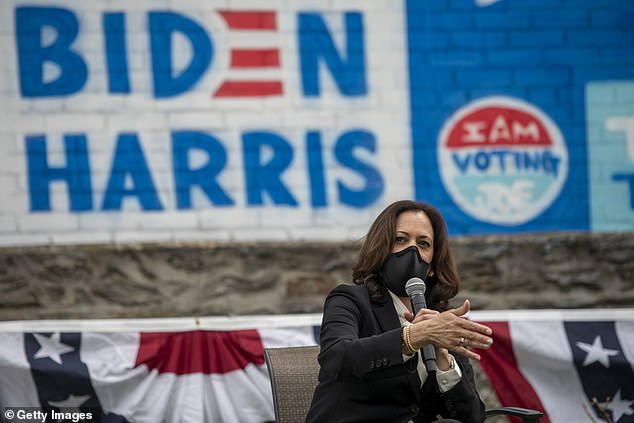 He attacked Pelosi for visiting a San Francisco hair salon while they were only to operate outdoors because of the coronavirus pandemic. Footage from the visit was leaked by the salon owner and Pelosi claimed she was set up.

He repeated his insult of her as ‘Crazy Nancy.’

‘She decided to make a nice little stopping at the beauty parlor added that worked out not too good, it didn’t work out too well,’ he said. ‘Can you imagine the owner of the beauty parlor is a MAGA lady she loves Trump.’

He said he’d consider letting the owner do his hair.

‘As far as I’m concerned, I think she’s fantastic,’ he said. ‘I love her, she could do my hair at any time.’

‘Wait till you see what Mike Pence does to her in the debate,’ he said.

Trump repeated his charge that Harris is more liberal than Bernie Sanders and pulling Biden to the left.

He also said being vice president was ‘no way’ for a woman to become president and ‘people would not want’ her to become commander in chief through the ‘backdoor.’

And he repeated his new term for his rallies that he calls them ‘peaceful protests’ – which he claims is a counterpoint to the Black Lives Matter protests that are taking place around the country.

‘And then I’m saying well what are you allowed to do? Sir you’re not allowed to do anything. I mean there is one thing but it doesn’t apply to you. What is it? Well, you are allowed to protest. Oh really,’ he said, riffing a conversation with aides.

‘You’re allowed to protest, so you can’t go to church but you could rip the hell out of the streets of Main Street and Fifth Avenue,’ he added, ‘burn down the buildings, climb over each other’s fence, you could climb right over that face. You don’t have to wear masks, you have to do anything, 25,000 people walking down the street looters anarchist agitators burning down stores.’ 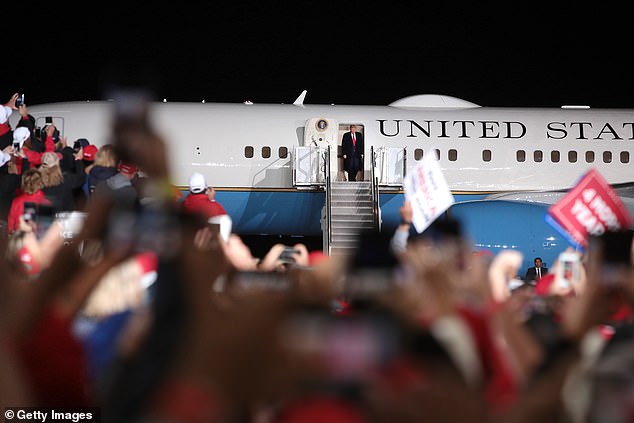 President Trump arrives for a rally at Central Wisconsin Airport in Mosinee, Wisconsin 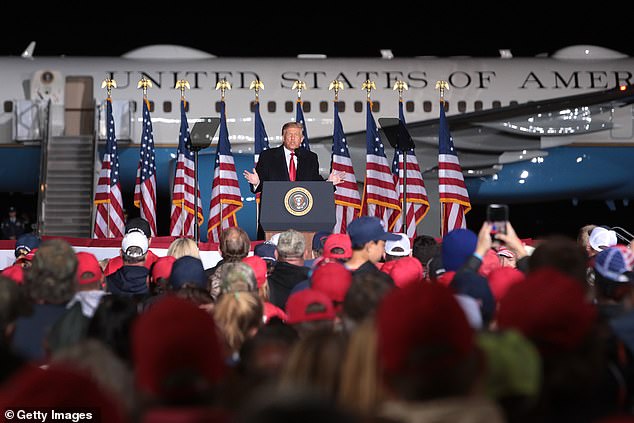 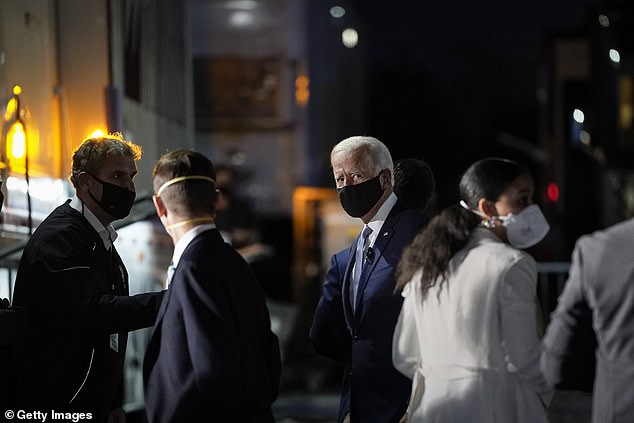 Joe Biden was in his home town of Scanton, Pennsylvania, for his town hall

Trump also reiterated his greatest hits against Biden – that if he wins the economy will tank, a left wing mob will rule the country, people won’t be able to go to church, and the second amendment will disappear.

‘He’s shot,’ he said of Biden, which has become his regular attack line against his Democratic rival.

He also touted his economic record and how he helped the state’s dairy industry with his USMCA deal.

‘Biden would absolutely eradicate your state’s economy,’ he told the crowd.

‘I know the state very well it’s one of the reasons I made that great deal with Canada and Mexico but Canada because they would take advantage of you so badly on your dairy products,’ he said.

He then went on a long rant about how Canada tried to take advantage of them and is a great deal maker but he managed to defeat them.

‘They tried to take over that business too along with all of the other dairy products, where it was just massive and horrible what they did. And that really got me going the little specialty specialty products, a small portion but you know what that was it. And we have a great deal. The USMCA is a great deal and I’m very honored to have done it, but it was all because of specialty milk,’ he said.

‘And the way you were taken advantage of by Canada you know,’ he added. ‘Oh, Canada, we love to hear the song right. But let me tell you they are very tough, and they’ve taken advantage of our countries for many, many years. And I will tell you this, they’re not so happy now but at least they got a deal. But you’re happy, and it’s about time you were happy. You now have a great deal and you’re not going to have your companies leaving from Mexico anymore, or Canada, and you’re not going to have to make your product in Mexico or Canada.’

Biden leads in polling in the state, up by nearly seven points in the RealClearPolitics polling average of Wisconsin polls.

Trump slammed Biden for canceling the planned Democratic National Convention for Milwaukee in August. Democrats held a mostly virtual event instead because of the coronavirus.

‘On Air Force One heading to Wisconsin. Biden refused to go there to apologize for not showing up for the failed Democrat Convention. So funny to watch the Fake News fawning over Sleepy Joe’s ridiculous ‘car press conference’. Pathetic!,’ Trump tweeted in route to the state.

In his remarks, he said Biden ‘let you down when he never even came back to Milwaukee,’ adding ‘I came to Wisconsin a lot.’