Ruth Bader Ginsburg: The political ramifications of a political jurist

Justice Ruth Bader Ginsburg died Friday night after 27 years on the United States Supreme Court. I’m ignoring the Romans warning de mortuis nil nisi bonum (of the dead, say nothing but good). Ginsburg used her seat on the Supreme Court as a political office and, reputedly, her dying wish was political. The politicization of her Supreme Court seat and the political fallout from her death are, therefore, appropriate topics.

Unlike me, the usual leftists who loved her too much (as well as a few Republicans who ought to know better) think that the best encomium for Ginsburg is that she “fought” for “justice and equality”:

A shock. A sadness. A great loss. The passing of Ruth Bader Ginsburg leaves a hole in a nation already reeling. She is an American hero, in every sense. We can honor her by joining to carry forth her legacy of equality, empathy, and justice. May she Rest in Peace.

Throughout her life and career, Justice Ruth Bader Ginsburg fought on the right side of history and actively worked to deliver the promise of full equality for all people. She was an icon, a trailblazer and a hero to so many. https://t.co/35b3SbTr6U pic.twitter.com/d7KpQOf73o

Justice Ginsburg fought tirelessly for gr8er justice, equality &opportunity for all ppl. She was a trailblazer in so many ways &for so many ppl Her sharp legal mind, tenacity &resilience leaves a remarkable imprint on our nation Barbara + I join our nation in mourning her passing

That praise — that she “fought” for “justice and equality” — sums up everything that was wrong with Ginsburg for it describes a political activist, not a judge. The Supreme Court is supposed to consist of nine people who try, apolitically, to ensure that the United States is run along constitutional lines.

Ginsburg, though, had little love for the Constitution. She was quite open about that in 2012 when she offered some “helpful” advice to the Muslim Brotherhood in Egypt as it was contemplating the Egyptian Constitution of 2012:

“I would not look to the U.S. Constitution, if I were drafting a constitution in the year 2012,” Ginsburg said in an interview on Al Hayat television last Wednesday. “I might look at the constitution of South Africa. That was a deliberate attempt to have a fundamental instrument of government that embraced basic human rights, have an independent judiciary. It really is, I think, a great piece of work that was done.”

The South African Constitution does not promote a small government for free people who possess inherent rights that must be free from political interference. Instead, it’s a micromanaging monstrosity that identifies “rights” (some copied from us), that are, in fact, privileges subject to the political winds. 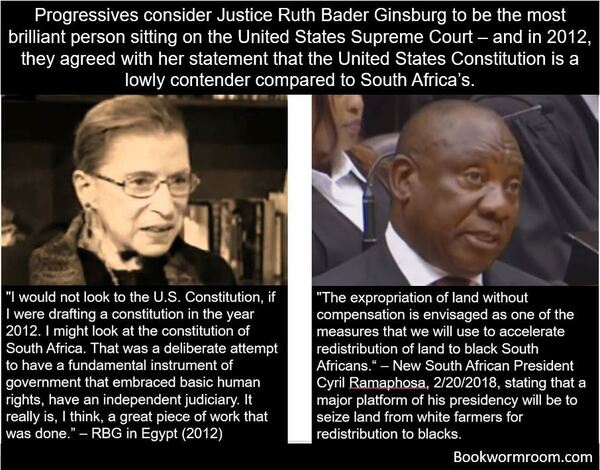 Ginsburg was also a covert eugenicist. In 2009, she confessed that she had imagined abortion as a way to get rid of undesirables:

Frankly I had thought that at the time Roe was decided, there was concern about population growth and particularly growth in populations that we don’t want to have too many of. (Emphasis added.)

Since the late 19th century, when progressives have spoken about getting rid of undesirable populations, they’ve meant blacks. Of the 61 million babies aborted since Roe v. Wade, 32% have been black. Blacks make up less than 14% of the population.

Ginsburg was also an awful judge. A good Supreme Court opinion, like a solid house, is built on a constitutional foundation, with the materials coming from clear and strong precedent and law. Ginsburg’s opinions, especially when she was pushing political ends, were composed of random bits and pieces of law that could be cobbled together to make a rough shack. She and her clerks hid this shoddy construction in muddy and muddled writing surrounded by myriad case citations that were never entirely on point.

That Ginsburg saw her role as political was shown by the fact that, even on her deathbed, she tried to manipulate Trump’s constitutional authority to nominate a new Supreme Court justice. In that vein, it’s worth remembering that she abandoned judicial impartiality and interfered in the election by using her enormous popularity to speak against Trump.

President Trump was holding a rally in Wisconsin when Ginsburg died and, before he knew of her death, he spoke about the importance of strict constructionist judges who will preserve American’s inherent rights, especially those identified in the Second Amendment.

Senate Majority Leader Mitch McConnell has announced that, because the President and the Senate are from the same party, it is entirely appropriate to go forward with a judicial nomination. “President Trump’s nominee will receive a vote on the floor of the United States Senate.”

I hope the President acts swiftly. Preventing an activist majority on the Supreme Court, which will happen if Democrats seize the White House, will destroy this country more swiftly than anything else could.