AOC rallies the left: “Let this moment radicalize you” 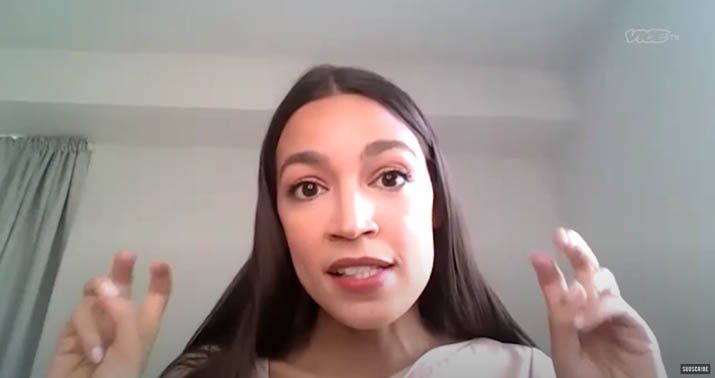 Rep. Alexandria Ocasio-Cortez has a message to her followers on social media – get out there and vote for Joe Biden whether you like him or not. How’s that for a winning campaign message?

Upset over the loss of Justice Ruth Bader Ginsburg, Sandy from the Bronx turned to Instagram to rally her faithful followers – all 6 million of them. She dramatically said that Ginsburg’s death is “earth-shattering” and the balance of democracy hangs on whom the Supreme Court justice is replaced. We are at a “tipping point” now, you know, and she wants her supporters to let this moment radicalize them.

The freshman “Squad” leader urged her supporters not to despair, but rather mobilize in a mass way because reproductive rights, marriage equality, labor protections, climate change and health care were now all at a “tipping point.”

“Let this moment radicalize you,” Ocasio-Cortez said late Friday in a social media video. “Let this moment really put everything into stark focus because this election has always been about the fight of and for our lives. And if anything, tonight is making that more clear to more people than ever before.”

In an Instagram live video posted around 10:30 p.m, the freshman Democrat urged some 45,000 people watching to double-check their voter registration immediately, organize for the election and reach out to friends and family to get them to turn out.

“I need you to be ready,” Ocasio-Cortez said.

Funny, I think the far-left is already radicalized. I’m not sure how much further they can go. There already are riots in the streets and destruction of entire blocks of cities, as we have seen throughout the Summer of Love. Large, agitated mobs show up at the private residences of elected officials to disrupt their neighborhoods and make threats. How much more violence does AOC wish to incite? She ominously says, “I need you to be ready.”

Her focus is on getting out the vote for Sleepy Joe. She has resorted to a pitch that Jill Biden made during the Democrat primary season – vote for Joe even if you don’t like him. Remember when Dr. Jill did television interviews and told viewers they should just “swallow a bit and vote for Joe”? Well, AOC has taken the same approach. She knows that Biden still has an enthusiasm problem with Bernie Sanders’ supporters, like herself, so she has to get them motivated to get out and vote for Joe.

She speaks in an authoritarian manner, as a young Marxist wanna-be. The Instagram post is a full 40-minute diatribe. “We need to focus on voting for Joe Biden. I don’t care if you like him or not.” She even told them that after the election, even if Biden loses, they will experience a lifestyle change – there will be no more going back to brunch. Now that claim is not only odd but it’s kind of funny, right? In her privileged little lefty bubble, giving up brunch is a major life change. Though she doesn’t say why that sacrifice must be made, her message is they cannot be complacent, victory in November or not.

And after we work to command victory in November, I need folks to realize that there’s no going back to brunch.

We have a whole new world to build. We cannot accept going back to the way things were, & that includes the Dem party. We must deliver transformative, material change. pic.twitter.com/r7du2yOl2c

It’s interesting that she says “our democracy was broken” even before Trump. I think the message is that Trump broke democracy and only Joe Biden can fix it, isn’t it? By Saturday she was saying it’s time for Democrats to pack the court if Biden wins. “We should leave all options on the table, including the numbers of justices that are on the Supreme Court.” That has been a fever dream of Democrats for Trump’s entire term in office, though, so that isn’t anything new. Believe them when they tell you who they are. If nothing else, statements like hers prove that Democrats are just waiting for the time when they can make the ultimate power grab – expanding the Supreme Court with liberal justices, even if it means going full-on FDR to do it.

Because of rants like this from AOC and others, it is important that President Trump move quickly and announce his nominee this week. Fortunately, he knows what he must do in order to secure his third Supreme Court pick before the next inauguration happens, whether he wins or Biden wins. Democrats are threatening that nothing is off the table if they take back the White House and we know that means eliminating the filibuster as Barack Obama has told them to do and packing the Supreme Court. Democrats have been clear about their intentions.

“We were put in this position of power and importance to make decisions for the people who so proudly elected us, the most important of which has long been considered to be the selection of United States Supreme Court Justices,” Trump tweeted Saturday morning. “We have this obligation, without delay!”

Later, before departing the White House for a campaign rally in North Carolina, he told reporters that he will decide on a nominee by “next week,” calling his shortlist “the greatest list ever assembled.”

“I think it’s probably, from a legal standpoint, from a sophisticated understanding of the law, from a constitutional standpoint, I think it’s the greatest list ever assembled,” Trump said, adding he most likely will be choosing a woman.

“If somebody were to ask me now, I would say that a woman would be in first place, yes,” he said. “The choice of a woman, I would say, would certainly be appropriate.”

It’s good news that Trump is making his move this week and he is signaling his nominee will be a conservative woman. This is important, in my opinion, because there are still two liberal women on the Supreme Court and they need a counterbalance. Conservative women need a voice on the highest court in the land. Look at how the left turned RBG into a superhero, a celebrity, while the first woman to shatter the glass ceiling at the court was a Republican – Sandra Day O’Connor. She was a real history maker. Little recognition is ever given to her. It is as though RBG was the first woman.

Trump wants a vote by November 3, Election Day. This is where leadership at the top is important. Trump’s a fighter and not particularly interested in making nice with the other side. He realizes the stakes here and won’t allow the other side to shame him into submission, as past Republican presidents have been, over cries of fairness and, in this case, honoring the last wish of a Supreme Court justice. Democrats are never fair and just the talk of ending the filibuster in the Senate when they are in charge again is proof of that.