The dimmer bulbs in the Dem chandelier are openly stating their intention to pack the Supreme Court should the party win the Senate and the Oval Office. This hands an opportunity to every GOP candidate for the Senate (incumbent or challenger) to put his or her opponent on the spot, and demand a public commitment to either reject or endorse the announced plan to expand the number of seats on the court and appoint an ironclad progressive majority.

When I put together the words “Senate” and “dim bulb,” the name Mazie Hirono automatically pops up. Sure enough, Breitbart reports:

On Saturday’s broadcast of MSNBC’s “AM Joy,” Senate Judiciary Committee member Sen. Mazie Hirono (D-HI) stated that voting on D.C. statehood and Puerto Rico statehood, expanding the size of the Supreme Court, and eliminating the filibuster will be “on the agenda” in discussions among Senate Democrats on how to handle Republicans moving forward with filling Justice Ruth Bader Ginsburg’s Supreme Court seat.

Another dim bulb, Massachusetts Rep. Joe Kennedy, who just lost his primary bid to run for the Senate said so, too:

Rep. Jerrold Nadler, like Rep. Kennedy, has no voice in Senate confirmation, but could vote on expanding the SCOTUS:

If Sen. McConnell and @SenateGOP were to force through a nominee during the lame duck session—before a new Senate and President can take office—then the incoming Senate should immediately move to expand the Supreme Court. 1/2 https://t.co/BDYQ0KVmJe

Filling the SCOTUS vacancy during a lame duck session, after the American people have voted for new leadership, is undemocratic and a clear violation of the public trust in elected officials. Congress would have to act and expanding the court would be the right place to start.

Former Attorney General Eric Holder demonstrated his lack of understanding of the Constitution by claiming that following its explicit command that the president “shall nominate” makes any confirmed new justice “illegitimate.”

“If in fact they are successful in placing a justice on the court, I think what Democrats have to do, assuming that Biden is president and there is a Senate majority for the Democrats, we need to think about court reform. And at a minimum, as part of that reform package, I think additional justices need to placed on the Supreme Court.”

Chuck Schumer may be a lot of things, but stupid is not one of them. So, he is using the fig leaf of saying “nothing is off the table,” only hinting, not committing to, a court-packing scheme. But because the dummies have let the cat out of the bag, he,too can be pressed on the subject of committing to no court packing before the voters speak.

One of the few public defeats of Franklin Delano Roosevelt’s 4 terms as president was his plan to expand the Supreme Court and thereby gain a rubber stamp for his expansion of the federal government’s powers under the New Deal.  With the Democrats openly surrendering control of the party to crazies like AOC and Ilhan Omar, the voters have good reason to fear what the party might do if all constitutional restraint vanishes in the face of a (say) 15-member Supreme Court with 6 new radical leftist justices installed by President Harris and a Senate majority of Democrats. Hard line leftists may dominate the party, but they are not enough to win elections, other than in a few urban outposts like Mineapolis and San Francisco. 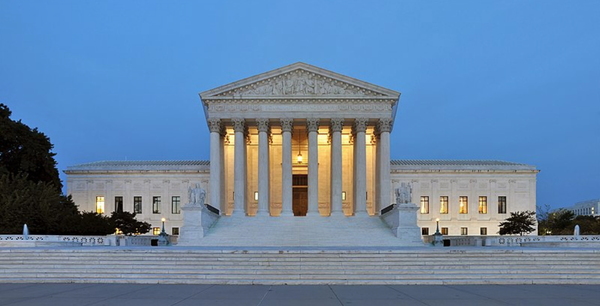 Blind anger, such as the Democrats now feel over the prospect of losing control of the Supreme Court, makes people stupid. They now are out on a limb, threatening to gut the Supreme Court as a backstop against tyranny. I don’t think a majority of voters want that. It is time to bombard every Dem Senate candidate with the demand to take a position on packing the Supreme Court. Either they repudiate the scheme or they risk losing.