In New York City, The GOP Makes A Stand For Law And Order 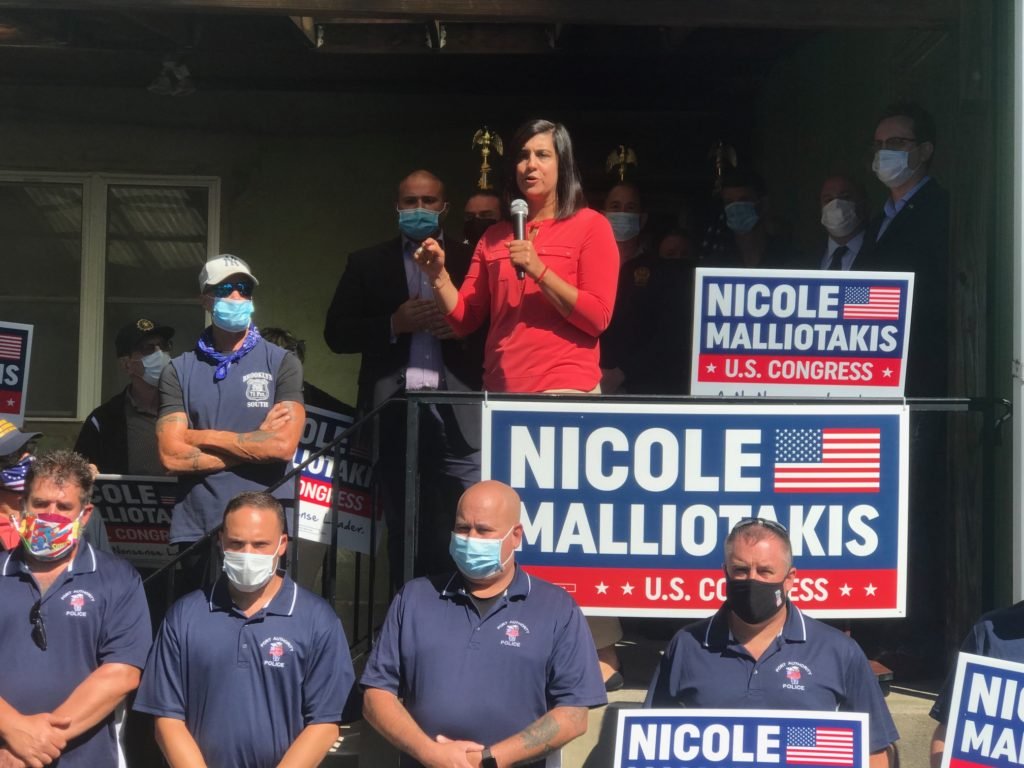 Staten Island is very much its own place in the universe, yet still an integral part of New York City. This urban suburb is also one of the few areas of the city where Republicans get elected. Until 2018, when Max Rose flipped the seat the 11th congressional district, which comprises Staten Island and parts of South Brooklyn, the seat was fairly reliably red. This year, popular state Assemblywoman Nicole Malliotakis is taking on Rose in Gotham’s only swing district, and the main issue in the election is suddenly law and order.

So it was no wonder that on this past brisk Saturday morning Malliotakis held a rally to back the blue, complete with a bevy of cops in attendance ready to go knock on doors and officials from various police unions making full-throated endorsements. This year, as in other cities, gun violence has spiked in New York City and quality of life crimes are once again becoming a way of life.

The city government’s answer to all of this? Cut the New York Police Department budget by $1 billion because, as City Councilman Joe Borelli put it, there was a Twitter hashtag to defund the police.

Just as law and order has overtaken other issues in the presidential election, so too has it in our races for the House, and NY 11 is a pretty good microcosm of these purple district races. Like many GOP candidates across the nation, Malliotakis wants this issue front and center, and judging from the response of the police unions, they want that too. They want a government that has their back, as Dan Terelli, the recording secretary of the Police Benevolent Association, put it from the podium: “We always told our officers to be safe out there, now we tell them not to get arrested.”

Just like President Trump and many Republicans this year, Malliotakis has scooped up all the police union endorsements, not a small thing in a district known as the home of cops and fireman. It’s where the home of the police chief in “Blue Bloods” is set. But Rose has previously successfully presented himself as a moderate Democrat, a war veteran who even runs a comical ad in which he calls his own party’s Bill de Blasio the worst mayor in history. But on the law and order issue, he has a slight problem.

Back in June, when such was all the rage, Rose partook in a protest march in which demands to defund the NYPD were made and signs saying “Blue Lives Murder” were carried. Sergeants Benevolent Association Ed Mullins criticized the move at the time, saying, “Why is Max Rose indicting every cop in the country right now?”

Rose’s response back in June: “I never thought I’d see the day when the head of the SBA would become a snowflake who needs a safe space.” Given the skyrocketing attacks on police, including assassination attempts since then, Rose might want to rethink that answer.

I guess you could argue that at least he didn’t urge his Twitter followers to bail arsonists out of jail, like Sen. Kamala Harris did, but insulting cops, while maybe a good look back in June, could prove to be an Achilles heel now for Democrats all over the country. “You can’t march with the defund the police crowd and get reelected in this congressional district,” Malliotakis told supporters at the rally. That remains to be seen, but is clearly the approach that she and many Democrats are taking as we edge closer to Nov. 3.

NY11 will tell us a lot about where the country and in particular the Democratic Party is these days. Rose, like Biden, is hoping that a quick pivot back to purporting to support the police will be enough to persuade voters that he is a moderate, not a Staten Island Alexandria Ocasio-Cortez. That has always been his mission, in fact. It’s hard to believe that marching with anti-police protestors helps with that very much, and it is very unlikely to be forgotten.

This is an important stand for Republicans in New York City, who at present have no representation in Washington DC, but it is also a bellwether for the nation. As the Democratic Party lurches to the left, can self-proclaimed moderates like Rose really convince voters that they are a stabilizing force in the party, not a rubber stamp for leftist craziness? The answer to that question may very well decide the balance of power in the House of Representatives next year.