Justice Ginsburg’s Death and the Future of the Supreme Court 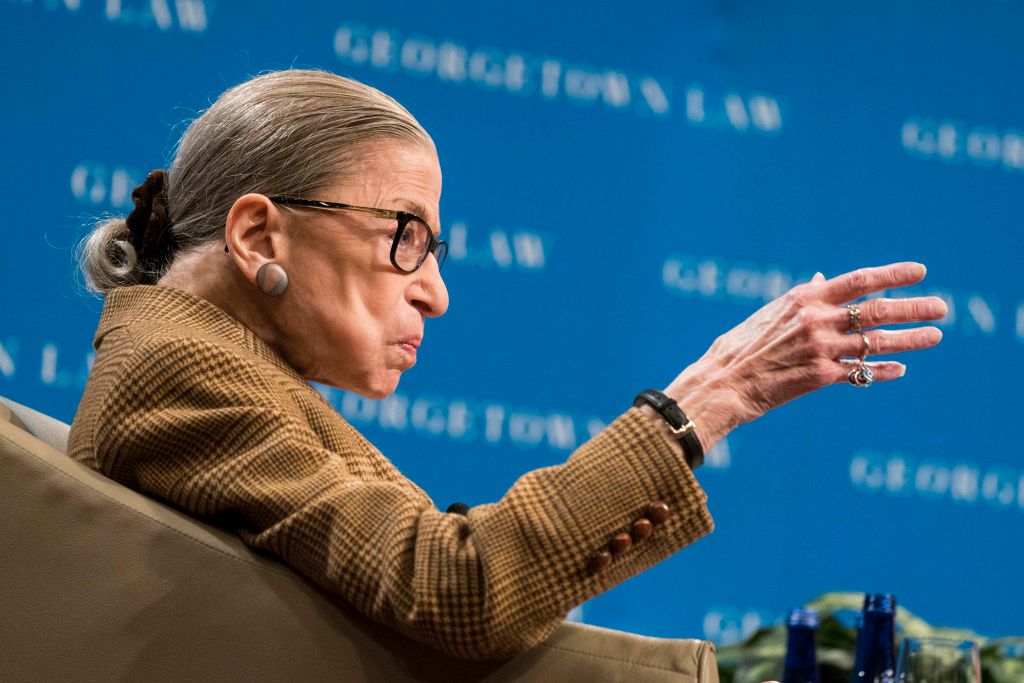 The death of the 87 year old associate justice has already stimulated predictable but unenlightening reactions.

While all concede her grit in clinging to power in the face of physical adversity, this is not a quality usually lauded in rulers. Konstantin Chernenko is not regarded as a hero in Russia, nor Paul von Hindenburg in Germany or Marshal Petain in France. Justice Douglas’ reputation in history did not benefit from his stubbornness about leaving the Court.

Though depicted as a ‘liberal’ icon, her liberalism was curiously class-bound. Her principal legacy is the conception that distinctions based on gender or sexual orientation are at all times and places presumptively illegitimate. This conception was not limited to the domains of education and employment discrimination but extended to all social issues. It led her and the three other ‘liberals’ to join in the worst rhetorical extravagances of Justice Kennedy declaring situation ethics to be a principle of constitutional law, a philosophy melding Ayn Rand with Hugh Hefner. The ‘sexual revolution’ thus proclaimed was regarded as a benefit by college coeds (and their consorts, who were given a hunting license) but was less benign for less prosperous women, deterred by lack of means or knowledge, religious sentiment, maternal instinct, or lack of appealing alternatives to immediate motherhood from obtaining abortion on demand. An explosion in unwed motherhood was the result.

One legacy of her doctrinaire position, extending at the end of her career even to third-term abortions, was violent political division in the United States. A second was the ‘feminization of poverty’ for non-college graduates, whose boyfriends no longer had to ‘either marry or burn.’ A third was the victimization of the un-aborted children of unwed mothers, since Ginsberg’s doctrines of equal rights for both sexes placed new obstacles in the way of adoptions by rendering it more difficult to terminate parental rights. The demise of the maternal preference rule in custody cases was of no benefit to women, nor was the limitation of alimony usually to three years on the premise that all divorced women shared the vocational aspirations and skills of Justice Ginsberg.

She also made unfortunate contributions to other areas of the law. In the little-noticed case of Brown v. Thomson (1983), the Supreme Court nearly extricated itself from the reapportionment-gerrymandering quagmire contributing so much to polarized politics by allowing states to have 2 to 1 disparities in the size of legislative districts provided the districts were based on counties or combinations of counties and the result did not prevent effective majority rule. A wooly concurring opinion by Justices Ginsburg and O’Connor prevented this happy result. Similarly, she initially joined in Justice Scalia’s opinion demanding that the right to jury trial trump the rigid federal sentencing guidelines, only to modify her opinion, plunging the law into a state of continuing  confusion. In another case she joined a 5 to 4 opinion allowing the judiciary to retroactively expand criminal laws in defiance of the basic principle nulla poenasine leges and over the dissents of Justices Souter, Breyer, Scalia and Stevens.

Ignoring Justice Jackson’s warnings about expanded federal criminal jurisdiction, and in defiance of the lessons of the 18th and 21st amendment, she upheld federal jurisdiction over marijuana possession offenses. Indeed, I can recall no important case in which she seriously imposed substantive constitutional limits on any federal action, either legislative or administrative. She dissented in the cases curbing federal commandeering of state governments, although such commandeering was a major objection to the Articles of Confederation and raised the specter of federal command of a million police. In religion cases, she adopted the rigid anti-clericalism that convulsed several European countries in the 1930s, a project that met its end, over her dissent, in the Supreme Court’s most recent term.

Finally, in her last phase, she repeatedly offended judicial propriety, by appearing at advocacy group fundraisers, endorsing legislation from the bench, receiving the adulation of thousands in a football stadium, and disparaging a presidential candidate.

But nomination of her opposite is not what the nation needs. The past views of Senators McConnell and Biden and the present ones of Senators Schumer and Murkowski that a Supreme Court nomination should be regarded as the spoils of a presidential election are profoundly misguided. Presidents Obama and Trump were fully within their rights in sending forth a nomination in a presidential year, and their nominations should have been accepted or rejected on their merits. Justice Frankfurter wisely observed: “If law is nothing but politics, then Hitler has won.”

The suggestion that confirmation of a new justice would result in the overruling of a host of court decisions is a false one. The British judiciary got along for nearly a thousand years without overruling decisions. There have been few such in American history. What is more likely is a process of gradual erosion, already under way with respect to Roe v. Wade. It is not unlikely that a court with a new Trump appointee would sustain a ban on third-term abortions since they have never been clearly protected, thus approximating the compromise that has eliminated abortion as a political issue in most of Western Europe. The number of surgical abortions has in any case been dropping sharply, in no small measure because of the ‘morning after’ pill, which would not have been illegal under pre-Roe jurisprudence.

Civilized societies, as Aristotle observed, do not have judges to promote distributive  political agendas. Their central function is the protection of personal liberty properly so called, by barring arbitrary imprisonment at the will of the executive. Habeas corpus, not abortion, should be the litmus test for judges. In a society as large and diverse as ours, respect for the horizontal division of power between the nation and the states is also important, both to prevent the creation of national police controllable by no one and to allow controversial social issues to be excluded from national politics. We need justices who will respect the political process, not seek to usurp it in favor of five-man or one-man rule.

The criterion for selection of the next Justice, applied by both the President and Senate, should be a record promising independence and integrity, manifested in a significant public career and in a willingness, where appropriate, to defy both the cultural zeitgeist and party allegiances. His or her career should be one focused on the structure of government, not the attainment of particular short-term political results. Few among today’s judges and law professors meet this standard.

One such is Judge Jeffrey Sutton of the Sixth Circuit, who has published a book about federalism and who  earned the disfavor of the Federalist Society by upholding Obamacare against a statutory challenge and that of the ‘gay rights’ movement by refusing to embrace gay marriage at a time when the Supreme Court had not done so, on Learned Hand’s premise that inferior court judges should not anticipate doctrines that “are in the womb of time, but whose birth may yet be distant.” Another is Professor Clare Huntington of the Fordham law school, who, although a former Blackmun law clerk and a contributor to feminist symposia, is a ‘difference feminist’ whose focus has been on family law, not constitutional law, and who has also written thoughtfully about federalism and immigration.

Nomination of either or someone like them is too much to hope for, and would not stay the slanderers and fanatics on both right and left. But it would well serve the nation in a difficult time.

George Liebmann, a Baltimore lawyer, is the author of The Common Law Tradition, A Collective Portrait of Five Legal Scholars, among other works.