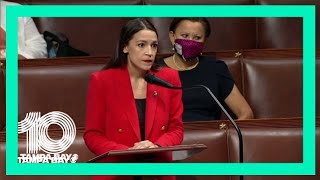 Rep. Alexandria Ocasio-Cortez’s outrage over a Republican lawmaker’s verbal assault has broadened into an extraordinary moment on the House floor. Ocasio-Cortez and other Democrats took to the House floor Thursday to demand an end to a sexist culture of “accepting violence and violent language against women.”

They called out Florida GOP Rep. Ted Yoho, who had angrily confronted Ocasio-Cortez on the House steps this week and called her names.

Yoho expressed some contrition this week, but Ocasio-Cortez rejected it as insufficient.

Ocasio-Cortez and her colleagues cast the incident as all-too-common behavior by men, including President Donald Trump and other Republicans.

Rep. Ted Yoho of Florida is denying aiming a sexist slur at the freshman New York lawmaker. Ocasio-Cortez rejected Yoho’s remarks, saying he hadn’t mentioned her name or specified what he was apologizing for.

She also said what she heard was a vulgar slur. Yoho made his remarks on the House floor a day after Ocasio-Cortez said he’d angrily harangued her outside the Capitol over her linkage of joblessness and some recent crimes.

10 Tampa Bay is the local CBS affiliate for Tampa Bay, Florida. We deliver the best in breaking news, live video coverage, and original journalism covering topics that matter most to Floridians. Subscribe for more; videos are updated daily!