“Some have likened People of Praise, a self-described charismatic Christian community, to the totalitarian, male-dominated society of Margaret Atwood’s novel ‘The Handmaid’s Tale,’” Reuters wrote. 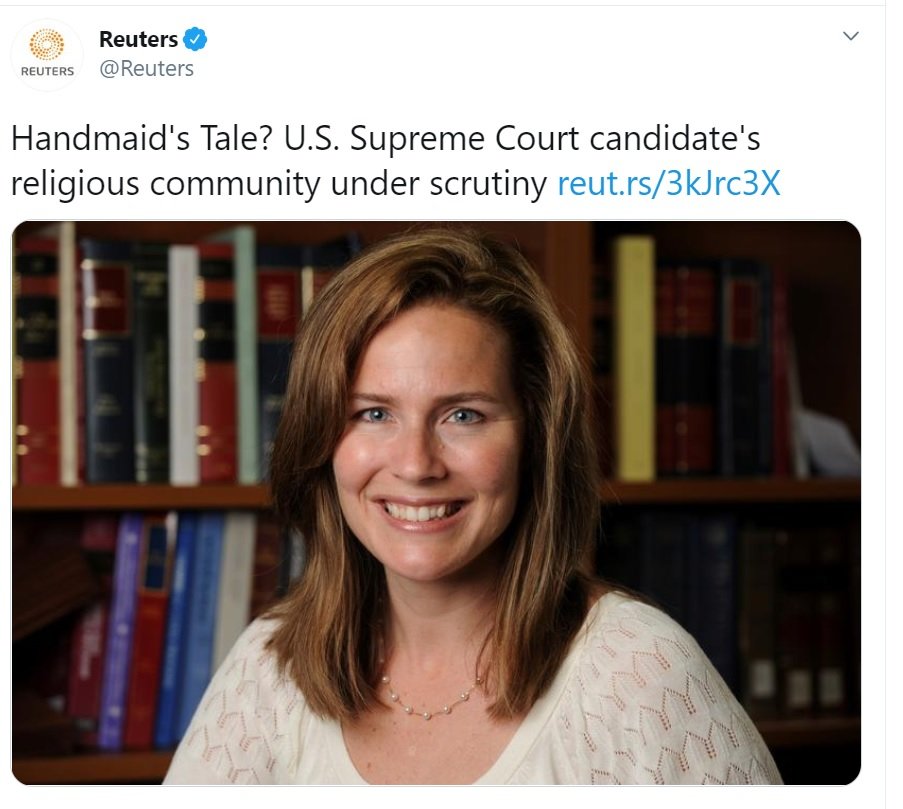 However, the legacy outlet’s deployment of terms referring to those who have made the comparison such as “some have likened” and “others call” never specified who exactly is connecting “People of Praise” to the Handmaid’s Tale besides a single ex-member who wrote a blog post.

On Monday, Newsweek made the same comparison in a piece that that had be corrected with the following note:

Correction: This article’s headline originally stated that People of Praise inspired ‘The Handmaid’s Tale’. The book’s author, Margaret Atwood, has never specifically mentioned the group as being the inspiration for her work. A New Yorker profile of the author from 2017 mentions a newspaper clipping as part of her research for the book of a different charismatic Catholic group, People of Hope. Newsweek regrets the error.

While Barrett, a devout Catholic, currently serving as a circuit judge on the U.S. Court of Appeals for the Seventh Circuit has yet to receive the formal Supreme Court nomination following Ginsburg’s death, Trump reportedly met with Barrett Monday. Despite having been on the president’s “list,” Barrett was passed on for the 2018 opening left by retiring Justice Anthony Kennedy, which was ultimately filled by Justice Brett Kavanaugh.

Trump said Tuesday he would announce his pick on Saturday.

I will be announcing my Supreme Court Nominee on Saturday, at the White House! Exact time TBA.

Whoever Trump decides to nominate, they can expect another ugly battle from Democrats and their media allies like Kavanaugh did in 2018.