Trump 2020 road murals “being investigated” and removed in Massachusetts 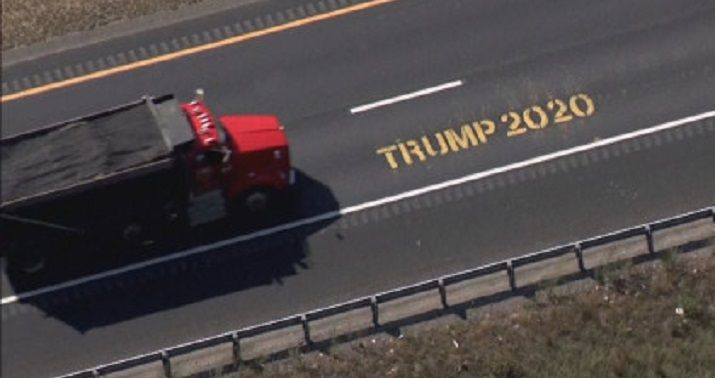 Over the weekend, some new, unauthorized “street art” showed up at multiple locations in the towns of Carver and Middleboro, Massachusetts. Out on the pavement of state route 44, someone painted some very neatly stenciled murals reading “TRUMP 2020.” They appear to have been a couple of car lengths long and were applied using yellow paint as has been the case with so many other street murals we’ve seen cropping up around the country this year. But nobody was “celebrating” these messages on the public roadways. Local officials immediately contacted the Department of Transportation, scurried to investigate the activity and hurriedly dispatched workers to cover up the displays prior to permanently removing them. Anyone who has been paying attention to all of the road mural news this year will probably spot the difference between this event and similar incidents of road defacement carrying different messages. (CBS Boston)

Transportation officials are investigating after “TRUMP 2020” was painted onto six separate locations along Route 44 in Carver and Middleboro. MassDOT policy prohibits any unauthorized markings on state highways.

The agency “will be dispatching contractor crews to temporarily cover the markings as soon as possible,” MassDOT said in a statement. Crews will come back overnight to permanently removed the pro-Donald Trump messages.

In one of the locations “TRUMP 2020” was painted twice, once in each travel lane. The messages were put on the road using yellow paint.

I’m not going to start off this particular tirade by cheering for whoever decided to paint those road murals because unless you obtain a permit, it’s illegal to deface the roadways in this fashion. And the government was quick to have the DOT point out that their policies “prohibit any unauthorized markings” on the roads.

With that said, it would be nice if there was just a bit less hypocrisy on display here. A pro-Trump message calls for an immediate investigation to identify the perpetrators and work crews to paint over and later scrub the paint from the roads. But as we’ve already seen, the DOT takes a decidedly different position (or lack thereof) when it comes to Black Lives Matter or Defund the Police murals, don’t they?

Let’s return to that statement from the DOT for a moment. Their policy “prohibits” unauthorized markings, right? Oh, really? Well, how about this beauty located right in the middle of Boston? You can click through to view the picture which required aerial photography to fit it all in. That Black Lives Matter mural takes up the entire width of Washington Street and stretches for a city block. Nobody asked for a permit before that was put on the road and yet the DOT hasn’t moved to “investigate” it or remove it. In fact, the Mayor of Boston actually praised it.

Here’s another one painted in the center of Worcester. Anybody from the DOT looking into that one or removing it? Don’t be silly. Of course they aren’t.

This isn’t all that dissimilar to the situation in New York City. The Mayor there has not just turned a blind eye to the painting of massive BLM murals, but even participated in painting them. But when a local artist painted a (literal) thin blue line on the median around one police precinct station, the DOT was immediately dispatched to make him remove it. A separate request for a permit to paint a Blue Lives Matter mural on a different street has been forced into a lawsuit that the Mayor is fighting tooth and claw.

The reality here is that municipal governments around the country have adopted a double standard by establishing a precedent where the public streets can become forums for political speech, but then picking winners and losers in terms of who has the right to engage in these displays. And you can always predict who the losers will be in that debate.