Trump and the Troops: The Media’s Latest Self-Satisfied Grift 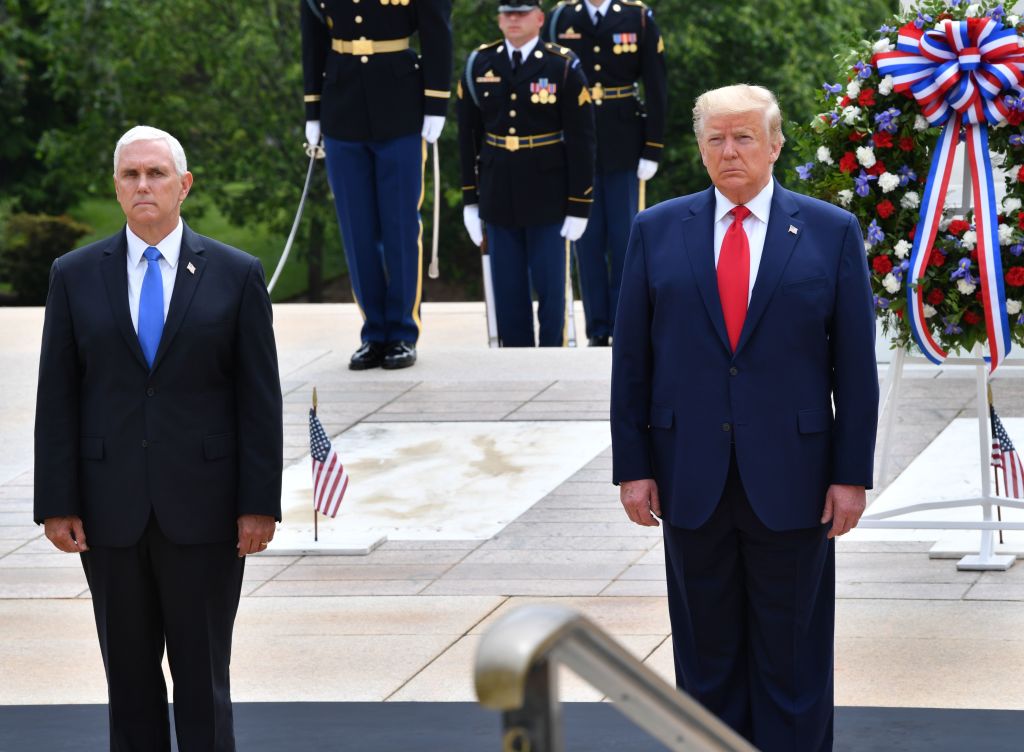 US President Donald Trump(R) and US Vice President Mike Pence participate in a Wreath Laying Ceremony at the Tomb of the Unknown Soldier at Arlington National Cemetery to commemorate Memorial Day, and honor those who have died while serving in the US Armed Forces on May 25, 2020 in Arlington, Virginia. (Photo by NICHOLAS KAMM/AFP via Getty Images)

Watch how this is done: Joe Biden plans to resign after only one year in the White House, according to someone with direct knowledge of the Bidens’ plans.

A senior official at Northern Virginia Community College confirmed that Jill Biden reached out recently to see if she could resume teaching if her husband was elected—Dr. Biden famously taught there while her husband served as vice president and had befriended the official. The College immediately offered her a four-year cycle of classes. She wanted, however, to make only a one-year commitment. “We won’t be in Washington for the full term,” Biden reportedly explained. “Joe’ll stay in office for a year and work on some signature issues like cancer research, but Kamala will be doing the heavy lifting from day one. Joe will quietly resign and give her plenty of time to make the job her own. It’s set in stone I’m afraid. I wouldn’t let him run any other way given his health.”

I made that up. See how easy it is? Start with a known bias, that many people believe Joe Biden won’t serve his whole term. Play off the fear that he’s a Trojan Horse. Tell people what they already believe: Harris is selected, not elected. Include some truth (Dr. Jill Biden did teach at Northern Virginia Community College during the Obama administration). And then take advantage of the magic of anonymous sources.

This comes in the context of an article in The Atlantic by Jeff Goldberg, where anonymous sources claim the president disrespected America’s military. Goldberg’s piece was followed by former Russiagate FBI agent Peter Strzok telling another Atlantic writer that Trump is controlled by the Russians. Then came the return of Alexander Vindman (powered by an anonymous source, er, “whistleblower”) and excerpts from Bob Woodward’s book Rage claiming without details that Dan Coats and Jim Mattis planned “collective action” against the president.

Those are only a few recent examples. Amid a four year tantrum, the media has recklessly published anything anti-Trump without concern for truth, little better than the minor celebs who take to Twitter to announce #TrumpisaPedo. Journalism has become farce, its purpose not to inform but to advocate. Influence ops. Propaganda.

It’s worth making an example out of Goldberg’s article because of its exclusive use of anonymous sources in pursuit of advocacy, in this case, trying to chip away at Trump’s pro-military base. Though Goldberg talks about events from as long as four years ago, the actual article was released alongside a Military Times poll showing Biden gaining some support among service members, and dovetailed with fuzzy reporting that Trump ignored Russian bounties on Americans in Afghanistan.

The questions of timing and motive make the validity of the sources ever more important. How do we know Goldberg didn’t make things up, or at least allow himself to be used for a partisan end as he did in advocating for the whole false narrative of WMDs in Iraq? Unless you’re Goldberg’s mother or the town mayor from Jaws, credibility comes from sources, not a writer’s inner soul. Goldberg is lacking.

As a diplomat, I staffed overseas presidential visits from Reagan to Obama. I sat in on planning meetings and got a pretty close-up view of the Secret Service. The president exists inside a series of bubbles, like Russian nesting dolls (forgive me). The innermost bubble, the one where someone might hear his personal thoughts, is reserved for very, very few people. The universe of those who could have been physically close enough to Trump (or any president) to overhear such sensitive remarks is tiny.

So if we know the names of the sources, it will be easy to place them in that special group, or not. It will be easy to check photos to see if they were where they would have needed to be to overhear. Fact-checkers could determine who else was around to confirm or deny the story (11 Trump officials deny it by name, zero confirm). Knowing the names resolves the risk. Trust but verify.

Goldberg’s sources say Trump remarked to former White House chief of staff and retired Marine General John Kelly, “I don’t get it. What was in it for them?” A real reporter would also provide context (Bob Woodward in Rage is also guilty of this, dropping a turd quote in the public punch bowl and then moving on), asking what was said before and after the damning remarks. It is not uncommon for civilians to respectfully inquire as to what motivates men to run into fires, to sacrifice themselves for a buddy, to stand in harm’s way.

Trump supposedly said this at the Arlington National Cemetery gravesite of Kelly’s son, a Marine killed in Afghanistan. This photo shows who was there—Kelly, two family members, Trump, and Pence. This would have been the moment when Trump would have made his remark, and those are the only five people on earth who would have heard it. Trump and Pence deny it; the Kelly family has been silent. The same photo set shows Trump meeting later with other Gold Star families, none of whom claim he made any disparaging remarks.

There is also a sniff test to be applied. The credibility of journalism should not depend on the reader’s biases; that’s the domain of late-night Trump Sucks You Guys comedy. Trump mocking Kelly’s son at graveside would be among the most horrible things anyone could do to a parent. Who would say such a thing? There is no record of the worst humans in history, men like Hitler, Stalin, and Pol Pot, saying such things. There is no record of concentration camp guards, men capable of killing children, saying such things. Would Kelly, a blooded Marine, stand silently with his family as accomplices in their humiliation, then release the information only years later while hiding behind the skirt of a journalist to score a glancing political point?

Though it got much less attention, The Atlantic followed up Goldberg with a piece that included a named source and allowed him to list out baseless accusations of treason. Former FBI agent Peter Strzok sees grassy knolls everywhere. The Atlantic helps him along, introducing a back-and-to-the-left theory by saying, “Despite multiple investigations by the FBI, Congress, and Mueller’s team, Americans have still never learned the full story about the Trump campaign’s relationship with Russia.” Like what?

Well, Strzok says he doesn’t really know, but it must be hidden in Trump’s taxes (which the IRS has reviewed for decades). The writer feels it in her ample gut, too, stating in her best Kevin Costner voice, “Strzok was getting too close to the truth.” Ah, from Strzok: “I do think the president is compromised, that he is unable to put the interests of our nation first, that he acts from hidden motives, because there is leverage over him, held specifically by the Russians but potentially others as well.” That is a straight-up accusation of treason.

And there both the writer and the source leave it, no specifics, no follow-up questions, not even a pee tape. We’re left to infer that They Are All In On It, everyone who could have blown this wide open is dummied up—FBI, CIA, NSA, DOJ. Remember Mr. X, the character in JFK played by Donald Sutherland? Strzok wants to be him. Problem is he’s not good enough for an Oliver Stone film, so he’s just out there pimping his book.

The Atlantic articles are sucked oranges. Writing this after the hot takes have faded, it’s clear they had little lasting effect and thus weren’t even decent propaganda. Goldberg’s article got far too much attention for how little it had to say. But it has not gotten enough review as a marker, the place we had to end up when the media wholeheartedly advocated for the Iraq war based on lies, literally rewrote history with the 1619 Project for political ends, buried things of concern with Hillary, helped create Russiagate, and used its own freedom of speech to quash dissenting voices as unpatriotic in 2003 and as “useful idiots” and Russian bots since.

In defense of what they call advocacy, crappy journalists often cite Walter Cronkite’s late opposition to the Vietnam War or Ed Murrow’s shaming of Joe McCarthy. Not only are such gold-standard examples rare enough that the list often ends there, they ignore the negative examples above. They also ignore how Cronkite’s and Murrow’s advocacy came at the end of dispassionate study and deep introspection. Cronkite and Murrow broke the objectivity wall not for a favored candidate, but over issues of deep national importance. And they understood the difference before acting.

Peter Van Buren, a 24-year State Department veteran, is the author of We Meant Well: How I Helped Lose the Battle for the Hearts and Minds of the Iraqi People, Hooper’s War: A Novel of WWII Japan, and Ghosts of Tom Joad: A Story of the 99 Percent.