Tulsi Gabbard is back, positioning herself as last sane Democrat 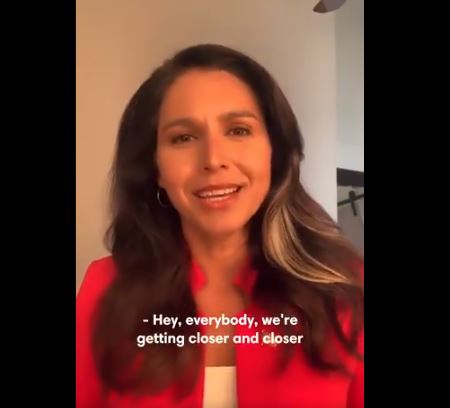 Tulsi Gabbard is back, looking splendid as ever.

And she’s got a cause any sane voter interested in free and fair elections can support, sponsoring a bipartisan bill targeting the odious practice of ballot-harvesting.  The Hawaii representative’s bill, co-sponsored with Rep. Rodney Davis of Illinois, calls for a withholding of federal funds for states that refuse to ban the practice, where sleazy political operatives target vulnerable voters in their homes and “helpfully” collect their ballots for them, doing what they need to do with make sure the vote goes in the direction of their party with the broken chain of custody before turning the ballots in.  It’s a fount of potential voter fraud.

Banning ballot harvesting is not a partisan issue. It’s been used & abused in states like North Carolina and California & is ripe for fraud.

That’s why I intro’d HR8285, the Election Fraud Prevention Act w/ @RodneyDavis – to protect the integrity of our elections & our democracy pic.twitter.com/ltZhaenSVB

It’s a striking move, because Democrats are all in favor of the practice, given that wherever it is practiced legally, it has benefited them.

In 2018, ballot-harvesting mysteriously flipped historically red Orange County, California entirely blue, days after the election, as ballot-harvesters kept “finding” ballots and turning them in, until they got the result they wanted.

There also was an outrageous case in North Carolina, where a sleazy Republican operative illegally harvested ballots from black Democratic voters and threw them in the trash to ensure that those ballots would not be counted.  The latter case forced a judge to call a new election in North Carolina.  Anything can happen when the chain of custody of votes is broken with ballot-harvesting, and it has.

Ballot-harvesting is banned already in most states because it’s a repulsively corrupt practice last done on a wholesale level in Mexico during the days of its PRI permanent party, which held power for 70 years.  Mario Vargas Llosa described that country and its entrenched one-party state where no one could change his government as “the perfect dictatorship.”

Now Tulsi has brought forth a cause any sane American who cares about democracy and fairness should care about.

The background here is interesting.  Tulsi, who is a Democrat with a independent streak and a soft spot or Bernie Sanders, is hated in the Democratic Party for not going along with their program and their machine candidates.  She personally destroyed Kamala Harris in one of the last Democratic debates, exposing her shady record as a prosecutor and single-handedly tanking her polling numbers to single digits.  Prior to that, Kamala was nearly in the lead.

Tulsi knows all about Democratic election manipulation, it seems, and has come out with a fairness measure to correct some of it — which will make her more unpopular than ever among Democrats.

Yet she has nothing to lose.  She’s leaving office.

What do we see here?  She can’t benefit from the Democrats now, and she probably won’t be able to join the Republicans, so the only conclusion we can see in this bid for fairness that she is positioning herself as the last sane branch of the Democrats.

It’s possible she sees a Democratic crackup in the future as Democrats grow increasingly desperate to hold onto their grip of power, by fair means or foul, and are willing to do anything, fair or not, to maintain that grip on power.  The PRI was eventually toppled despite its entrenched manipulations to ensure its permanent power.

Gabbard is obviously betting that the Democrats will be, too.  And she will be there to clean up.

Let’s wish her well.  Democrats need some sane voices, and right now, other than her, there aren’t any.