When Biden lost his line 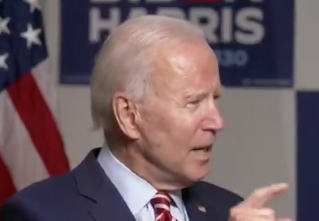 As I understand it, Joe Biden sat down for an interview with José Díaz-Balart of Noticias Telemundo in Florida on September 15. The 22-minute video of the interview is available here and is well worth watching. Biden was alert and lucid. The lies were calculated, relentless, and practiced.

In the course of the interview Biden sold out his friend Barack. Declining to defend Obama administration deportations, he commented, “I wasn’t president.” Biden touts DACA and promises an end to deportations. To him, “it’s all about family.” It’s not so much about your family — that much I can tell you. We can’t say we weren’t warned.

Biden contemplated Trump’s removal from office by the military following the election at about 17:30. He talked about “institutional racism across the board” at about 19:00. “The American people finally had the blinders taken off,” Biden avers. He throws in the case of George Floyd at around 20:30. At around 21:00 he contends that Social Security is thriving (his campaign ads to the contrary notwithstanding).

Making a pitch for the vote of Cuban-Americans in Florida, Biden opined: “This president is more like Castro than Churchill.” And that wasn’t the low point of Biden’s remarks. At least Biden’s intended audience was in a position to evaluate that particular statement.

In the video clip below, Biden struggled deliver what appears to be a scripted answer. The video catches Biden complaining that he “lost that line” of the answer (at about 10:00 of the video linked above).

Biden Tells Someone off Camera During Interview: ‘I Lost That Line’ pic.twitter.com/dZaex6cx9E

What manner of man is this? Victor Davis Hanson formulated his take in the American Greatness column “Biden, ‘the great and powerful.’”

NOTE: I have deleted a tweet asserting that Biden was reading from a teleprompter. That is false. One can see in the video linked at the top that the screen to Biden’s left played the pre-recorded questions to which Biden responded.