“Communism, avowedly secularistic and materialistic, has no place for God,” noted the Rev. Martin Luther King Jr. “I strongly disagreed with communism’s ethical relativism. Since for the Communist there is no divine government, no absolute moral order, there are no fixed, immutable principles; consequently almost anything — force, violence murder, lying — is a justifiable means to the ‘millennial’ end.”

Or, as Ronald Reagan put it, “They lie, they cheat.” Reagan quoted Vladimir Lenin: “The only morality that we recognize is that which furthers class interests.”

Deception is a method for Marxists. Martin Luther King Jr. saw it. Everyone saw it. It’s another reason why most people don’t like Marxism.

Apparently, the leaders of BLM have gotten the memo. They’re systematically purging from their website any material being flagged as Marxist or sympathetic to or suggestive of Marxism.

I’ve been forced to deal with that material. I’ve done at least 50 interviews on my new book, The Devil and Karl Marx, which doesn’t contain a single reference to Black Lives Matter, and yet, I get asked about BLM in nearly every interview. Interviewers ask about BLM’s founders, particularly Patrisse Cullors, who said of herself and co-founder Alicia Garza, “We actually do have an ideological frame. Myself and Alicia in particular are trained organizers. We are trained Marxists.” In an April 2018 interview, Cullors added, “I went through a year-long organizing program at the National School for Strategic Organizing…. We spent the year reading, anything from Marx, to Lenin, to Mao.” She expands on this in her memoirs, which include a foreword by America’s most famous female Marxist, Angela Davis, a mentor and inspiration for her.

I always get asked about the “What We Believe” section of BLM’s website, which underscored goals utterly unrelated to police reform, seeking (for instance) to rally “comrades” (that word was used more than once) and “cisgender” people to “disrupt the Western-prescribed nuclear family structure.”

And yet, here’s something equally eye-opening: If you click that hyperlink, it suddenly no longer works. That section of the BLM website has been scrubbed entirely. All of it has been taken down. Apparently, BLM agrees with its detractors on the right that that stuff is a red flag — and departs from its defenders on the left who denied the language was there or insisted the language didn’t say what it actually said, or meant what it meant.

Well, it’s gone. In fact, there’s no longer a “What We Believe” section at all. The Mission Statement has also disappeared.

Figuring this would happen, I took screenshots of the material months ago: 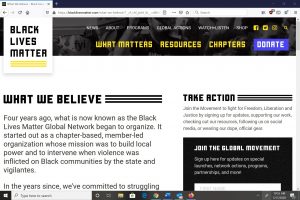 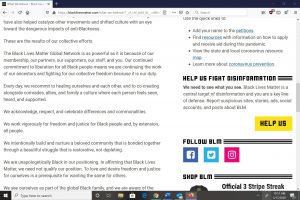 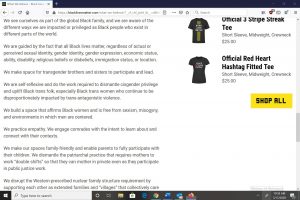 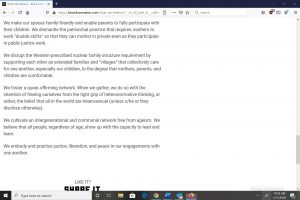 And yet, it’s striking what has not been removed from the website. What has been retained is maybe the most outrageous element of the agenda.

“We call for a national defunding of police,” candidly states Black Lives Matter under the hashtag #DefundThePolice. “If you’re with us, add your name to the petition and help us spread the word.” That statement has not been scrubbed, nor has this one, which is even more offensive: Under the tab “What Defunding the Police Really Means,” BLM leads with this awful stereotype of police officers: “We know that police don’t keep us safe.”

To repeat: “We know that police don’t keep us safe.” That’s what Black Lives Matter says.

That’s a stunning and reckless assertion that angers police — including black police. It also angers black residents in communities who feel the police do keep them safe. It angers just about everyone.

Asked about “Defunding the Police,” David Clarke, the former sheriff of Milwaukee County, Wisconsin (and African American), states emphatically, “The biggest losers in all this will be poor black people in crime-ridden ghettos. The police are the only thing standing between them and violent criminal predators. You’d have to loathe black people to do that to them.”

And yet, the likes of BLM activist Miski Noor insist that when fellow activists say they want to defund or even abolish the police, they “100%” mean they want no more police. Likewise, others double down: “Yes, we mean literally abolish the police,” states the title of a June op-ed in the New York Times. Or see this piece at Vox with a photo of a girl with the hammer-and-sickle T-shirt holding a sign that touts “abolish the police.” We could go and on with examples.

I’ve advised that BLM’s leaders abandon this language and use another hashtag such as “Reform the Police.” And yet they haven’t. Why not? Because, apparently, they really do believe it.

Police certainly interpret it that way. How do you expect police sensitive about their difficult, dangerous jobs to react to language like “Defund the Police” and “We know that police don’t keep us safe?”

I was talking this week with a friend I’ve known since we were kids. He has been a police offer for over 20 years. If he was called to a house with a BLM sign in the front yard, would he say, “Why did you call us when you support an organization that says we don’t keep you safe?” No, he would never say that. He would do his job. He would keep them safe. “Morale is at an all-time low,” he sighed.

Again, those statements have not been cleaned up, and it’s quite telling that they haven’t. But as for the stuff flagged by critics as Marxist, including repeated use of the words “comrades,” it’s gone.

“Until recently, it was very easy to debunk the idea that Black Lives Matter is a politically mainstream organization focused exclusively on the fight for racial justice,” writes Matt Walsh, who underscores the cultural-sexual material that remains on the site. “All you had to do was point in the direction of BLM’s official website, which had a tab right at the top called ‘What We Believe’ leading to a section of the site that outlined, well, what they believe.”

This shrewd move by BLM will serve as a weapon for not only defending itself but for attacking critics. It’s a double PR coup. Previously, media marvels like PolitiFact “fact-checked” criticisms of BLM’s language to deny that BLM was saying what it was literally saying. I’ve received numerous emails from distraught parents who sent links to the “What We Believe” section to their BLM-supporting college kids who wouldn’t even click the links or who, if they did, would deny what they were reading. Now, by scrubbing the site, with all evidence nixed, leftists will be able to angrily denounce as racist liars those who claim the material was once there.

For the record, the 1619 Project is engaging in the same airbrushing of historical reality, with its defenders on the left (including CNN) protecting the process every step of the way, and denouncing those calling attention to this (including Donald Trump) as manipulative liars and, yes, naturally, as racists. (See John Nolte’s careful research.)

In sum, what BLM’s leaders believe has been removed from what BLM believes. But they’re too late. We already know what they believe. They’ve told us.