Contrary to appearances, sometimes karma does get leftists 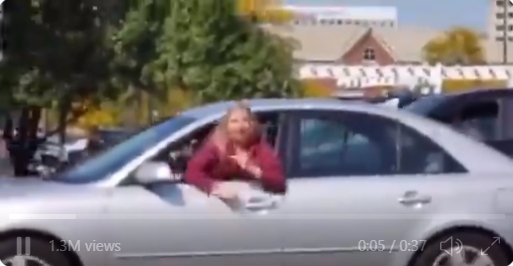 What’s been frustrating for four years is that Democrats are escaping well-deserved consequences. Those behind the Russia hoax, which is easily the most serious political scandal in American history, have not only walked free, they’ve gotten rich through book deals and speaking engagements. In America’s Democrat-run cities, Soros-funded prosecutors won’t charge people who have acted violently and, often, seditiously. This sense of karmic passes may explain the enthusiasm for a video showing a driver so busy signaling her disdain for Trump supporters that she crashes into another car — only to learn that the police were eyewitnesses.

Woman had a TDS meltdown over a MAGA street corner rally then proceeded to hit the vehicle in front of her while police were behind her 🤣pic.twitter.com/rEVEGeKNaj

If you can’t get the video to play, let me just say that it’s 37-seconds of wonderful. The woman is waiting at a light or stop sign and sees Trump supporters having an impromptu rally on the opposite corner. She gives them the double-barreled middle finger while screaming what are obviously obscenities.

Eventually, the woman’s anger so overwhelms her that she turns her whole body to face the car window and starts levering herself out. The inevitable happens: She’s taken her foot off the brake, so her car rolls forward and crashes in the car in front.

That’s good. What’s great is the sound of a siren coming up behind her. The last second of the video shows two police officers approaching her car.

This video is one more in a series of videos showing screaming, white, leftist women. At the beginning of the Black Lives Matter protests, I wrote that leftism harms white women. I included in that article several videos showing deranged, self-righteous women.

With the election drawing near, it’s getting worse. Here are a few more of these totally unhinged, white women. To begin, here’s the classic video of that one screaming woman at the moment of Trump’s inauguration:

But there are many more recent examples:

The current state of the Left:

Be prepared, it’s going to get worse.

There’s a language warning for this next one:

Something in these women is broken. They have become toxic. The only way to respond to these women, aside from fear and pity, is to tell them that, whatever they’re for, you’re against it. And for the men among you feeling left out, there’s this:

(This is WAP, the song to which he refers, expurgated.)