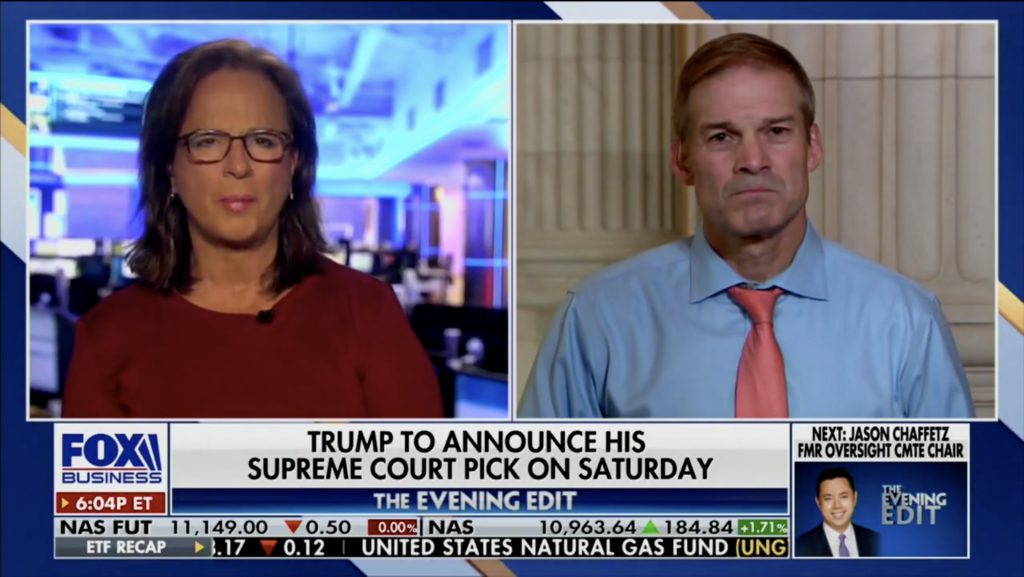 GOP House members filed a resolution on Tuesday to condemn Democrats’ plans to pack the Supreme Court if they can’t defeat President Trump’s next nominee on the Senate floor. Rep. Jim Jordan (R-Ohio) joined Liz McDonald on Fox Business’s “The Evening Edit” to introduce the resolution to the public.

“The Republicans control the Senate, we control the White House, the president is following the law submitting a nominee to the Senate, the Senate is going to move forward with that nomination just like the Constitution says,” Jordan explained. “So the Democrats say, if you do that and we win back power, we’re going to change the rules. We’re going to add six new people to the court.”

“The court has been at nine for 151 years, so this is ridiculous. I think the American people understand that,” he added.

According to Jordan, every Republican on the House Judiciary Committee signed onto the resolution and he believes that it will gain even more traction with GOP House members.

“I think every single Republican in the House will probably sign on to this. As I said every single republican on the Judiciary Committee already has,” Jordan explained. “This is that kind of document. It helps create the debate, and make the argument, even bigger for the country to understand what the Democrats are trying to do.”

While many Democrats have threatened to pack the courts if they are given the chance, recently deceased Justice Ruth Bader Ginsburg, whose seat is up for grabs after her passing, openly expressed her disdain for court-packing.

“Nine seems to be a good number. It’s been that way for a long time,” Ginsburg told NPR in July 2019 about the Supreme Court. “I think it was a bad idea when President Franklin Roosevelt tried to pack the court.”

“If anything would make the court look partisan,” Ginsburg added. “It would be that – one side saying, ‘When we’re in power, we’re going to enlarge the number of judges, so we would have more people who would vote the way we want them to.’”