WaPo: Conservatives gearing up to pounce over anti-Catholic rhetoric in SCOTUS fight 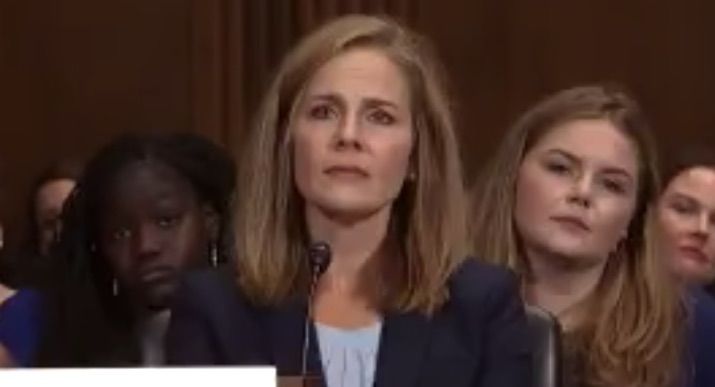 Normally, we’d scoff at a “pounce” narrative, but in this case it’s justified — across the aisle and the political/media spectrum, too. Thanks to Senate Democrats’ attacks on Amy Coney Barrett in her 2017 appellate confirmation hearing, their hostility to practicing Catholics on the bench practically invites another fight over faith in the upcoming hearings. Dave Weigel reports that both sides have to strategize over Catholicism, and that battle has a long, long history:

By Saturday, the president will announce a female, Catholic nominee for the Supreme Court. The favorite is Amy Coney Barrett, who became a conservative star because Democrats set out to criticize the role of her faith in her decisions, and they botched it. Soon, as conservatives see it, Americans will meet the Indiana judge, view her warmly and then recoil as Democrats unleash the most anti-Catholic campaign since the 1920s.

“Oh Lordy! The anti-Catholic bigots are coming out of the woodwork and crawling out from under the rocks now!” wrote Robert P. George, the conservative Catholic academic who founded the American Principles Project, on Monday. “And Amy Coney Barrett hasn’t even been nominated (yet).”

Just in case anyone has forgotten how Democrats “botched it,” here’s a report from EWTN at the time of Barrett’s confirmation vote. “The dogma lives loudly within you,” Sen. Dianne Feinstein (D-CA) intoned, “and that’s a concern.” Feinstein wasn’t alone in questioning Barrett over faith either, with Dick Durbin forced to defend himself later against charges of anti-Catholic bigotry:

While Democrats have suggested they want a court fight to focus on the Affordable Care Act and the future of abortion rights, many conservatives are girding for a fight over religious faith and see opportunities if Joe Biden’s party can be portrayed as bashing Catholics. Democrats want the court fight to center on health care, voting rights and abortion rights; Republicans are hoping for liberal paranoia about a nominee’s religion to overwhelm it all.

Liberals, having lost the fight against Barrett’s 2017 confirmation to a lower court, barely remember how Sen. Dianne Feinstein (D-Calif.) said that “the dogma lives loudly within” the Notre Dame professor. Conservatives have never forgotten it and believe that Democrats and (far more likely) liberal pundits will become so unglued by the prospect of a Catholic woman undoing Roe v. Wade that it will backfire and lose voters.

Don’t write off the Senate Democrats from the Unglued Caucus just yet. They just had to glue themselves back together after shrieking for several days about the “constitutional damage” of the prospect of having a sitting president nominate an appointee for an open Supreme Court seat. Don’t think for a second that they won’t start freaking out over any hint of heterodoxy from the progressive paradigm, especially adherence to — or even sympathy for — Catholic teaching on family issues.

Professor C.C. Pecknold wrote about this true disconnect at that time in the Wall Street Journal. This is a religious fight, Pecknold argued, one between the religion of progressivism and all other comers. Progressivism tolerates no other gods, it seems:

Sens. Feinstein and Durbin were troubled not by Ms. Barrett’s Catholicism, but by her failure to prove her religion could conform to a more dogmatic progressivism. The “religious test” Democrats want to impose isn’t about religion per se; it’s about ensuring that every religious claim can be bent to more comprehensive political aims. It’s about defining anyone who dissents from the mores of the sexual revolution as disqualified from public office. That’s what makes Ms. Feinstein’s questioning so chilling.

Few liberals have spoken out against these religious tests, providing tacit consent for the Democratic Party to continue the practice. One of America’s major political parties appears prepared to consent to a very different kind of creed from the one the American founders envisioned. Our forefathers understood religious freedom in positive terms, as freedom for the highest good, God. This “first freedom” was held as the basis of all the political freedoms, including the freedom to dissent and to disagree on matters of law and politics.

Ms. Barrett has spent her career honoring the older creed—not only with her Scalia-like deference to the law, but through respect for freedom of religion and conscience. Ms. Feinstein honored the new creed, the one dividing an already polarized nation. A dogmatism now threatens countless Americans’ freedom, and it isn’t Catholicism.

This is why that dogmatic conflict will arise and contort the Senate Democrats in the hearing, as well as the pundit class outside of it. Feinstein and her minority on the Senate Judiciary Committee can brook no contradiction from their own dogma. Add to that the desperate need to paint the nominee as illegitimate by any means necessary, and we have all the elements in place for another meltdown. If Feinstein et al doesn’t deliver on it in the hearing, progressives will erupt in fury and frustration over that, too — and that will do its own damage to Democrats on the eve of the election.

That’s a fight that Donald Trump will relish, of course. It’s why Barrett is favored by many to be his choice to replace Ginsburg, but is that the only choice that might deliver on this potential for Trump?  Weigel mentions parenthetically that fellow shortlister Barbara Lagoa is also Catholic as well as being a Hispanic from Florida. Lagoa is slightly older than Barrett but is still in her early fifties, leaving the potential for decades of service on the court.

Lagoa has other selling points as well — more experience on the bench, for one thing. One rational knock on Barrett for the appellate appointment was that she hadn’t any judicial experience. Lagoa has been a judge since 2006 in Florida’s system, and served for a year as the first Hispanic woman the Florida Supreme Court before being appointed last year to the federal bench. Lagoa is well-liked among Florida’s conservatives, and she would give Trump an opportunity to appoint both a female and a Hispanic to the court — right before an election where the Hispanic vote could be critical in states like Florida and Arizona. That’s especially true if Senate Democrats try to go the full Kavanaugh against Lagoa, and risk a backlash from both women and Hispanic voters over it.

Reportedly, Trump has wanted Barrett for a long time and had her in mind for Ginsburg’s replacement all along, if that came up. Maybe his mind has already been set on Barrett. But given how his political instincts usually override his other considerations, don’t be surprised if it turns out to be Lagoa.