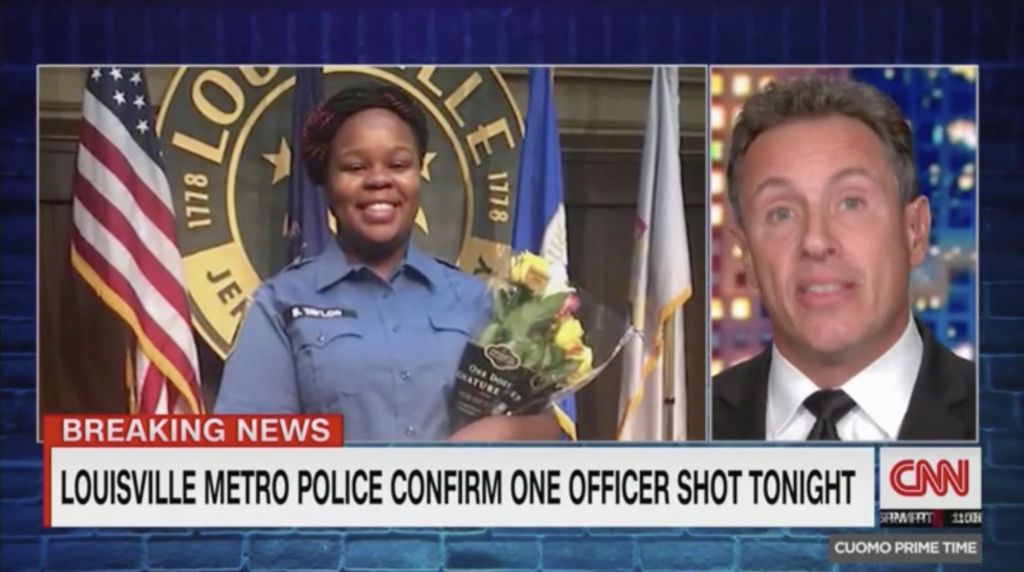 CNN’s Chris Cuomo blatantly lied to his audience on “Cuomo Prime Time” Wednesday night about ballistic evidence central to the decision made in the Breonna Taylor case earlier that day.

According to Cuomo, it was “unclear” if one of the cops was shot by Taylor’s boyfriend or his own officers.

“A cop was hit at some point. Horrible. Officer Mattingly. But by whom? By Walker or friendly fire? Ballistics make it unclear,” Cuomo stated.

During a press conference earlier in the day, however, Kentucky Attorney General Daniel Cameron explicitly stated that “there’s no evidence to support that Sergeant Mattingly was hit by friendly fire from other officers.”

“In addition to all the testimony, the ballistics report shows that the round that struck Sergeant Mattingly was fired from a nine-millimeter handgun. The LMPD officers fired 40 caliber handguns,” Cameron explained.

While CNN pledges devotion to “fact-checking,” they failed to acknowledge the reporting mistake by Cuomo, who was an Emmy Award nominee and winner for his journalistic work and “had his highest ratings in history for the past two months” this summer.

On the same segment Wednesday night, Cuomo admitted that “it is not easy to accept why the police were justified in not just shooting, but killing a non-shooter.”

“Breonna Taylor was an innocent party. Streets filling with people who are outraged who don’t understand. Who need counsel. Who need guidance. And in the absence of that, we must have concern of what happens next,” Cuomo warned.

Despite Cuomo’s misleading coverage of evidence in the Taylor case, Cameron also specified at the press conference that two of the three officers were “justified in their use of force.”

“I think it is worth repeating again that our investigation found that Mattingly and Cosgrove were justified in their use of force after having been fired upon by Kenneth Walker,” the attorney general stated.

Police killed Taylor in March by returning fire on her boyfriend after he shot at officers when they raided the apartment as part of a drug investigation. Many people objected to her death and called for the cops involved to be arrested and charged, but began to riot after it was announced that a grand jury indicted only one of the three officers in the shooting, Brett Hankison, with three counts of first-degree wanton endangerment. Two Louisville Metro Police Department officers were shot on Wednesday night during the riots but are in stable condition.