McConnell: We’ll have a fair hearing for the SCOTUS pick, followed by a first-class confirmation 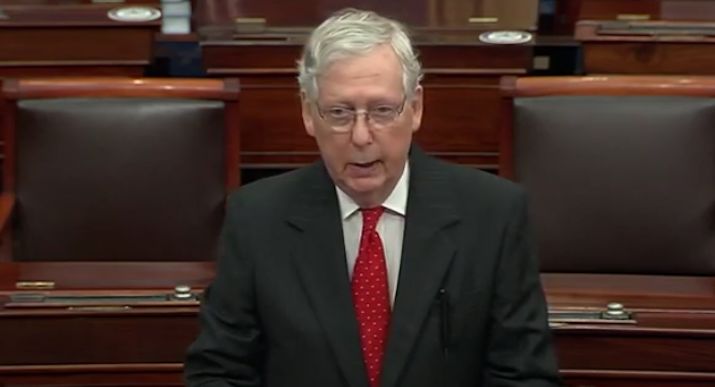 Will they or won’t they? Ever since Rush Limbaugh suggested skipping the confirmation hearing for Donald Trump’s upcoming Supreme Court nominee, people have wondered whether Lindsey Graham and Mitch McConnell would just have the Judiciary Committee vote on the basis of a previous confirmation process. That would be easy enough to do with either Amy Coney Barrett or Barbara Lagoa, both confirmed to the federal bench since 2017, although perhaps tougher to justify for others.

In a floor speech this morning, McConnell sounded as though he was setting up an argument that a hearing wouldn’t be necessary. “Far left” attacks on Republican nominees are all the same anyway, McConnell argued, “every single time.” Remember, for instance, when the Supreme Court was about to start  “ending freedom for women in this country” with the addition of … David Souter? Good times, good times:

We do not yet know which legal all-star from his list he will nominate. But strangely enough, we already do know exactly what the far left will start shouting the instant she or he is introduced. Isn’t that a little curious, when you stop to think about it? A confirmation process is ostensibly about the qualifications and credentials of the nominee.

So why is it that practically any citizen could sit down at their kitchen table right now, days before the nomination, and write down in advance the list of ludicrous accusations the far left is guaranteed to be screaming by Saturday night? It’s because year after year, decade after decade, the far left’s playbook stays exactly the same. …

In 1990, they got the band back together yet again. This time, the sky was falling for sure. President Bush had picked someone whose record was ‘very troubling’… whose jurisprudence would surely, quote, ‘threaten to undo the advances made by women, minorities, dissenters, and other disadvantaged groups’… whose confirmation would mean, quote, ‘ending freedom for women in this country.’

Talk about wearing out the volume knob. Oh, that was future Justice David Souter, by the way. One slogan simply said ‘Stop Souter Or Women Will Die.’ He, too, would go on to become a favorite Justice of many of these very same groups.

McConnell could have argued from his second history lesson in as many days that a confirmation hearing was essentially meaningless. Why bother with yet another rerun? However, at the very, very end of his speech, McConnell commits to a hearing anyway — albeit a more focused hearing, McConnell hopes:

A fair hearing, a fair process, and fair vote on the actual nominee. Forget about fill-in-the-blank.”

A fair hearing, whose outcome won’t at all be in doubt, nor will the floor vote that takes place shortly afterward. To the extent that the hearing becomes “unfair,” McConnell sounds prepared to make a public case of it being scripted hysteria rather than legitimate criticism of the nomination. And if it gets really ugly, as in Kavanaugh-character-assassination ugly, McConnell might not even need to make a public case. Voters will see it for themselves right before they make their final ballot decisions.

Watch the whole speech, the second classic in as many days for McConnell:

Note: The headline references a line from Silverado spoken by Brian Dennehy, in which he promises Danny Glover to “give you a fair trial, followed by a first-class hanging.” In an utter failure of our culture, that clip is nowhere to be found on YouTube. Come on people …