“Aw, come on, Rush. It’s all baked in by now,” and then we had the death of a Supreme Court justice and it just… It changed everything. Now COVID’s not an issue. Nothing the Democrats were planning on being an issue is an issue. In addition to that, they’re panicking on ABC because Trump is now beginning to show leads in battleground states. This is Robin Roberts and Cecilia Vega at ABC… 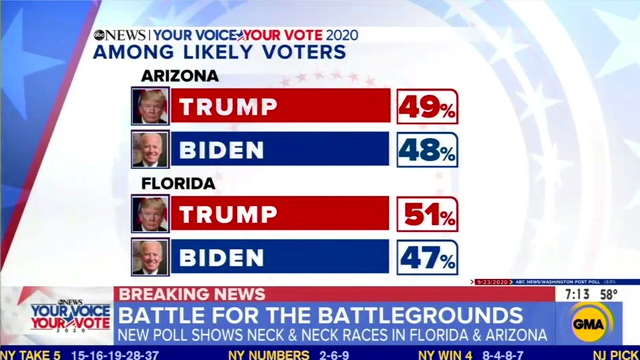 ROBERTS: These debates, they’re vital in this presidential election because our new polling showing that the race still so close in key battleground states. Is that the case?

VEGA: Yeah, exactly. We’ve got some new polling in. Let me show it to you now. Uh, we’re talking about Arizona and Florida —

VEGA: — states that Trump won back in 2016, and right now it looks like the president has a slight edge among likely voters in both those states.

VEGA: In Florida, Biden, he’s got tepid support among Latinos right now, Robin, and the president, he’s really winning on the economy overall. Voters overwhelmingly favor him to handle it over Joe Biden right now. 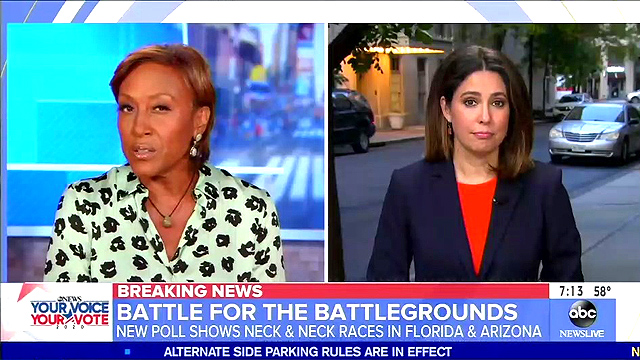 RUSH: Oh, no! Oh, no! Did you hear that? In polling, Trump has a slight edge among likely voters in their states. Biden’s support is “tepid among Latinos.” Well, wait a minute. I thought Biden was up eight, 10, 12, what have you. Now in the…? (interruption) I know.