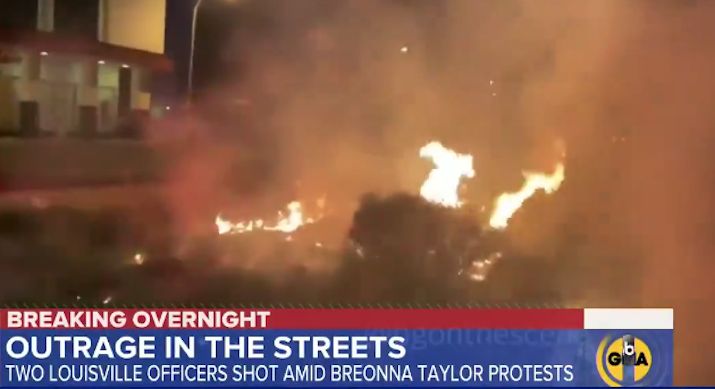 This time, everyone knew it was coming … and yet only the activists seemed prepared for it. After a grand jury indicted only one officer in the Breonna Taylor case — and not for Taylor’s death — demonstrators poured into the streets of Louisville and other cities across America. Two police officers got shot in Louisville, while a video of a confrontation in Seattle shows a cop getting hit by a baseball bat.

The shootings in Louisville prompted Kentucky governor Andy Beshear to do what he should have done earlier in the day — impose a curfew:

Protests in Louisville turned violent as police said two officers were shot during demonstrations that erupted after a Kentucky grand jury on Wednesday indicted one officer for allegedly endangering the neighbors of Breonna Taylor during the police shooting that resulted in her death.

The Louisville Metro Police Department provided limited details about the shooting, which took place just before the 9 p.m. curfew went into effect. Both officers are stable and have non-life-threatening injuries.

“I am very concerned about the safety of our officers,” interim Police Chief Robert Schroeder said at a press conference Wednesday night.

Both officers are expected to survive, although a gunshot to the abdomen is a difficult wound to predict. Earlier in the day, Beshear had called up 500 National Guard troops to assist local police in maintaining order. It’s unclear what impact they had, but apparently the numbers weren’t enough to keep riots and mobs from forming in the streets:

About 500 Kentucky National Guard members have been sent to Louisville on Wednesday amid the fallout from the grand jury decision in the Breonna Taylor case.

The guard members are providing “civil disturbance support” to the Louisville Metro Police Department and are protecting “critical infrastructure sites,” such as hospitals, in and around Louisville.

The city had reportedly geared up for problems once they knew the grand jury had finished its work on the Taylor case. However, they were not the only people to prepare. Townhall’s Julio Rosas captured this moment on video yesterday shortly after the grand jury report was released, which shows just how prepared the activists were for what followed:

While the BLM crowd was marching in Louisville, a U Haul truck pulled up with shields and supplies for the group to use. pic.twitter.com/VestCPdyTk

Protests erupted in other cities as well. In Minneapolis, a contingent of BLM marched down Interstate 94, which connect the Twin Cities, but thus far no reports of violence have emerged. The Associated Press called the Louisville protests “largely peaceful,” which may make their credibility on other protests a bit suspect in this report:

Hundreds of demonstrators chanted Taylor’s name and marched in cities like New York, Washington, D.C., Philadelphia and Las Vegas. People gathered in downtown Chicago’s Millennium Park, chanting demands for justice as passing drivers on Michigan Avenue honked their horns. Authorities unleashed chemical agents on some protesters after they tried to climb on a SWAT vehicle in Atlanta and others were arrested.

While protests in Louisville had been largely peaceful, scuffles broke out between police and protesters and some people were arrested before the two officers were shot while investigating reports of gunfire Wednesday night.

That ain’t “largely peaceful,” pal. Scuffles, arrests, and gunshots at police are the opposite of “peaceful.” Those are called riots.

Antifa asked the student journalist to remove the video to protect the safety of the people who attempted to murder the police officer. pic.twitter.com/PABzjMETLF

Cheong grabbed it before it could be memory-holed, after Antifa activists implored the videographer to trash it lest the largely peaceful batter be identified. She complied, but it was too late:

Okay folx, given some critical feedback, I have removed all videos that could compromise identification of protestors. I am not interested in promoting the identities of who are involved in the demonstrations. Thanks for everyone who messaged me.

This is one reason why Antifa activists will occasionally attack people who take video of their exploits. They don’t want to be identified committing their crimes. If their actions were as peaceful as media outlets want to paint them, that wouldn’t be a problem. And if the violence wasn’t part of their movement and are instigated by outsiders, as they claim, then why would they want to prevent those outsiders from being identified?

No one except their sympathizers are fooled by the “outsiders” claim. Everyone else recognizes this as a violent social movement at this point, and that will have a major impact on their decisions regarding public policy over the next few weeks. How many people who see these riots and the ugly confrontations in sidewalk restaurants will decide that fewer police are necessary? Or that these rioters’ political allies should get elected to office?