Seattle Police Officer Gets Knocked Down, BLM Rioter Runs Up and Hits Him With Baseball Bat (VIDEO) 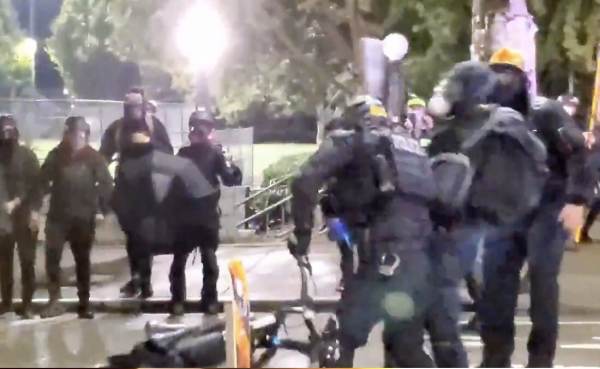 A Seattle Police officer was struck with a baseball bat by a Black Lives Matter militant after having a barrage of projectiles thrown at him.

The attack came just hours after two police officers were shot during the riot in Louisville over the grand jury decision in the Breonna Taylor case.

The attack was caught on camera by Seattle Collegian reporter Alexa Villatoro.

In the shocking footage, an officer is seen falling from his bike as rioters begin throwing objects at him. It is not entirely clear if the rioters made him fall or if it was an accident.

As he is collecting himself, and dodging items like a traffic cone that were being thrown at him by the militants taunting him, a masked militant in black bloc attire comes up and hits him in the head with a baseball bat at full force.

The condition of the officer is currently unknown. It is also unknown, at this time, if the attacker has been arrested. The Gateway Pundit will be providing updates as the story unfolds.

Around the same time as the attack in Seattle, rioters in Portland cheered after throwing a massive Molotov Cocktail or similar explosive at police officers.

What the fuck did they just throw at police? Mega molotov?? #Portlandprotests pic.twitter.com/AzXJOzDj26

Police Officers are now getting hit with Molotov Cocktails pic.twitter.com/wNfNf4X1UE

CNN will surely deceive their viewers tomorrow by calling these “mostly peaceful protests” once again.