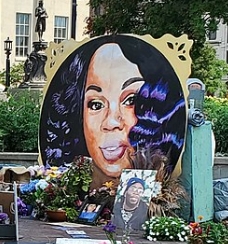 The truth has finally emerged about Breonna Taylor’s death this past March.  It turns out (surprise!) that the Democrat party — in Congress, in the media, and on the streets — has been lying.  Taylor was not a complete innocent whom racist police slaughtered in her bed during a no-knock raid.  Instead, she was the victim of her poor choices in men: her friendship with a local drug kingpin justified the raid, and her boyfriend’s decision to open fire on police who had knocked and identified themselves led to her shooting.  That certainly doesn’t mean she deserved to die, but it explains why she did.

The case begins with Breonna’s ex-boyfriend, Jamarcus Glover.  The Louisville Courier-Journal delved deeply into that relationship, while the following is a summary.

Glover is an accused drug-trafficker who is believed to be part of a large drug- and weapons-trafficking ring in Louisville.  According to an affidavit, Glover went to Taylor’s apartment in January, left the apartment holding a package, and went straight to a “known drug house.”

That wasn’t Glover’s only trip to Breonna’s apartment.  Police had placed a tracking device on Glover’s car, which showed he made frequent trips to her apartment, leading police to believe that her apartment was a holding place for drugs and money.  Glover was also heard telling someone that Taylor handled his money, although there is no evidence that this statement was true.

Taylor also seemed familiar with Glover’s world of drugs.  When he was arrested in January, he called to ask her to locate an associate who could post bail.  She answered that the associate was “already at the trap,” slang for a drug-trafficking house.  On another occasion, Taylor posted a $2,500 bond for Darreal Forest, another man who police suspect was involved in the drug ring.

The Courier-Journal has still more evidence of the close connection between Glover and Taylor.  That’s why the police got a warrant to search Taylor’s house.

Whether or not Taylor was involved in the drug and weapons ring, she ran with a bad crowd.  She would have done well to heed Aesop, who warned, “If you choose bad companions, no one will believe that you are anything but bad yourself.”

Taylor didn’t choose any more wisely when it came to her boyfriend, Kenneth Walker.  He was the reason the police shot Breonna.

Kentucky attorney general Daniel Cameron held a press conference on Wednesday, explaining all of the grand jury’s findings.  The most important one was that the police did not do a no-knock raid.  That was what everyone was told to justify why Breonna’s boyfriend, Walker, shot at the police when they entered the apartment:

Evidence shows that officers both knocked and announced their presence at the apartment. The officers’ statements about their announcement are corroborated by an independent witness who was near in a proximity to apartment four. In other words, the warrant was not served as a no-knock warrant.

When Walker and Taylor did not answer the door, the officers broke the door.  Sergeant Mattingly entered, saw Walker with a gun pointed at him, and felt himself get shot.  It happened that quickly.  Walker confirmed that he fired the first shot, and ballistics shows his bullet wounded Mattingly.

At that point, all of the officers opened fire.  As a reminder, they did it because one of their own had taken a bullet, and they all knew that they were in a kill or be killed situation.  Moreover, the barrage of bullets they fired (32 bullets) was appropriate.  The magical single shot that takes out the bad guy in Hollywood movies doesn’t exist.  Once you start shooting, you must shoot to end the threat completely.

Six of the bullets struck Breonna.  It’s telling that none hit Walker.  Had he run away or hidden behind her?  Or was she just very unlucky?  Cameron doesn’t say.

Concerning the fatal shots, Cameron debunks another lie.  The media claimed that Breonna was in bed, implying a passive figure whom the police massacred.  In fact, Taylor was standing at Walker’s side, and she knew or should have known that Walker was armed:

Sergeant Mattingly identified two individuals standing beside one another at the end of the hall, a male and a female. In his statement, he says that the male was holding a gun, arms extended in a shooting stance.

Both Cameron and the grand jury showed real bravery in refusing to indict police officers who did everything by the book, only to find themselves under fire.  Although she did not deserve to die, the fact is that Breonna made terrible choices when it came to the men in her life.  These choices started a chain reaction that ended with her dying almost instantly from one of the six bullets that hit her.