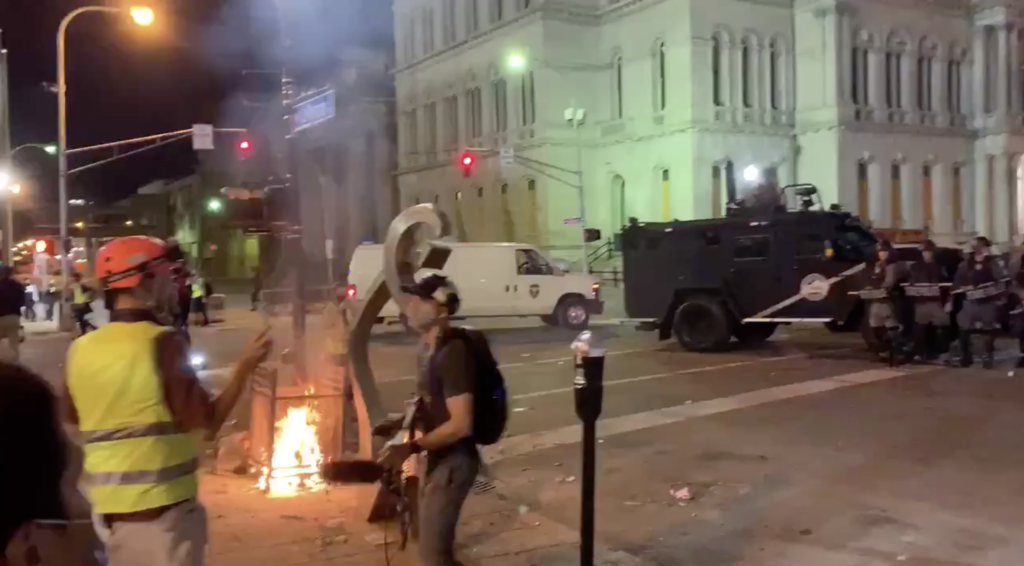 Two Louisville Metro Police officers were shot on Wednesday night as riots erupted around Louisville in wake of a grand jury’s decision announced Wednesday afternoon in the Breonna  Taylor case.

Police killed Taylor by returning fire when a man she was standing next to shot at officers as they opened her apartment door while executing a drug raid. Taylor is black, which rioters claim means her death was racially motivated despite a lack of evidence for that claim.

The Interim Louisville Chief of Police Robert Schroeder announced both officers are “stable” and a suspect was arrested, but that he is “very concerned about the safety of our officers.”

We’ve just received an update from the chief of police in Louisville. There is one suspect in custody in relation to the two officers shot earlier tonight — one officer is undergoing surgery, both are “stable.”

“I am very concerned about the safety of our officers,” he says. pic.twitter.com/ErRjPWLA2e

According to Kentucky Attorney General Daniel Cameron, a grand jury indicted one of the three officers in the shooting, Brett Hankison, with three counts of first-degree wanton endangerment after he “fired through a window into [Taylor’s] apartment the night she was killed.”

Mayor of Louisville Greg Fischer issued two executive orders on Tuesday in anticipation of the announcement and the violence that might follow. One was a “state of emergency due to the potential for civil unrest, which allows him to exercise any of his emergency powers, including those to hire or contract for services, and implementing curfews and other restrictions” and another which “restricts access to five downtown parking garages and bans on-street parking in order to provide an extra layer of security for protests in and around Jefferson Square Park.”

He also issued a curfew for Jefferson County starting at 9 p.m. every night and going until to 6:30 a.m. for Wednesday, Thursday, and Friday. These curfews, however, were lost on rioters, who smashed windows, threw projectiles at officers, and set fires at Louisville’s Hall of Justice in downtown.

Police officers just came out of the Hall of Justice to put out the fires. One officer was hit with something and fell to the ground. Some in the crowd cheered.

Officers retreated back into the building pic.twitter.com/JNBbbtoT1s

Lots of windows are being smashed throughout this march. Right before the crowd left Jefferson Square, a loudspeaker announcement reminded everyone that it’s been declared an unlawful assembly pic.twitter.com/NOQ1zZpOG4

“Go home tonight. There will be many times over the coming days where there will be an opportunity to be heard. And so many people are listening right now,” he said in a statement video posted to Twitter. “As your governor, I promise to listen. Let’s make sure we don’t see any more violence tonight.”

A message from Governor Beshear on events tonight in Louisville. pic.twitter.com/XK8FZSXy8D

Two accredited reporters from the Daily Caller were arrested as police began corralling rioters and detaining them. Despite efforts from the Caller’s editor in chief to explain that they are members of the press, the LPD reportedly told him that they “will be processed and charged like everyone else.”

Just got arrested by #Louisville PD. I will update everyone when I’m released.

We are all on the ground right now and police are taking people and putting them in zip tie cuffs pic.twitter.com/eIJJF1t1Ub

Update: The Louisville doc tells me @ShelbyTalcott and @VenturaReport will be processed and charged like everyone else, despite my best efforts to alert official channels that they were operating in the capacity of press at a live news event. @LMPD

The crowd’s initial reaction to the afternoon announcement indicated that violence might surge because of the ruling and a group of people began to form a march. Videos show people gathering supplies such as water, shields, and signs calling for the abolishment of police from the back of a truck that was parked on the scene.

Here’s how the crowd reacted after hearing these are the only charges brought today + the bond amount. People are angry, sad: pic.twitter.com/xbOy1Asvdh

At least 150 people in the intersection of 6th and Broadway in Louisville following the announcement that just one of 3 officers will be indicted in the Breonna Taylor case pic.twitter.com/iWmnr5vbge

A parked U-Haul was waiting for the crowd up the street. It contains supplies such as signs, shields, water etc. I’m not sure how people knew what it contained. Police are up ahead pic.twitter.com/qObHK3E83y

Protesters have three wood shields at the head of the march pic.twitter.com/1FBgAGlTt1

Reporters on the ground say that police arrived in riot gear and arrested several people. They also “fired pepper balls” after the crowd began throwing water bottles at them.

Police in riot gear are blocking off Bardstown road. There have been several arrests. pic.twitter.com/x5hxKGGlud

Here’s the scene. Pepper spray is in the air. There have been multiple arrests. pic.twitter.com/x1k13mnExq

Police officers surround the crowd after some pushing and shoving. Multiple people have been detained and some crowd control munitions were deployed: pic.twitter.com/d5z8elO5Dj

Others reported that windows were smashed and protestors were harassing business owners and other individuals about joining the march.

Wednesday afternoon, police eventually declared the gathering an unlawful assembly and ordered the crowd to disperse.

“If you do not do so we may dismiss chemical agents and you will be arrested,” a voice announced over a loudspeaker.

There was one more announcement of unlawful assembly. Pretty quiet here as police block the road and protesters look on. pic.twitter.com/x4EA5MAIAq

The now-familiar “move back” chant from police is heard here as they push back stragglers from the crowd, which has largely dispersed. pic.twitter.com/whTP48db60

FBI Louisville and @LMPD are seeking the public’s help regarding the shooting of LMPD officers on 09/23/2020. Anyone with pictures or videos of the incident is asked to provide those files using https://t.co/6PCitiZl9J.