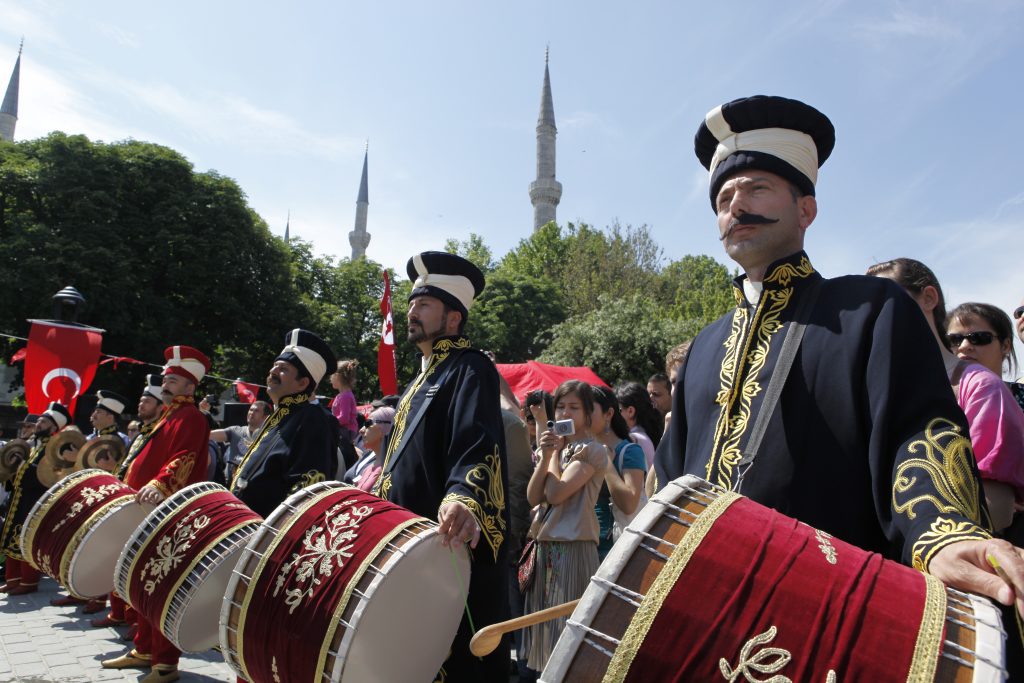 The Turkish government’s new ideology of conquest is now on full display.

Their Ministry of Communication’s latest government music video, focusing on the Turkish military, presents Turkish president Recep Tayyip Erdogan as heir to the Ottoman and Seljuk dynasties and portrays Turkish conquerors praying in the Church of Hagia Sophia, the former Byzantine basilica that recently was converted into a mosque.

The Middle East Media Research Institute (MEMRI) reported on September 1, “The clip cuts between images of the Turkish military, including special forces, tanks, fighter jets, attack helicopters, rockets, naval vessels, and images of men in Ottoman and Seljuk military garb. The video also shows the Turkish drill ships Fatih and Oruç Reis, which have recently been drilling and searching for natural gas in the Mediterranean Sea and the Black Sea.” MEMRI continues:

The music features the zurna, a wind instrument central in the traditional Ottoman military band, giving the music a distinctly ‘Ottoman’ sound. The lyrics mix religious and nationalistic imagery and refer to the Kızıl Elma (‘Red Apple’), a concept from Turkish mythology that has sometimes been used to refer to world domination and at other times has referred to a particular military goal by a Turkish state…

Some of the lyrics of the music video include:

May the sound of ‘Allah Akbar’ rise to the ninth heaven. Allah! Allah! We will not turn back! Strike so that the tyrant wails, may the seven worlds hear our sound of freedom…

Those crazy Turks, for the sake of the crescent, will give their heads anywhere in the world. Come, my Turkey, for the love of Allah. Put another stamp on history. O great nation, on behalf of the homeland, [you’ve come] to inspire the generations again…

This blood is Sultan Alparslan, who reared up at Manzikert, Osman I, at the founding. The sultan of the world, who was given good news of conquests and the child heroes at Gallipoli. This same blood comes from the ancestors. It is writing legends again in resurgence. The world is waiting for ‘There is no god but Allah.’ The destination is the Red Apple, we will not despair. Like Alparslan who reared up at Manzikert, like our ancestors, who wrote history with victories, like our grandfather, who closed one age and opened another, our goal is the Red Apple. Forward march!

The Battle of Manzikert referred to in the video happened in the 11th century. Manzikert (today’s Malazgirt) was then a majority-Armenian city within the borders of the Greek Byzantine (Eastern Roman) empire. Beginning around 1019, Turks started targeting and capturing Christian cities across Armenia and Asia Minor and massacring their inhabitants. Historian Raymond Ibrahim documents the mass murders, looting and other crimes committed by Seljuk Turks in Manzikert in his article “Battle of Manzikert: The ‘Subjugation of Christianity by Islam.’”

A Muslim dynasty of Turkic descent, the Seljuks invaded parts of southwestern Asia and the Middle East from the 11th to 14th centuries. The empire they established included vast lands such as Asia Minor, Armenia, the Levant, Jerusalem, the Hindu Kush, Central Asia, and the Persian Gulf. Their advance marked the beginning of Turkish presence in the Middle East. The video declares Turkey and Erdogan heirs to the Seljuk dynasty.

Another invasion that Turkey has traditionally celebrated for decades is the 1453 conquest of Constantinople by Ottoman Turks. Constantinople was the largest and wealthiest city in Europe from the mid-5th to the early 13th century, and the Hagia Sophia was the spiritual center of the Eastern Roman (Byzantine) empire, built by Justinian I in the 6th century.

On May 29, 1453, following a seven-week siege, the Ottoman army, led by Sultan Mehmed II, also known as Mehmed Muhammad the Conqueror, invaded and captured Constantinople. Hagia Sophia was then forcibly converted to a mosque.

Dionysios Hatzopoulos, a professor of classical and Byzantine studies, describes what happened after the city fell to the Ottoman Turks:

The great doors of Saint Sophia were forced open, and crowds of angry soldiers came in and fell upon the unfortunate worshippers. Pillaging and killing in the holy place went on for hours. Similar was the fate of worshippers in most churches in the city. Everything that could be taken from the splendid buildings was taken by the new masters of the imperial capital. Icons were destroyed, precious manuscripts were lost forever. Thousands of civilians were enslaved; soldiers fought over young boys and young women.

The Ottoman Empire, founded in 1299, lasted for about 600 years. Ottoman Turkey committed genocide against Greeks, Armenians and Assyrians from 1913 to 1923. The empire was officially disbanded with the establishment of the Republic of Turkey in 1923.

In 1930, Turkey officially renamed Constantinople “Istanbul” and reopened Hagia Sophia as a museum in 1935. The historic church was converted back into a mosque on July 24 of this year.

Despite the “secular” constitution of the Turkish republic, the persecution of Greeks and other non-Muslims continued during the republican period. For example, in 1941-1942, all non-Muslim males were enlisted in the Turkish military—including the elderly and mentally ill—and forced to work under extremely severe conditions in labor battalions. In 1942, a “wealth tax” was imposed to eliminate Christians and Jews from the economy. In 1955, an anti-Greek pogrom rocked Istanbul, and in 1964 virtually all the remaining Greeks were forcibly expelled from the country.

According to Professor Alfred de Zayas, the 1955 Istanbul pogrom “can be considered a grave crime under both Turkish domestic law and international law. In the historical context of a religion driven eliminationist process accompanied by many pogroms before, during, and after World War I within the territories of the Ottoman Empire, including the destruction of the Greek communities of Pontos and Asia Minor and the atrocities against the Greeks of Smyrna in September 1922, the genocidal character of the Istanbul pogrom becomes apparent.”

Istanbul’s current Greek Orthodox population is estimated to be around 1,500. Despite the Turks’ centuries of atrocities against Greeks and other Christians, the Turkish government shows no signs of remorse and no willingness to apologize or compensate. On the contrary, Turkish officials often express either denial of or pride in their own historical and current crimes. Turkey’s treatment of Christians demonstrates that they have engaged in perpetual jihad against Christians and other non-Muslims. And they are now pursuing aggressive regional expansion and openly threatening Greece, France and some North African and Gulf countries. In a speech in Ankara on August 30, Erdogan said, in part:

As some historians have said, we are not a society that has an army—we are a nation that is itself an army… With Allah’s permission, there is no power that can stand in the way of this country.

We do not run away from a fight. We will not hesitate to sacrifice martyrs and wounded people in this fight. For our independence and our future, we will not hold back from roaring all together as 83 million people and running over the dams that get in our way, like a flood.

There are several reasons why Turkey is so blatantly aggressive both in domestic politics and foreign policy. Traditional Turkish expansionism and nationalism, neo-Ottomanism and the belief in jihad and conquest in Islamic doctrine are major ones. But another reason is that Turkey has never been held accountable by the international community for any of the crimes it has committed throughout its history.

The awkwardness of the prevailing situation can be demonstrated by a hypothetical example. How would the international community have reacted if the post-war German government had named streets after Josef Goebbels and Reinhard Heydrich, the architects of Kristallnacht? What would the reaction of the international community have been if, instead of making moral and material reparation, the German government had refused to render restitution and compensation to the victims and their survivors?

Uzay Bulut is a Turkish journalist and political analyst formerly based in Ankara. Her writings have appeared in The Washington Times, The American Spectator, The Christian Post, and The Jerusalem Post, among many other news outlets. Bulut’s journalistic work focuses mainly on human rights, Turkish politics and history, religious minorities in the Middle East, and antisemitism.