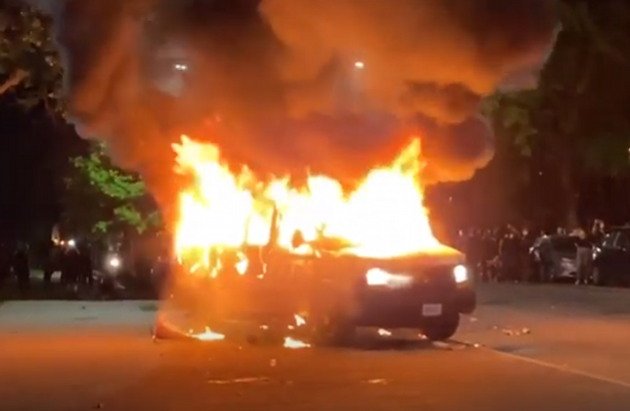 Support for left wing social justice protests has dropped by a full fifteen percent, a recent poll has found.

The American people were supportive at first, because Americans are good people who believe in justice, but the constant protests, many of which have devolved into destructive riots, have exhausted the public’s patience.

This isn’t really a mystery.

TRENDING: This Is America? Young Mother TASED, CUFFED AND ARRESTED for Not Wearing Face-Mask at Mostly Empty Stadium to Watch HS Football Game

As the decision in Kentucky to bring charges against only one of three police officers involved in the raid that killed Breonna Taylor sparks renewed protests nationwide, a new survey finds support has fallen for demonstrations against systemic racism.

The poll from The Associated Press-NORC Center for Public Affairs Research finds that 44% of Americans disapprove of protests in response to police violence against Black Americans, while 39% approve. In June, 54% approved. The new survey was conducted Sept. 11-14, before Wednesday’s announcement that a lone Louisville police officer would be charged in the Taylor case, but not for her actual death.

Overnight, demonstrators in cities from New York to Las Vegas marched through streets and chanted Taylor’s name. Two officers were wounded by gunfire at protests in Louisville, where authorities made close to 100 arrests on charges of damaging businesses, refusing to disperse after curfew and unlawful assembly.

This really shouldn’t surprise anyone.

Wait, BLM is losing support because of some nationwide looting, arson, assaults, blocked highways, restaurant customers hassled , and cops getting attacked and shot? No way!

Burn more buildings and yell at more old people. That should help! https://t.co/wB0GEtLPy2

How did rioting and screaming at people minding their own business fail to win hearts and minds? https://t.co/CjUOn7GVwb

In many ways, the left is its own worst enemy.