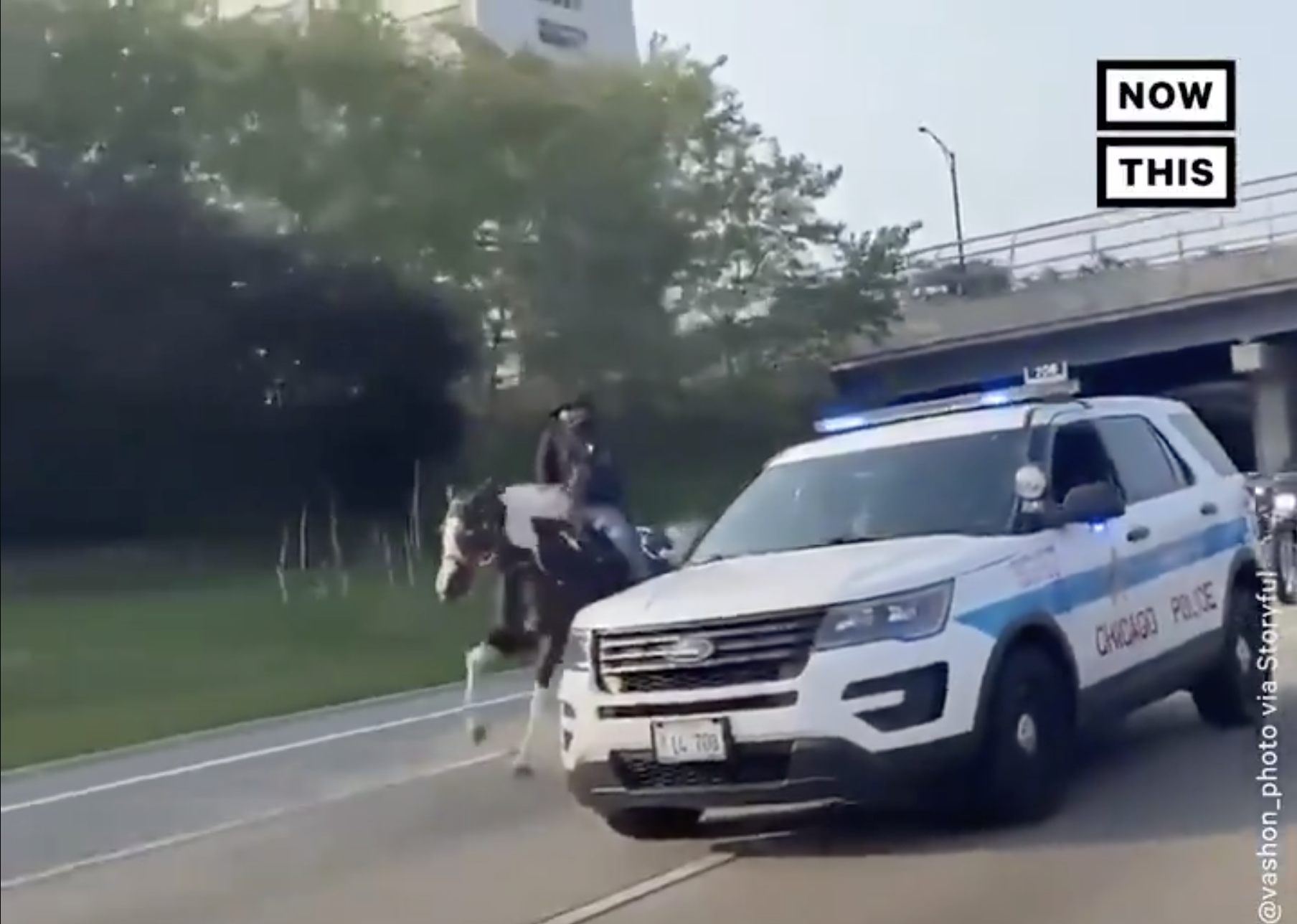 NowThis News positively portrayed an activist in Chicago who was arrested and charged with felony animal cruelty as well as misdemeanor counts of trespassing and reckless conduct for riding his whipped, kicked, and injured horse, NuNu, for at least seven miles down a Chicago highway during a protest in late September.

This ‘cowboy’ rode a horse down a busy highway in support of #KidsLivesMatter, a movement demanding greater investment in youth programs and other needs of children in Chicago pic.twitter.com/h9EM8oiyob

The protest, a caravan of cars led by Adam Hollingsworth, “the Dreadhead Cowboy,” stopped traffic while advocating for a movement called #KidLivesMatter which “demands greater investment in youth programs and other needs of children in Chicago” and calls for gun violence reform after rising violence in urban areas.

“Until we understand kids’ lives matter, nothing else matters,” Hollingsworth, “a well-known figure in the Chicago community” according to NowThis, said.

After Hollingsworth’s arrest, the horse was handed over to Animal Care and Control with multiple injuries which authorities say may warrant the horse’s euthanization. According to local news, Hollingsworth “whipped and kicked his exhausted and injured horse” which was not equipped with the proper footwear. While NowThis mentioned that the horse was hurt, it did not mention the severity of the injuries the horse sustained.

“[NuNu] will never be deemed suitable to ride again, and euthanasia may be utilized for humane reasons due to the suffering the animal will likely endure for the rest of its life,” Assistant State’s Attorney Kevin Deboni told Cook County Judge David Navarro.

According to Deboni, Hollingsworth’s abuse of NuNu was equivalent to “making an 80-year-old woman run a full marathon.”

Hollingsworth previously stated that he would “ride his horse til it dies” on a Facebook video in June.

The incident and NowThis’s coverage of it received backlash from some who pointed out that the blatant overlooking of the animal abuse was immoral and wrong.

“Get it right,” said Dana Loesch. “He rode the horse ill-equipped to be on the pavement to the point of DEATH where the horse was BLEEDING PROFUSELY AND MAY HAVE TO BE EUTHANIZED, you abusive morons.”

Don’t sugarcoat this sick crap:
“NuNu collapsed at one point, but Hollingsworth whipped it to keep it moving, Deboni said. Two veterinarians who later examined the horse said it “suffered greatly, bled profusely”https://t.co/CCYqJPrKUf

Hollingsworth, however, said he would do it all again, claiming that it was worth it to bring attention to the cause.

“Yes, I’d do it again,” said Hollingworth. “I’ve been to jail. I’ve got a background. I’m not perfect. I would rather go to jail for something like (this). That is something worth going to jail for. I didn’t mean no harm on my horse, at all. I’m a horse- (and) animal-loving person. My focus is kids lives matter. And if a person can’t agree with that, I don’t know what to call you.”

Hollingsworth, who teamed up with Chicago Mayor Lori Lightfoot earlier in the year to bring attention to the census, started a GoFundMe so he could continue to travel with his horse and eventually build a barn “in the city will give children a sense of equality as the children that are more fortunate in other areas of Illinois.”